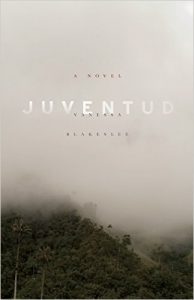 Blame radiates outward from the center of Vanessa Blakeslee’s new novel, Juventud, which begins in Santiago de Cali, Colombia, during the conflict between FARC and ELN in 1999. First-person narrator fifteen-year-old Mercedes Martinez blames her drug-trafficking father, Diego, for the death of her boyfriend Manuel, a Catholic peace activist. This assumption propels Mercedes to leave for Florida, and she doesn’t speak to her father again until she returns to Colombia at twenty-eight. When she returns, Mercedes learns her father was innocent in Manuel’s death. She worries Diego won’t allow her to reconcile. Mercedes is at least partly to blame for the disintegration of her relationship with her father, and Blakeslee’s prose (especially the strong sense of place and first-person narration) implicates the reader in Mercedes’ decisions.

“Not all of my choices, but certainly the ones that mattered the most, would have been very different had I not believed my father responsible for Manuel’s murder, had I been open to giving him a second chance. Had I only been able and willing to see the world in shades of grey, rather than black and white.”

Blakeslee urges readers to see the world in shades of grey as well—perhaps to make them feel spurred to action to solve conflicts in their own lives. In Juventud, readers can smell the arepas Manuel and Mercedes eat, feel the sheets wrapped around their legs after Manuel and Mercedes make love for the first time in Manuel’s apartment, hear the music to which Mercedes’ friend Gracia dances. In the beginning of the novel, Mercedes describes a young boy who has been displaced by the conflict. He holds a sign stating, “Ayuda. Somos desplazados.” Help. We are displaced. This moment serves two purposes: the boy’s sign reflects Mercedes’ emotional state during a time of violent sociopolitical upheaval, and also holds Mercedes—and Juventud’s readers—responsible for serving those ravaged by conflict. The use of the first-person plural—in fact, the first-person narration throughout the novel—brings the readers into a conflict with which they may have little experience.

By creating Cali and its inhabitants vividly, Blakeslee helps the reader feel with characters, instead of for them. Readers imagine themselves in Cali, imagine themselves up against the same moral issues as the characters. Mercedes’ fears at the end of the novel feel universal—readers can relate to her panicked thoughts about whether or not her father will allow a reconciliation.

The best fiction makes the reader agree to take an emotional journey even though the destination is unknown. Vanessa Blakeslee’s Juventud invites the reader to walk with Mercedes along the streets of downtown Cali, urges them to use the first-person plural as a call to action: Somos desplazados. We are displaced.

Allison Pinkerton holds an MFA in Creative Writing from the University of Central Florida. Her work has been published in The Review Review and was a finalist for the 2015 Fiction Southeast Editors’ Prize. She reads, writes, and teaches in Orlando.