Home
»
Book Reviews
»
Poetry
»
Review: LIKE THAT by Matthew Yeager 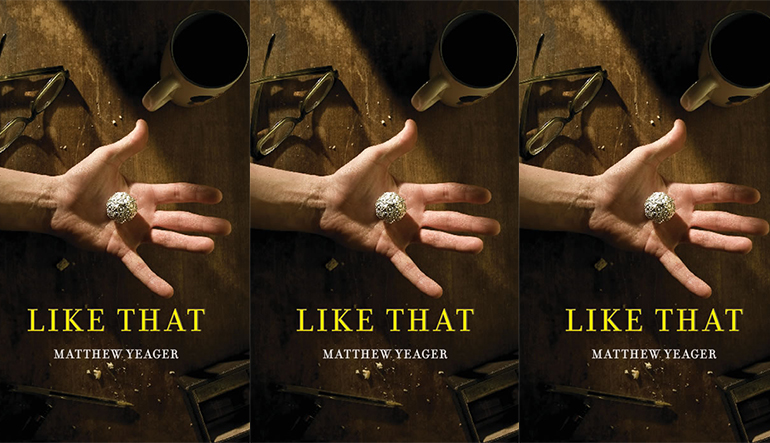 Because reading Matt Yeager’s first full-length collection, Like That, is like one of those times when, at a friend’s party perhaps, you strike up a conversation with a complete stranger and find yourself in intense discussion hours later, intimately interested in who this person is and how they see the world, let’s start with the introductions and first impressions. One hundred pages, six poems. A hand holding a small ball of foil reaches across the center of the cover, finger stretched, insistent or offering.

The first poem, “A Big Ball of Foil in a Small NY Apartment,” brings you into the mind behind the hand on the cover. The surprises of this poem are not in the narrative—that’s right there in the title and Yeager’s style is natural and conversational. Instead, the surprises come in subtle, lyrical moments. For example, “as his fingers opened out / into their individual selves again, and he saw the ball …” is a comfortingly familiar image with unique vision. The obsessive narrator gives into impulses we might recognize in ourselves, feels fascination, feels captive of their own choices, disillusioned…in short, it’s hard not to relate personally and see yourself reflected back at you in Yeager’s narrator.

The other “shorter” poems similarly call on familiar images and scenes and make them strange and fresh. “Tap Water” on the surface is about water (tap or bottled? is a bigger question than you might realize) but, deeper, it explores how we posit meaning in our relationships. By expanding on hypothetical relationships, the poem is also about how we find meaning in anything at all (like what kind of water you choose) as a way of understanding and loving. Which is exactly what Yeager’s up to with this collection: he builds meaning into the ordinary, makes it worth examining, and in doing so gives his readers connection and, yes, compassion.

“Sleep Mothers” folds incantatory refrains that are soothing as a lullaby, even as the mothers are haunting and death and time march inexorably on: “It is two it is four it is three in the morning / Think of their glasses on nightstands they are folded … They come to us, they whirl as loose nightgowns / in the night air above us it is like a Chagall…” We know those mothers; they are our mothers, even as they are also strangers. “Poem [You’re Henry Hudson]” is different than the other “short” poems in the collection. It’s historical and hilarious. In this poem, Yeager tells the reader, “You’re Henry Hudson; you’re Henry mother-fucking Hudson” and you’re marooned in a boat because of your arrogance. That same self-righteousness and indignation grows—as Henry Hudson’s plight gets dimmer and the situation gets more serious, the poem gets funnier. How much I needed this dark humor at the expense of a despotic anti-hero.

And then we get to the last and longest poem, “Jar of Balloons or The Uncooked Rice,” which is epic in length and scope. The entire poem is composed of questions, but it never gets monotonous. The questions bridge a range of topics, emotions, times of life, and they are rarely connected to each other, ping-ponging you from one memory or emotion to another. You never get tired of giving your own silent answers as you read, wondering how other readers (or the author) might answer differently. In this way, Yeager leads us to think about all the things we have in common (hope for balloons, nose-picking) and all our diversity (the things that scarred us in childhood, preferences about pickles). He makes us marvel at being human—but it’s simple and pleasant to do when you read this poem.

One of the nice things about this collection: anybody can read and find connection in the joy and sadness and humanity of these poems. A common criticism of poetry is that it alienates or seems inaccessible for all the “work” it takes in reading. While much of contemporary poetry is overtly political and seeks to shift perspectives, it rarely reaches a broad audience. Yeager’s poems have no political goals, but manage to be unifying and exactly what we need right now. The poems may have been written before the current political atmosphere made all of America’s fractures and prejudices obviously apparent and televised, but this collection comes just in time to save us all from loneliness.

Jaime Zuckerman teaches and writes in the Boston area where she is a current MFA candidate at Emerson College. She is the author of the chapbook Alone in this Together (Dancing Girl Press, 2016). Her poetry can be found in DecomP, Fruita Pulp, Ghost Proposal, Souvenir Lit and other journals. She is the poetry editor for Redivider, art director for Sixth Finch, and a reader for Ploughshares.