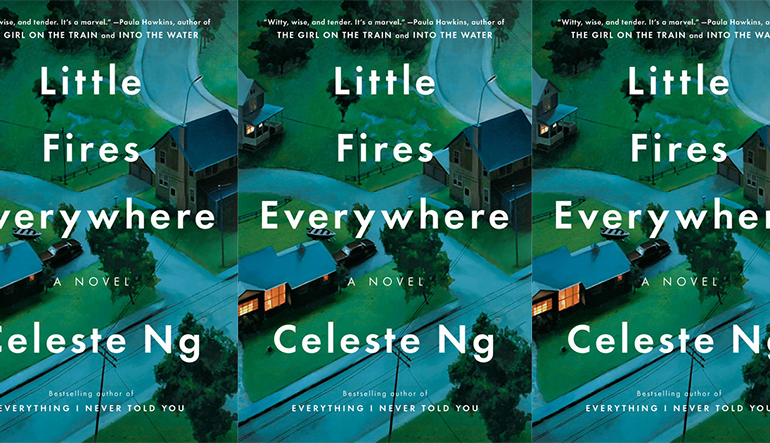 In Celeste Ng’s debut Everything I Never Told You, she explored the aftermath of a teen girl’s death and the events preceding it. Ng continues this examination of the weight of family secrets in Little Fires Everywhere. Shaker Heights, a planned community on the outskirts of Cleveland, is home to Elena Richardson, her husband, and her four high-school-aged children. The novel opens with Elena Richardson watching her home burn down, and readers backtrack the circumstances leading to an act of arson.

Months earlier, the Richardsons’ tidy world shifts when wandering photographer Mia Warren and her daughter Pearl move into their rental property. Pearl, assured for the first time that she can settle into a community, befriends the three eldest Richardson children. Lexie, the eldest, takes her under her big-sister/mean-girl wing, while the middle children, brothers Trip and Moody, catch Pearl’s attentions in competitively romantic ways.

As the lives of the Warrens and Richardsons get increasingly tangled up, an adoption custody battle divides the community. Elena Richardson’s friends, who have struggled with infertility and loss, adopt a baby left at the fire station one cold January night. The baby’s mother—a recent immigrant from Canton and a coworker of Mia’s—realizes the loss too late and struggles to gain custody of her child back. Mia and Elena quietly butt heads and Elena, a journalist on a small-town beat, uses her skills to investigate Mia’s past. Inside and outside of the courtroom, the concept of what parenthood is and is not comes into question. More than nature versus nurture, Ng explores the intersection of the public and the private aspects of parenthood and the secrets that both parents and children keep from each other.

Little Fires Everywhere unfurls like a Greek tragedy, and the omniscient narration which weaves past, present, and the all-knowing future, ensures a heavy dose of dramatic irony as the novel climaxes. Elena Richardson is an antagonist for the new age, a self-described do-gooder who views those done good deeds as favor vending machines. Elena is educated and articulate, but ultimately so sheltered in her bubble of a community she refuses to see the hard truths about her family. Like Everything I Never Told You, this novel opens on a crime scene and seeks to answer not so much “who-dunnit” but “why-dunnit.” The disruption of the almost Stepford-esque community of Shaker Heights is satisfying, compelling, and complicated.

Rachel Mans McKenny is a writer, reviewer, and adjunct professor at Iowa State University. Her writing has appeared in The Rumpus, The Knee-Jerk Review, The Chronicle of Higher Ed, and other outlets. She blogs on her website, tweets @rmmckenny, and is an obsessive Litsy user (@rachelm).