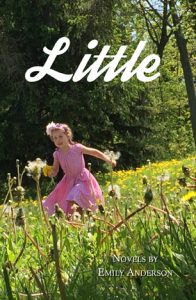 The vogue for erasure poems continues, which is good news. Done skillfully, the erasure poem encompasses what Samuel Johnson called “the two most engaging powers of an author: new things are made familiar, and familiar things are made new.” Srikanth Reddy’s Voyager discovers within Kurt Waldheim’s anodyne autobiography the confession that ought to have been there; Ronald Johnson’s RADI OS (the genre’s great progenitor) finds an eerie new visionary melody within the organ music of Paradise Lost.

Emily Anderson’s Little starts from texts that, in some quarters, are as familiar as and perhaps even more beloved than those of Joyce or Milton: Laura Ingalls Wilder’s Little House books. In our time, in the light of what the United States’ imperial westward drive meant to native peoples and to the environment, the books are vulnerable to several kinds of political critique. I can also attest, however (having discovered the books as an adult, reading the whole series aloud twice, once to each daughter), that they have a plainspoken poetry, a clarity of detail, and a psychological acuity that earn them a spot not far from Huckleberry Finn on the shelf of our compromised national classics.

Little is pitched in a near-perfect equilibrium of parody, homage, and scrutiny. Anxieties unspoken in the original become articulate; in “Long,” (from The Long Winter), the elision of the initial letter of Laura’s youngest sister Grace’s name reveals that “Ma had always been afraid that race would be lost.” Homesteading virtues such as a pioneer’s wife devotion to feeding her family, by being literalized, become luridly gothic:

At last they went into dinner. There on the table was Mother, cooked in brown gravy and crab-apple jelly.

“It takes a great deal to feed a growing boy,” Mother said. Almanzo took up his spoon and ate every bite.

Anderson turns Little House on the Prairie, the book in which the dispossession of the natives figures most painfully, into “Our Air.”  Dropping the “-dian” from “Indian” creates a disquieting fable about an interior that does not wish to be occupied: “This was in and she didn’t know why she couldn’t see in.”

Were Anderson simply taking advantage of being more sophisticated about the ironies of American history than Wilder was, however, Little would not be as remarkable as it is. Anderson calls the eight texts in her book “novels,” but she discerns the poetry in Wilder: “The empty pail, jumping with excitement,” for instance, or “My blind eyes were bluer than blue.” She does justice, too, to Wilder’s skill in depicting small town rivalries:

In the bank, Laura counted the money and bought Ma, skimpy and patched. Nellie Oleson sniffed, “Country folks!” and went away to her Kentucky palace.

As RADI OS had the power to inspire its readers to pick up Paradise Lost again with a renewed wonder, Little may well return you to Ingalls’s Great Plains, a terrible place in some ways, but richer and stranger than you remembered.