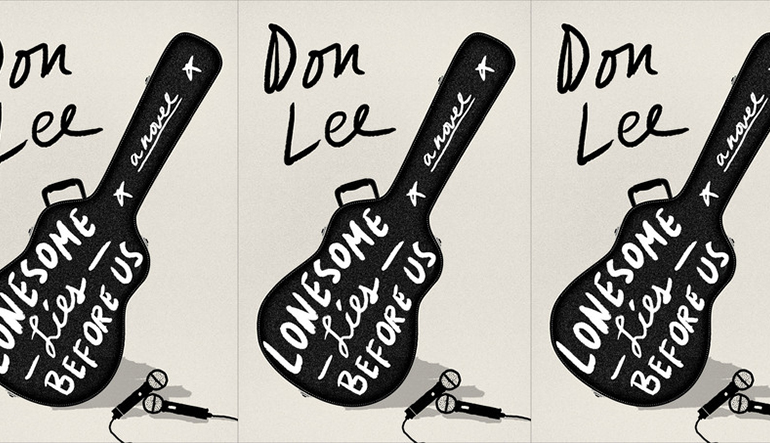 In his new novel, Lonesome Lies Before Us, Don Lee pulls off the strange feat of connecting the life of Catholic poet Gerard Manly Hopkins to washed-up, small-town California musician, Yadin Park. With clear, direct prose that offers little in the way of flashiness—one could be forgiven for mistaking the writing as simple—Lee moves us through the relationship of Yadin, who now works as a carpet-layer, and Jeanette, the daughter of his boss. Over the course of a few months, we watch as Jeanette and Yadin drift further and further apart, chase after what they believe to be second chances, crumble in the face of real happiness, and end up more miserable than when they came together. What initially reads as a somewhat mundane meditation on lower-middle class life proves to be a deceptively nuanced tale about the disconnect between our dreams and the limits of how far we’ll go to obtain them.

Somewhat reminiscent of Nick Hornby’s charming Juliet, Naked, the bulk of the novel follows Yadin as he goes on an ersatz spiritual walkabout, recording an album in secret before his Meniere’s-affected hearing disappears completely. Deciding to keep his new project a secret from Jeanette, who sees his past as a musician nothing more than the reason he ended up in massive debt, Yadin toils away on the project, almost losing his job in the process. In the spare room he converted into a studio, sitting there with his guitar and four-track, he finds a sense of the spiritual. To help further this, Lee collaborated with the musician Will Johnson on sets of lyrics that appear in the book, all of them dripping with longing, regret, and a desire for soulful reformation. One such set of lyrics begins:

Everyone’s gone now, the darkness rides
The house is empty, rooms still and wide
Gather the glasses, chairs up, move slow
Someone left a wallet, no one we know

Slightly corny as these lyrics may be, they effectively mimic the alternative country/new Americana writing that’s come to define the genre. Perhaps more importantly, they hit upon the depth of sadness-as-mundane that characterizes such writing, allowing Yadin to feel three-dimensional, soulful, and weary. They also harken to the idea that Americana is the gentile spiritual music of rural towns. Here, Lee plays with that notion by making the song ambiguous enough to suggest the song addresses Jeanette and her work at the Centurion hotel, or something more existential, more bruised.

In more overt ways, Lee attempts to follow this thread further, until he’s ultimately able to establish a connection between Yadin, Jeanette, and the writer Gerard Manly Hopkins. Initially, Lee sets up the romantic conflict between Jeanette and Yadin as a conflict of faith, with Yadin hiding his desire to explore religious options from her. He fears that her atheism and heavy involvement in their Universal Unitarian church make her likely to object to his newfound enthusiasm for praying the rosary or considering the complexity of nature on a daily basis. However, Jeanette is going through her own crisis of conscience, and struggles to understand herself as she goes through the motions with Yadin while attempting to ignite a relationship with the new pastor. Ultimately, Lee uses the church as a gateway into exploring the idea of life stations, and the ways we accept or shift direction based on what we feel is best. For both partners, this shift leads them down a path toward happiness that they ultimately reject out of fear. For Yadin, this is a recording contract and a second act as a musician. For Jeanette, this is the life her father wants for her before he passes away.

Sporadically, Lee incorporates Hopkins into the narrative. As we come to learn via the local librarian, Caroline:

“Hopkin’s best friend, Robert Bridges, thought he’d thrown his life away, becoming a Jesuit and not pursuing his poetry, not seeking an audience—or facing critics. He may have been right. Maybe Hopkins’s real sin was that he had a gift but didn’t share it with the world because he was too afraid. Or arrogant.”

While it’s ultimately unclear what overlap exists between Hopkins and the characters (outside of a vague connection between happiness and destruction), he manages to raise interesting questions about the relationship between art and self-punishment. The reasons Yadin has for ditching the PR meeting are never made clear, just as Hopkins’s decision to burn his manuscripts remains a mystery. Jeanette’s constant self-flagellation over her choice to abandon her photography is similarly confounding. In such a straightforward narrative, the decision to allow for such openness is surprising, but not ill-conceived. While the link to Hopkins may be a stretch, the vagueness of Yadin and Jeanette’s motives, be they desperate or arrogant, and the trust given to the reader to sort it out for themselves makes the plot plausible and subtly compelling.

Ultimately, the specificity of Lee’s writing goes a long way toward selling the authenticity of his characters. It isn’t enough for Yadin to play a guitar, he’s noted as playing a “2008 Martin D-21 Special,” which is noted as being of lesser quality than a “1957 D-21, which had had Brazilian rosewood on the back and sides.” Ultimately, this use of technical language gives Yadin a credibility and dimension that offsets his less seasoned approach to singing (when he watches Mallory warm up and treat her voice, he’s genuinely surprised, assuming that she just opened her mouth and projected as he does). With Jeanette, Lee specifies her belief in Alberto VO5, a hair gel, as a near cure-all for everything squeaky or mechanical. He has Anna, another housekeeper, watch in awe as she uses a tennis ball to clean scuff marks from tile. When Lee speaks to her photography ambitions, he writes that “Jeanette had opened her closet and pulled out a plastic bin, which was filled with Kodak 8″ x 10″ paper boxes.” We learn that she wanted to work for Time or Newsweek. All of this goes a long way toward carving out Jeanette as both a clever woman that’s good at her job and someone who never got over the failure of her life. While not relegated to small-town thinking or the West coast, Lee’s eye for detail breathes life into the idea of her being trapped by both her age and small-town, coastal surroundings.

While it may be yet another tale of two cis-gendered white characters uncoupling, Lee manages to raise interesting points about the nature of love at the precipice of middle age, the limits of dreams, and the desolation of small towns in the technological era. Truly this is a work of weight, and we’re lucky Lee didn’t burn the manuscript like his beloved Hopkins.