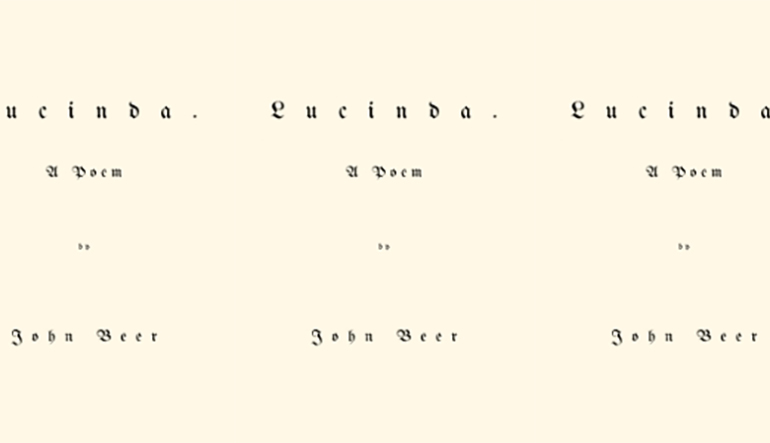 Like John Beer’s first book, The Waste Land and Other Poems, his second has a precursor text, but Friedrich Schlegel’s Lucinde is by a few orders of magnitude less widely known than Eliot’s poem. Currently out of print in the United States, it holds the status of a minor classic in Germany, and like Walter Pater’s Marius the Epicurean or William Hazlitt’s Liber Amoris, it has its devotees. The very traits that may have slowed its admission to the literary pantheon in its own day—fragmentary, disjunctive, an unstable blend of fiction and autobiography—make it feel well-suited to ours. With the appearance of Beer’s homage-imitation, perhaps Lucinde’s moment in the English-speaking world has finally arrived.

Like its precursor text, Beer’s Lucinda evokes a world of artistic experiment, heady philosophizing, galvanizing emotion, and a willingness to throw out the rulebook and live life in unprecedented ways. Schlegel’s novel breathes the air of Jena at the high tide of German Romanticism; Beer’s poem could be set in Portland, Oregon, where he resides, or perhaps Brooklyn, or Cambridge, but anyone who has spent time in the graduate student enclaves of any major university town will recognize the milieu.

Again like its precursor text, Beer’s Lucinda displays a virtuosic stylistic variety, from fixed forms to projective verse to L=A=N=G=U=A=G=E, including even a few stand-up routines. Given its assumption of the reader’s familiarity with 18th century Jena, it inevitably has a few recondite passages, but it also embraces, and to marvelous effect, the early lyrics of Jonathan Richman and the characters of Friends.

Ross, Rachel, Monica, Chandler, Phoebe, and Joey take the roles of the Jena circle in the book’s longest and most interesting section, “My Apprenticeship.” On the upper half of the verso pages, the sitcom icons discuss aesthetics, translate Goethe, and analyze themselves as both characters and performers. On the lower half of both verso and recto pages, in what Beer’s note calls a “subterranean section,” runs a hallucinatory stream of cut-up or transmogrified text: “Lead remains backhanding clot, the erect bark his by cleavage of scarlet, the pyramid measures.” (You may be tempted to skip this section. Do not.) And then, on the upper half of the recto pages, we have the story that seems the heart of the enterprise, as the relationship of Schlegel and Dorothea Mendelssohn Veit was at the heart of Lucinde:

Remarkably, Lucinda seems both composition exercise and confession (“once again the text finds itself / helplessly stuck between two distinct / critical foci, pinioned”), as unclassifiable and as exciting as the more than 200-year-old book that inspired it.