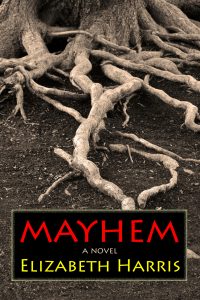 In the opening scene of this exquisite first novel by prizewinning short fiction writer Elizabeth Harris, a young farm wife in a black cloche hat and rummage sale dress climbs out of a 1920s Essex and up the steps of a Texas county courthouse that locals proudly describe as pink granite but that “is really an under-color like raw liver, flecked over with black and gray and the sparkle of mica.” Two of the three lives of Evelyn Kunkle Gant, a “modest, obedient, well regarded woman taken in adultery,” have already ended. The third has not yet begun, as—shunned by every member of the Kunkle and Gant families, neighbors for generations—she dutifully attends the 1936 trial of her husband and brother-in-law for “a crime whose mention makes men cross their legs.”

These early-disclosed plot elements give little indication of what the poetry, precision, and stunning tonal control of Harris’s prose soon convey: that the mayhem of the novel’s title is something more and something very different than the sort of violence or turbulence that the word commonly denotes. It is, rather, the informing emotional condition of this deeply rooted, deeply traditional Central Texas community at a moment of profound, yet still invisible and inarticulable, historical change—a condition manifest, most poignantly, in the intimate lives and familiar relations of the community’s most promising young couple.

“What was in that world was,” the hard-working elders taught, and warranted scant commentary. Raised by countrymen who “were kings on their own places, happy in the company only of their own dependents and often uncomfortable with men like themselves,” and by religious farm women who acknowledged the female genitalia “only in the expression, down there,“ Evelyn Kunkle and Les Gant come of age pure products of their time and place. Recounting their nuptials, Harris’s first-person narrator remarks:

“How little they know each other’s private selves, or will in the ten years of their marriage, a confident, reasonable, and widely approved union designed for devastation.”

In her girlhood, the narrator has glimpsed Evelyn’s third, post-devastation life as a member of that nameless “category of able-bodied white women who ‘lived in’ and took care of invalid old people.” That no one would tell the history or clarify the social position of such a person, she explains, gently but purposefully shattering mimesis’s metaphorical mirror, is why she has had to invent her.

Mayhem: Three Lives of a Woman is among the most vivid, textured, immersive, and compelling literary evocations of a bygone world (whose spirit nonetheless still moves, for good and ill, in our own) that I have ever encountered. It is also among the most mysterious. That’s because Harris possesses qualities found only in the finest historical novelists: the craft to render the past luminously in imagination, and the wisdom to recognize that that past can only be imagined, never known.

Evan Carton is a professor of English at the University of Texas at Austin and the author of Patriotic Treason: John Brown and the Soul of America.