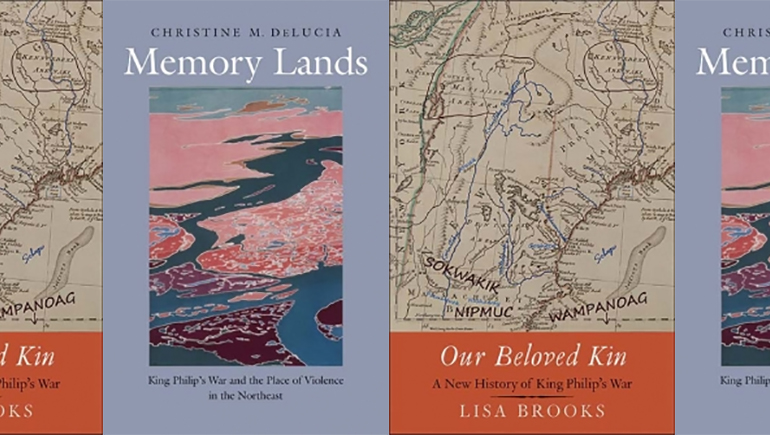 The conflict commonly known as King Philip’s War irrevocably altered both early New England landscapes and relations between Indigenous populations and British colonists. As Jill Lepore wrote in The Name of War: King Philip’s War and the Origins of American Identity, “when the English and Algonquian peoples of seventeenth-century New England went to war in 1675, they devastated one another.” King Philip’s War remains stubbornly persistent in American cultural memory, invoked by poets from Robert Lowell (“At the Indian Killer’s Grave”) to Martín Espada (“The River Will Not Testify”)—as well as by a Seekonk, Massachusetts shopping plaza named “King Philip’s Crossing” and Bristol, Rhode Island’s “King Philip Little League.” Yet despite these forms of visibility, many aspects of King Philip’s War remain obscured from our collective view, particularly with regard to historical and ongoing practices of Native survivance. Without understanding these strategies for resistance, remembrance, and regeneration, the broader account of the conflict, as well as the full extent of its devastation, can never be accurately understood.

In Memory Lands, Christine DeLucia challenges the assumption that American colonial violence can be confined to a distant chronological past and asserts that acknowledgement of such violence is indelibly linked to questions of space and place. To this end, her work is keenly attentive to the deep time and multivalent histories of New England geographies through a series of “memoryscapes”—“constellations of spots on the land,” from Deer Island to Great Swamp, “that have accrued stories over time.” DeLucia’s research is painstakingly thorough and her distillation of archival materials is accessible and entertaining. Her discussion of a Boston theatrical production titled “From Cave Life to City Life”: The Pageant of the Perfect City, performed in November 1910, opens new interpretations of census records and marriage certificates that challenge the perceived incompatibility of Indigenous persons and “modern” life. Likewise, her reading of the historical marker for the Hassanamisco Indian Reservation highlights the reductive dichotomy of “Indian” and “white” that has frequently defined cultural and political frameworks of race and culture.

Of particular interest is a chapter entitled “Algonquian Diasporas: Indigenous Bondages, Fugitive Geographies, and the Edges of Atlantic Memories,” which invokes Cherokee scholar Jace Weaver’s “Red Atlantic” in relation to the enslavement and dislocation of Native peoples to Bermuda following King Philip’s War. Closing with a provocative question that writers and scholars would be well-advised to further pursue—“What might Indigenous traces look like in diasporic contexts of island bondage, amid large colonial and African populations?”—this section of Memory Lands is the starkest reminder that King Philip’s War was both a “local” event and part of a vast early American network of colonial exchange and capitalist expansion.

Mary Rowlandson’s The Sovereignty and Goodness of God is perhaps the most well known engagement with the events of King Philip’s War. The narrative of her eleven-week captivity in early 1676 quickly became both a canonical text of American literature and a central device of Anglo-American identity formation. As Richard Slotkin and James K. Folsom have written, Rowlandson’s Narrative is

“to be taken not only as the creation of a Puritan myth, but as the starting point of a cultural myth affecting America as a whole…in which the colonial experience was symbolized by the peril of a white Christian woman in the Indian-haunted wilderness.”

In Our Beloved Kin, Lisa Brooks offers a stunning reinterpretation of this mythology, shifting two Native figures—Weetamoo, a female Wampanoag leader, and Wawaus, or James Printer, a Nipmuc scholar—from the margins of Rowlandson’s Narrative to the center of her own. At the same time, she presents new challenges to the long-held veracity of colonial accounts by Benjamin Church and Increase Mather—and offers a methodology of decolonizing history that will compel scholars and lay readers alike.

In the case of Weetamoo, whom Rowlandson refers to as her “mistress,” Brooks takes great care to emphasize her role as a savvy political figure throughout the mid-seventeenth century. Examining land claims, property deeds, and court reports, these chapters trace moments in which Weetamoo’s diplomatic interventions and negotiating prowess served to protect Native land, enforce colonial agreements, and “formally bind the Plymouth men to the words they dutifully entered into their records.” Though James Printer is featured less prominently in Rowlandson’s Narrative, he proves no less significant. It was Printer, in fact, who wrote the April 1676 letter requesting twenty pounds in exchange for Rowlandson’s “redemption,” an amount that Rowlandson herself selected. Likewise, it was Printer, in his work at Harvard Indian College and Cambridge Press, who set the type for the publication of Rowlandson’s manuscript—and the scene Brooks describes in which “perhaps he saw the reflection of himself, distorted through her eyes” is a moment deserving of great pause when we consider what, exactly, American literature is.

As in Brooks’ previous work The Common Pot, Our Beloved Kin displays significant investment in mapping Indigenous geographies onto and over colonial demarcations. Brooks notes that while “Rowlandson lacked the language to map her journey … because of her descriptions, however vague, and our knowledge of the geography of Native space, it is possible to re-map” the American Northeast in ways likely unfamiliar to most non-Native readers. As a supplement to the maps presented in the volume, there is a corresponding digital companion that enables readers to navigate additional maps and archival documents by either chapter or thematic paths. This is, quite simply, a tremendous and generous resource.

Inasmuch as the “story” of New England emerges from colonial narratives such as Rowlandson’s, we might consider that, in twenty-first century America, we continue to live in the shadows of King Philip’s War. Both DeLucia and Brooks have given us important new frameworks through which to explore the wider nature of those shadows. At the conclusion of her Narrative, Mary Rowlandson “remember[s] the time, when [she] used to sleep quietly without workings in [her] thoughts.” “But now,” she insists, “it is other ways with me.” Or, as Lisa Brooks writes near the conclusion of her narrative, “as some would say, perhaps that war has never ended at all.”