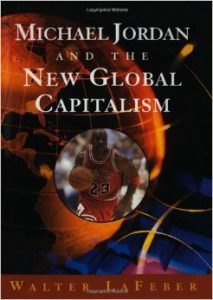 It doesn’t take very long for a revolution to seem quaint. In 1999, the year that Michael Jordan and the New Global Capitalism was published by Cornell Professor Emeritus of history Walter LaFeber, the concept of a cellular telephone was enough to count for a revolution. No wires! Conversations outside&mdash;anywhere! Woah! Fifteen years later, one is only enamored with that original, novel lure of the cell phone when willfully strolling down memory lane. Remember when we were so simple.

So it goes with Michael Jordan’s basketball career&mdash;or, to be more accurate, the societal impact of Michael Jordan’s basketball career. In the book, LaFeber bestows revolutionary language upon the types of business deals that fueled Jordan’s career. Considerable time, for instance, is spent detailing the newfangled business strategies from Nike, the shoe company that helped propel Jordan to global fame, and vice versa. Nike, an American company, produced and sold most of their shoes in other countries, which LaFeber identifies as a revolutionary new way of doing business, of the world interacting with itself.

Not that LaFeber is wrong or inaccurate to think so. Actually, LaFeber is uncannily, eerily accurate in prescribing what will happen to a world that increasingly fills up with basketball and swooshes and baggy shorts and every other type of American social export. Immediately after writing that some cultures view modern Americana as a “corrupting influence” that would even be opposed “by force,” LaFeber summons the name of Osama Bin Laden, who, at the time of publication, was most recently guilty of lethal bombings at American embassies in Kenya and Tanzania. LaFeber clearly has a refined eye for seeing how societies will react as they are transformed and rubbed up against one another, and of all possible accoutrement of the nineties, LaFeber identifies Jordan at the broiling epicenter of a brave new interconnected world.

But, just as it’s nostalgically nineties to marvel at the interconnected world just for the sake of its interconnected-ness, it’s also pretty doggone nineties to marvel at Jordan’s career just for the sake of his being an excellent basketball player. LeBron James and Kobe Bryant are the only players in the years since Jordan’s retirement who maybe possibly are in the conversation when it comes to having a superior NBA career&mdash;and plenty of knowledgeable fans won’t even engage that conversation, so awesome was Jordan’s dominance. New Global Capitalism, though, isn’t about Jordan’s playing career: it’s about Jordan the cultural phenomenon. There isn’t much phenomenon left to see anymore.

Jordan is back in his native North Carolina, where he owns the NBA’s Charlotte Hornets (née Bobcats). The team has lost more games that its won in six of the eight seasons that Jordan’s been in charge, and they’re on their way to making it seven in nine. Along the way, the team set a record for the worst winning percentage in a single season (7 wins, 59 losses)&mdash;as far as it gets from Jordan’s 1995-96 Bulls, who set the all-time-best mark (72 wins, 10 losses). Jordan has not found ways to translate his fearlessness and demands for perfection as a player into his role as a shot-caller, where he is, alas, simply average.

What’s perhaps a more poignant sign of Jordan’s drop-off is his work in commercials. LaFeber profiles how teenagers would literally kill over a pair of Air Jordan sneakers. Well, nobody’s really vying at all for Hanes shirts and underwear, which has been MJ’s most visible way of communicating with the world for some time:

MJ’s Hanes commercials&mdash;which have been going on for years&mdash;all descend down the same, dank, life-meets-art tunnel: a dopey guy obnoxiously strides up to Jordan while proclaiming the unparalleled comfort of Hanes clothes, and Jordan quietly rolls his eyes at the dopey guy’s obnoxiousness. You can imagine Jordan gritting through any number of similarly unwanted public interactions, watching apathetically as trends furiously pass him by. The revolution is over.