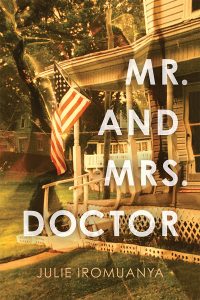 Job Ogbonnaya is a liar—or, depending on your taste, a dreamer. After his brother Samuel dies in the Biafran war, Job becomes the hope of his family. They send him to school in America to become a doctor. Job flunks out but keeps planning to go back, lying to his family and putting his father’s tuition money in savings bonds. After Job gets citizenship through a fake marriage with an American, and becomes a nursing assistant, he still tells everyone back home he is a doctor. His arranged marriage to Ifi is predicated on this fact.

After Ifi arrives to Job’s mysteriously run-down bachelor apartment in Nebraska, her husband still leaves every morning in a white labcoat (he changes into his nursing outfit in a parking lot). The lies mount and then begin to collapse. How can he speak with such certainty, Ifi wonders at one point, about what be both know to be false?

Ifi, though, maintains a vigorous fantasy world of her own. Her letters home are filled with the Good Housekeeping visions of America that she expected to have as Mrs. Doctor. Her dream of a clinic in Nigeria, with her as nurse and Job as doctor, soon becomes more real to her than the landscape of chain restaurants and strip malls outside her window. Many of the plot contrivances in the novel—and there are a few too many misunderstandings and coincidences for my taste—could be resolved by simple conversations which are often delayed for whole chapters because the characters are more present in their imaginary lives than their real ones.

All of this is narrated with wit and energy, and it is only deeper into the novel that one realizes how suffused with loneliness it all is. Some of it is the homesickness that has always been part of the immigrant experience, but part of it—and this is something I recognize from my own Indian family—is peculiar to recent arrivals.

A century ago, I think, most immigrants were forced to commit to America. Once they got a boat, they could live in a neighborhood of their own people, and try to cook their own food, but they knew their destiny was here—there were no flights to take back, and no money to go in any case.

Lately, though, there are increasing numbers of people whose relationship with America is purely temporary and transactional. They are here to make some money and then go back home. As Job’s friend, Emeka, says, Nigeria is where you must “marry, bury, and retire. America is the steppingstone.” The true lives of these characters, even when here for decades, remain in their country of origin. In the meantime, they trudge half-present through years and years; they wait, they work (constantly), and they imagine.

This constant looking forward to something-else-somewhere-else is, of course, a widespread American disease, but the Nigerian characters in Mr. and Mrs. Doctor have a particularly virulent case of it. When Cheryl, Job’s American ex-wife, asks him what he does for fun, all he can say is, “I go home.” On a literal level, he means his apartment, but his answer resonates throughout the pages of this fine first novel.