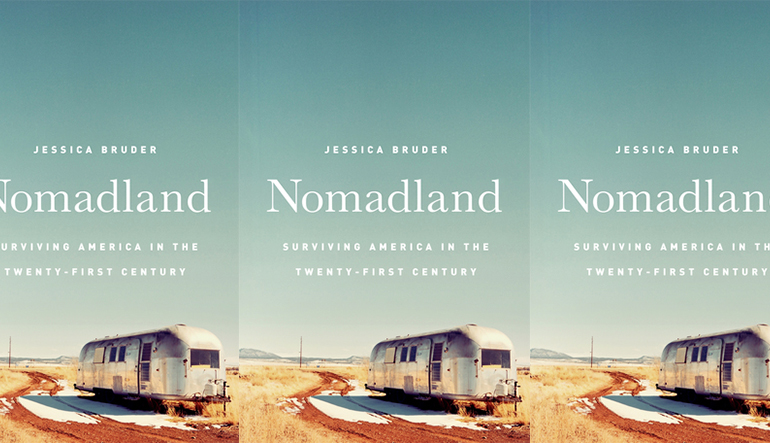 Wide open highways, the weary kitsch of desert campgrounds, unstable jobs with long hours to make ends meet, the spiritual freedom of losing bonds with material goods and fulfilling a lifetime’s worth of wanderlust—these are the ideas that fill the lives of the itinerant “vandwellers” profiled in Jessica Bruder’s Nomadland, the nonfiction account of life on the road after the Recession. Spun from “The End of Retirement: When You Can’t Afford to Stop Working,” which originally ran in Harper’s in August 2014, Nomadland delves into the lives of “downwardly mobile older Americans.” Through folk meet-ups and underground websites, Amazon seasonal packing facilities and middle American ghost towns, Bruder’s book peers into the heart of the modern American housing crisis and lifts the curtain on the forgotten multitudes hiding in plain sight.

Though Bruder dips briefly into statistics and demographics, she is quick to point out that “there’s no clear count of how many people live nomadically in America.” Due to mail forwarding services and other tricks to circumvent regulations, itinerants “blend in.” However, Bruder states “anecdotal evidence suggests the ranks of American itinerates started to boom after the housing collapse and have kept growing.”

Few #vanlife millennials appear in Bruder’s travels. The majority of the people Bruder profiles instead are of retirement age who, due to economic hardship, have not only been unable to retire, but who also cannot afford to maintain a traditional life on the grid.

Many of these Americans end up taking jobs right out of Steinbeck, like picking fruit, but Bruder uses more page space on Amazon, whose underpay and underprice strategy may have helped the country sink into such dire economic times in the first place. Amazon recruits itinerate seniors in a drive called “CamperForce.” Once hired, “workampers” drive their vans or motorhomes to their designated Amazon facility. “They love retirees because we’re dependable. We’ll show up, work hard, and are basically slave labor,” David Roderick, a seventy-seven-year-old worker is quoted.

Bruder chooses just the right detail to explain how rough working for CamperForce truly is. While many campers stocked their vans “like mobile apothecaries,” Bruder writes: “I was told that Amazon distributed free over-the-counter pain relievers at the warehouse.”

Notwithstanding, every nomad’s life isn’t filled with hardship and regret. Blogger LaVonne Ellis of The Complete Flake, one of the nomads Bruder profiles, remembers going to her first “Rubber Tramp Rendezvous,” a folk gathering of nomads that has grown in recent years as the movement has flourished. About the experience, LaVonne blogged:

I found my people: a ragtag bunch of misfits who surrounded me with love and acceptance. By misfits I don’t mean losers and dropouts. These were smart, compassionate, hardworking Americans whose scales had been lifted from their eyes. After a lifetime of chasing the American Dream, they had come to the conclusion that it was all nothing but a big con.

While a hardship for some, Bruder makes it clear that life on the road is the endgame for others. Bob Wells, the creator of CheapRVLiving.com and the Rubber Tramp Rendezvous, and a recurring character throughout the story, believes that the nomadic lifestyle “could go far beyond meeting basic needs, becoming a portal to loftier aspirations: freedom, self actualization, and adventure.”

Wells suggests that “vandwellers are conscientious objectors from a broken, corrupting social order.” Even though a homeless person may live the same way, “A homeless person…has one goal and that is to get back under the tyranny of those rules, where he feels comfortable and safe.”

In that, Bruder comes to this conclusion: it isn’t the lifestyle that matters, it’s “the idea of choosing one’s destiny.”

Rebecca Renner is a writer and editor living in Boynton Beach, FL. Her work has appeared recently in New York Magazine, the Washington Post, and Electric Literature. She is working on a novel.

Tags:Jessica Bruder, Nomadland, The End of Retirement: When You Can’t Afford to Stop Working, W.W. Norton