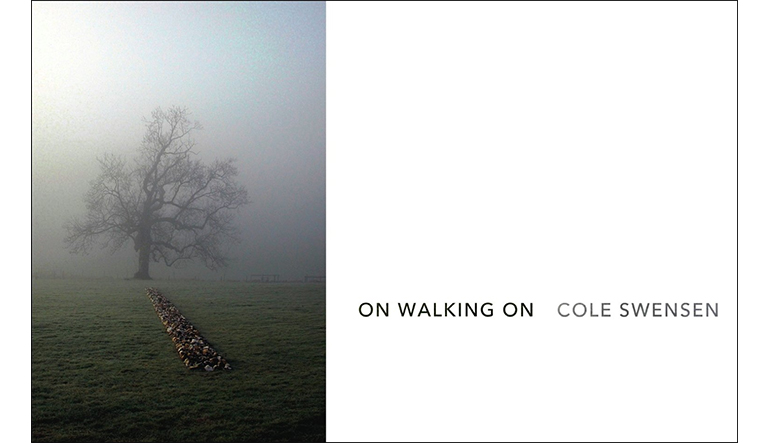 Imagine an anthology of the literature of walking, with examples ranging from the Middle Ages to the present. Further imagine that the selections have been provided with commentary, supplying biographical and historical context as well as some perceptive analysis. Now imagine that that these commentaries are poems, usually in long lines, lyrical and prismatic. Finally, imagine a book containing only the commentaries, without the accompaniment of the texts that inspired them, supplemented instead with the commentator’s prose poems on walks she herself had taken one summer. On Walking On is like that.

The imaginary anthology that Swensen’s book conjures up would be a brilliant and varied one, with some obvious choices (William Wordsworth, Robert Louis Stevenson), some surprising ones (Gerard de Nerval, Alexander von Humboldt), and some fresh contemporary ones (Will Self, Harryette Mullen). Seven walkers get particular attention in the volume’s longest (and strongest) poems: Jean-Jacques Rousseau, Henry David Thoreau, George Sand, Virginia Woolf, Robert Walser, W. G. Sebald, and Lisa Robertson.

Sand is likely the least appreciated of the seven today; Swensen’s poem on Promenades autour d’un village not only evokes that book’s setting but also offers its apologia: “She was criticized at the time / / for romanticizing country life, a change she addressed calmly and directly: you do / not know them, and so actually, though admittedly somewhat essentialist, I don’t, // she said, find my prejudices any more or less accurate than your own.”  Swensen’s Walser may be the most visionary of the seven: “the trees that frame the door of the inn glide forward almost / imperceptibly or seem to, to lean into, and we hold onto the image, saying yes // we have seen this, and left nothing behind.”

Walking is among the most basic of human activities—even in our earliest memories, we already know how to do it—and presumably it has changed little, as an activity, from Chaucer’s pilgrimage to Guy Debord’s dérive. Existing alongside this continuity, though, is immense change. The country walks of Thoreau and Sand become the urban ones of Woolf and Robertson; history obtrudes with Sebald. In this respect, On Walking On interacts dynamically with Swensen’s other recent work contemplating those uncanny fraternal twins, motion and stasis. Gave (2017) is devoted to a French river, the Gave de Pau, which like other rivers is always in the same place while also rushing onward, while the cities on its banks are stationary but, over time, dramatically changing. Landscapes on a Train (2015), as one might guess from its title, contemplates both the apparently motionless that is moving and the apparently moving that is still.

Were one asked to list philosophical poets, Swensen’s name might not come immediately to mind, but her investigations into the phenomenology of perception have that same power good philosophy does: she turns the reader’s assumptions inside out, as gently as she can, and shows them the sun.

Tags:books you might have missed, Cole Swensen, Nightboat Books, On Walking On, Poetry Collections, walking