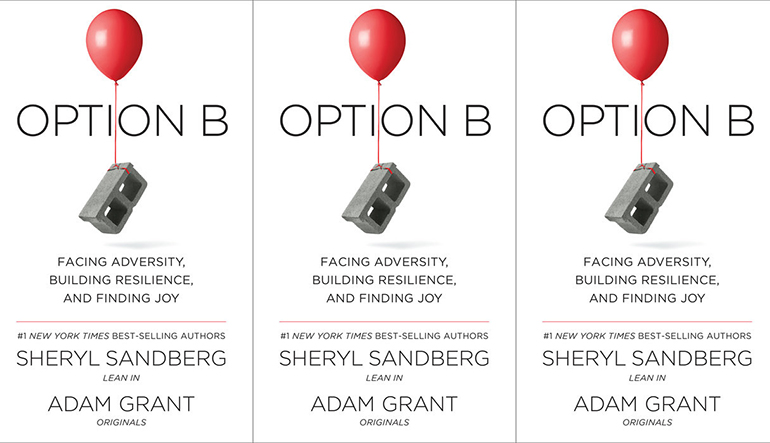 In 2013, Facebook executive Sheryl Sandberg released Lean In: Women, Work, and the Will to Lead. The book was a commercial juggernaut, selling a million copies less than a year after publication, and the title became a ubiquitous slogan. More importantly, Lean In brought attention to the myriad of obstacles facing women in a grim modern-day workplace. In Option B: Facing Adversity, Building Resilience, and Finding Joy, Sandberg sheds light on another subject many people don’t like talking about: death.

Two years after Lean In was published, Sandberg’s forty-seven-year-old husband, David Goldberg, died of a heart attack. Sandberg’s brutally honest narrative chronicles the shock, doubt, and horror her family experienced immediately following the loss. Two weeks after losing her husband, Sandberg was preparing for a father-child activity. “I want Dave,” she cried. Her friend threw his arms around her and replied, “Option A is not available, so let’s just kick the shit out of Option B.” Indeed, the theme of moving on—but not necessarily past—tragedy is her central message here.

Sandberg is counseled by a rabbi who recites a one-line prayer to her, “let me not die while I am still alive.” Throughout Option B, she illustrates what this means to her and others who face traumas, tragedies, and terror. She finds redemption in the kindness of friends, the honesty of colleagues and the steady reminder of hope symbolized by her two children. Her friend Adam Grant, a psychologist at Wharton and author of Originals: How Non-Conformists Move the World, asserts that resiliency can be developed, but it’s not easy. While it’s cultivated by honesty and compassion, it’s also discouraged through isolation and guilt.

One criticism of Lean In was that a woman with a net worth of over one billion dollars can lean wherever she wants, and it was laughably naïve for Sandberg to advise the average, harried, middle-class working woman to do the same. That might be true, but it’s clear Sandberg wrote Option B not to expound a go-getter approach to life after a traumatic event, but to explain how a seismic loss can be an opportunity to assess what really matters. Sandberg reconciles the impermanence of our world with an enduring love for her late husband, but she doesn’t do it alone. While she has a level of affluence granting access to housekeepers and staff at her house, wealth cannot bring him back. From when she first hears the news of her husband’s passing, while she sits shiva, and throughout writing Option B, she recognizes the rare potency of kindness, the value of friendships and the danger of blaming herself. Her account is rare amongst the dread often associated with PTSD, an example of how action can speak louder than words, and a testament to a resourceful, resilient, and ambitious woman.

Aaron Sommers is a writer living in New Hampshire. His fiction has appeared in The Berkeley Fiction Review and The Olive Tree Review, among others. There’s more about him atwww.aaronsommers.com. He can be followed @aaronsommers.