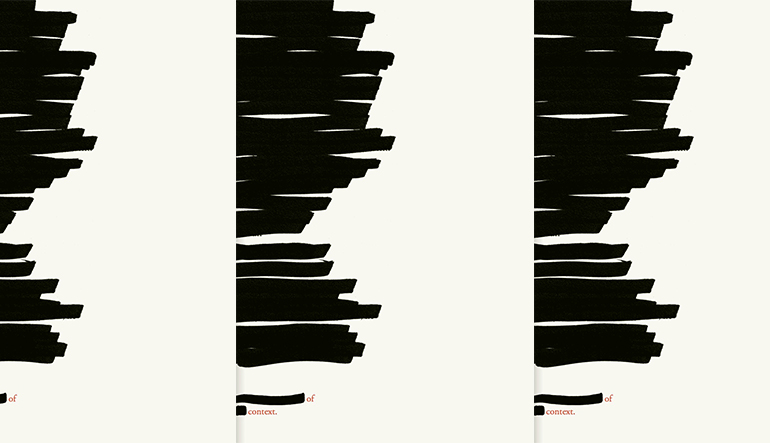 When asked about his place in the imaginative landscapes of fiction, Vladimir Nabokov observed that an author’s “absence from a literary work can become a kind of radiant presence.” We sense the author’s presence, their careful and deliberate hand, most in what is hidden from us, and the gradual realization of a landscape beyond what is on the page, the suggestion of all that we cannot yet see. What is left unsaid in a poem or a story, those silences and elisions, reveal more about artistic intention than the text proper, with its rhetorical flourishes and graceful narrative arc.

John Gosslee’s recent erasure project, Out of Context, enacts, interrogates, and dramatizes this notion of silence as artistic vision, as narrative and its inevitable unraveling. Presented in a series of “blackouts,” which redact the work of numerous contemporary poets, Out of Context reads as an innovative and highly visual ars poetica. Throughout the work, Gosslee reinstates silence and rupture in the contemporary literary landscape, a corrective gesture that disrupts the clear narratives presented in so much of contemporary autobiographical lyric poetry. What’s more, Gosslee reminds us of the intricate relationship between the senses, especially when considering the existence of a literary work on the page. Throughout Out of Context, Gosslee reminds us that silence can be both visual and visceral, an experience that is not as simple as re-envisioning a poem or story without.

In many ways, Gosslee’s work arises out of a rich and burgeoning landscape of contemporary erasure poetry. Resembling the procedural erasures of Yedda Morrison in Darkness, in which she erased people from Joseph Conrad’s Heart of Darkness, creating an ecopoetics, Gosslee too envisions erasure as a means of transformation. And, much like Mary Ruefle’s A Little White Shadow, in which redaction, and its subsequence disruption of narrative, becomes a means to excavate only the most luminous language, those bright and singing fragments, from the original text, Gosslee too envisions the act of reducing another’s work as a process of curation and making visible, revealing what has been hidden in so much narrative. In the tradition of both Morrison and Ruefle, Gosslee posits erasure poetry as a way of reminding us of the materiality of the medium, calling our attention to the book as a material object.

Yet at the same time, Goslee calls our attention to the violence of erasure, and of the experiment more generally. For Gosslee, this is a productive violence, a destruction—of tradition, of constraint, of readerly expectation and its inherent limitations—that gives rise to new and transformative possibilities. In other words, tradition is dismantled and born anew, in the Hegelian sense, retaining only those qualities—beauty, lyricism, and suggestiveness—that are conducive to artistic innovation.

With that in mind, Gosslee’s “Untitled” embodies these ideas about tradition and the violence of the experiment. He writes,

in gift shops. The death

Opens me up.    the weather

Here Gosslee deconstructs his own creative process, highlighting the possibilities of dismantling tradition (“The death / Opens me up…” ) and the challenges of doing so, as he inevitably bears this tradition into the new artistic landscape he is creating (an idea that is most visible in his description of his “eye” as “lines extending” indefinitely). In this respect, Gosslee’s use of found language, his pillaging of other poet’s work, offers a meaningful reflection on our artistic inheritance. We are constantly borrowing from a shared artistic repertoire, whether we realize or not; we do not speak, but other voices inevitably speak through us.

In this sense, Gosslee’s meditation on silence, his efforts to rupture and fragment the work that circulates around him, may be interpreted as the ultimate resistance to convention, its omnipresence and inexorability. For Gosslee, if it is not possible to speak authentically, silence becomes a powerful rebellion, an implicit critique and implied manifesto. Out of Context is perhaps most subversive in this respect, as silence is revealed as inherently political, an act of ontological violence and disruption. As Gosslee himself writes, “The end. / The book out the window…” Indeed, what is left intact guides the reader as to how to interpret the aftermath of redaction, its gaps and fissures.

What’s more, by carving a space for silence in the work of his poetic predecessors, Gosslee at the same time carves a space for the other, room for those outside the cannon to speak. It is in this way that erasure becomes an egalitarian gesture, a collaboration that extends far beyond Gosslee and the poets with whom he’s chosen to engage. With that in mind, Out of Context is Baudelaire for the contemporary reader, it is Pound’s Cantos for the post-conceptual practitioner. This is an exciting and necessary addition to recent offerings in experimental writing.

Kristina Marie Darling is the author of twenty-seven books of poetry, most recently Ghost / Landscape (with John Gallaher; BlazeVox Books, 2016) and the forthcoming Dark Horse (C&R Press, 2017). Her awards include three residencies at Yaddo, where she has held the Martha Walsh Pulver Residency for a Poet, as well as a Hawthornden Castle Fellowship, a Fundacion Valparaiso Fellowship, and three residencies at the American Academy in Rome.  She is the recipient of grants from the Whiting Foundation and Harvard University’s Kittredge Fund. Her poems appear in New American Writing, The Harvard Review, The Mid-American Review, Poetry International, Passages North, Nimrod, and many other magazines. She has published essays in Agni, The Gettysburg Review, The Los Angeles Review of Books, The Iowa Review, The Literary Review, The Kenyon Review, and elsewhere. She is Editor-in-Chief of Tupelo Quarterly, Associate Editor-in-Chief at Tupelo Press, and a contributing writer at Publishers Weekly.

Tags:books you might have missed, John Gosslee, Out of Context, Press Otherwise