Home
»
Book Reviews
»
Review: Out of My League by George Plimpton 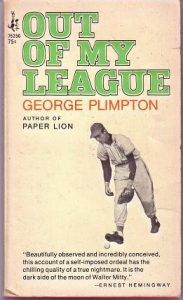 Out of My League: The Classic Hilarious Account of an Amateur’s Ordeal in Professional Baseball

There is, surrounding George Plimpton, the same world-traveled air that surrounds the fictional beer-selling sliver of a character The Most Interesting Man in the World (TMIMITW). TMIMITW gains his fictional interesting-ness via the sheer imposing number of his travels, an original far-flung montage of adventure and sport to accompany each new commercial in an apparently eternal series. Plimpton’s interesting-ness is a bit more interesting because, well, he actually did all of the journeys that would be recounted with a laugh over a beer. The trade-off for adventuring fictitiously versus actually: while TMIMITW commands each day with magnetic suaveness, Plimpton’s most interesting moments were a carnival of mishaps, his own shoes endlessly tripped over. Which probably makes for more interesting reading anyway.

Plimpton’s personal journey into “participatory journalism” began with him sitting in Yankee Stadium, watching a ballgame and basically wondering what it would take to get on the field with real-live Major Leaguers. It feels like an impossible ask here in 2015: inevitably a small army P.R. staff would materialize from thin air to prevent today’s journalist from playing the game in front of actual paying spectators. In the late fifties, though, one could, as Plimpton did, talk to a man named Toots Shor in a New York City bar, and Toots would be able to convince a magazine editor that it would be a good idea to have Plimpton pitch before a November exhibition of All-Stars. With the apparently enticing sum of $1,000 on the line, the American League and National League would attempt to hit Plimpton’s pitches for the most hits, with the winning side splitting all that loot amongst the whole team. The afternoon unwinds in so many disastrous directions that Plimpton is easily able to fill a whole book, Out of My League, with the experience.

One of my favorite things about sports are the moments when professional athletes’ prowess is matched up against one of us pretty-much-normal civilians. Because it looks like professional athletes—more or less often depending on the success of your favorite team—can end up making a bunch of mistakes out there. But don’t those mistakes only look so egregious because the field is stuffed full of other professional athletes? These are the athletes who excelled at the top percentile of every competition put before them—until they finally reached the pros, accessible only by other top-percentile-ers. Over so many years of competition, I’m convinced the gap between them and us is much much larger than we might think it is.

Out of My League, gloriously, will never answer any of these questions. While Plimpton was a pitcher in school, his preparations for this assignment had to include purchasing a baseball glove—which he then lost. A very crucial component to Plimpton’s pitching competition went unrealized until the event was underway: without an umpire, there was no count for balls and strikes. With no count for balls and strikes, the hitters at the plate could wait for as many of Plimpton’s throws as they pleased before choosing to swing at one that they liked—a tally that reaches up to 24 pitches for a single batter.

And still Plimpton manages to retire some batters, All-Stars. Another of his pitches lands in the upper deck, yes, but so what. Fortunately, Plimpton didn’t dream up this idea because he direly wanted to puff out his chest and boast about the most macho of personal accomplishments. He just kinda wanted to see what would happen. It’s an adventure, for pure adventure’s sake.