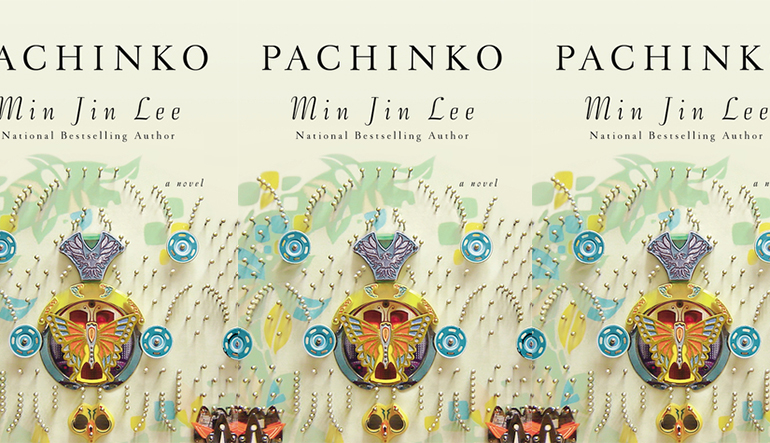 Min Jin Lee’s sophomore novel Pachinko spans eight decades and four generations of a Korean family that emigrates to Japan during the era of Imperial Rule and struggles to make a home there as they weather the Great Depression, World War II and the Cold War proxy war that eventually divides their motherland. Sunja is the hardworking teenage daughter of boardinghouse managers who live on a small island town outside of Busan. An older businessman seduces her, and only after becoming pregnant does Sunja discover that he has a wife and three daughters in Japan. One of the boarders, a minister recovering from tuberculosis, offers to marry Sunja and raise the child as his own. They move to Osaka, and though they never return to Korea, as their lives adjust to the profound challenges of war and want, the question of home is rarely forgotten.

The book’s title comes from a game that’s been popular in Japan since the 1940s and that shares some similarities with both pinball and slot machines in the United States. Though gambling is illegal in Japan, pachinko is an exception and pachinko parlors abound throughout the country. It’s an industry worth billions of dollars, and not without its own complex political history and metaphorical meaning, which Lee mines expertly.

Lee’s lauded debut novel Free Food for Millionaires was published in 2007 and dealt with a Korean American family living in Queens in the 1990s. If her first novel is an excellent iteration of the Korean immigrant story in America, then Pachinko is the seminal English literary work of the Korean immigrant story in Japan. Sunja’s eldest son Noa develops a love for English literature, and Pachinko has the sweep of some of Noa’s favorite authors’ work, including Dickens. From the first of its nearly 500 pages, the novel moves swiftly. Somehow an epic about familial duty and honor in the face of unending daily indignities is nothing short of a page-turner, and the reader is propelled forward as the novel’s characters are swept through twentieth century history.

Lee’s sentences and the novel’s plotting feel seamless, so much so, that one wonders why we make such a fuss about writing at all. Her style is literary without calling attention to its lyricism. The story isn’t in the language, and yet language is vital to the story, particularly, in whether characters speak Korean, Japanese, and later, English, and in what they can and cannot bring themselves to say to one another and admit to themselves. The omniscient narrative follows several central characters intimately, women and men, Korean and Japanese, younger and older, all grappling with the tensions between their desires and what the world demands of them.

Pachinko is as much a story about money and prejudice as it about colonialism, war and globalization. Lee explores how politics effect the family unit, but more profoundly and perhaps perniciously, individuals’ sense of identity and self-worth that underpin their decisions. The novel is a poignant reminder to any American alarmed by the new administration that we are not the first and will not be the last to experience an existential alienation at the hands of our government and world affairs so beyond our control and inescapable, the mind reels at the scale of power and speed of change.

“Adapt. Wasn’t it as simple as that?” Sunja’s brother-in-law asks himself. “For every patriot fighting for a free Korea, or for any unlucky Korean bastard fighting on behalf of Japan, there were ten thousand compatriots on the ground and elsewhere who were just trying to eat. In the end, your belly was your emperor.”

Falling into and then embracing the pachinko business eventually allows the family to not only satisfy their bellies, finally, but moreover, build considerable wealth. It also ensures that they will never be able to overcome Japan’s entrenched stereotypes about Koreans, no matter how unjust. The tone of the final third of the book shifts as life changes for the family: they leave behind questions of survival to grapple with those of success in a country that does not recognize them as full citizens even though they have lived in Japan for generations.

“A woman’s lot is suffering,” serves as a refrain throughout the book, and yet Sunja, the steadfast daughter, mother, wife, sister-in-law, grandmother and entrepreneur at the heart of the story, imbues the novel with strength, grace and maybe even a cautious sense of hope that the joys and sorrows of life are worthy of our enduring. Lee first had the idea for the novel in 1989 when the story ends. The nearly thirty years of Pachinko’s gestation was well worth the wait.

Leena Soman lives in New York and is completing her MFA in fiction at Bennington College.