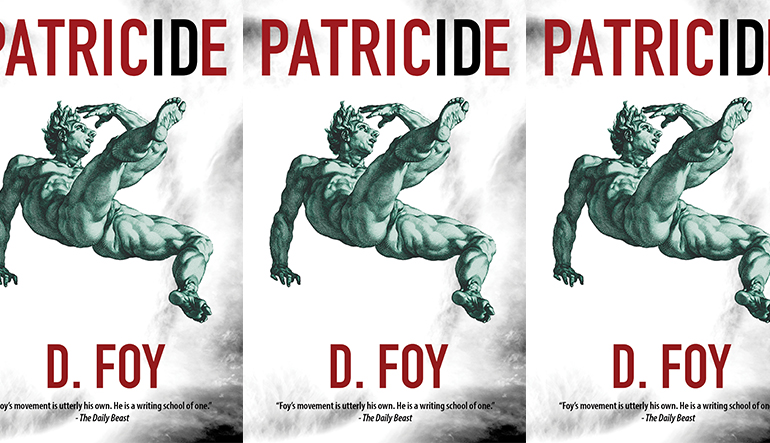 On the last day of seventh grade, all the girls passed their yearbooks around to have them signed by their friends, and mine came back with several pages defaced—big angry Xs, “FAT” scrawled across a couple of them—and as I looked through the book, my face burned with hot indignation and fresh pain. Who would do such a thing? And why? WHY?

I bring this up not because it still bothers me, but that reading Patricide I think I finally understand that impulse to secretly undermine someone else, to throw mud on someone else’s good fortune. The protagonist in D Foy’s second novel is that angry young kid whose pain and shame he cannot express except in strange orthogonal ways, ways that will only deepen his pain and shame, not alleviate them. But Foy allows us inside that boy’s beleaguered brain box and we feel every horrible sensation he is prone to, from the burning of his leg muscles as he pumps his bike up the hill to the house he doesn’t want to go home to, to the first hot parching intake of cigarette smoke into his baby pink lungs.

The boy remembers events clearly, but his reality is denied, time after time: “Did none of what you remember happen? Do things not happen that are said didn’t happen? If no one speaks of this or that, had this or that ever been to speak of?” Later this consistent denial of his experiences begins to have serious repercussions:

No matter how sure he was he knew what he knew, somehow, far in the core of his knowing, a spot of doubt had appeared, which for all his efforts he couldn’t kill. He scourged it with his mind, he smashed and clawed and tore it with his mind, but instead of weakening or shrinking, the spot of doubt leapt from one piece to the next, like a germ in the heart of the city. Before long he no longer had a voice in his head, his own voice, but three and five, then seven and nine or more, none of them his, most of them yelling at once, so much so often they kept him from anything else.

Patricide is a masterpiece of explanation while at the same time a gripping story of a family plagued by abuse and unable to stop the cycle of that abuse. Kakfa’s “Letter to His Father” kept rising to my mind as I read Foy’s blow-by-blow account of the protagonist receiving not only the wrong present for Christmas, but the exact same present as his two younger brothers. The indignity of having his parents not only not listen to him, ignore him in all ways and not know who he is at all, becomes even more excruciating when he realizes they don’t really care who he is. And yet he’s supposed to be grateful for their bad present and perform his love for them. It’s excruciating but also enlightening.

In stand-alone chapters titled from stereotypes (“The Coward”, “The Exile”) Foy creates a subtle nuanced portrait of the boy and his father. What seems rough and pixilated at the beginning of the story becomes sharpened and finely, tightly drawn by the end of the book. I was reminded of Albrecht Dürer’s drawing of a rabbit, each hair attentively picked out in black ink.

In Patricide, Foy speaks beautifully, in hauntingly poetic prose—repetition-rich, yet always reaching deeper—of the difficulty humans have in trying to love others, even love life, when they have had no experience of being loved. Our protagonist, somehow, after a litany of failures to love, does come through the experience. His story is so wrenching, but ultimately not depressing, because of his commitment to understanding himself. And we the readers gain from this long and fruitful struggle.

Originally from Minnesota, Julie Hart has lived in London, Zurich and Tokyo and now in Brooklyn Heights. Her work can be found in PANK Magazine, The Rumpus, Vol. 1 Brooklyn, Blue Lyra Review and at juliehartwrites.com.