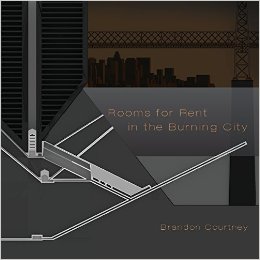 In the days before Spotify and iTunes, rock bands faced a challenge known as the “sophomore album slump.” A new band typically had had a few years to compose and then hone in performance the songs that made up its first album; if the album did well enough to produce demand for a second, however, the band not only had a much briefer span in which to develop material, but also faced the puzzle of whether to stick to the style that had proven successful or change it up, so as to show ability to grow as artists—a puzzle many groups failed to solve.

Brandon Courtney’s second collection, Rooms for Rent in the Burning City, follows his first, The Grief Muscles, by only a year, and it passes the sophomore slump test. The strengths of his first book are still in evidence, but his work also shows signs of developing.

Having grown up in a small Iowa farming community during the meth plague and served in the Navy during Operation Enduring Freedom, Courtney can draw on a different range of experiences than most American poets. A lot of that experience is traumatic—the drowning of Courtney’s friend and comrade Benjamin Johnson haunts both volumes—but he can present it exactly, without sensationalizing:

Of the Navban Dovom’s Kalashnikov, I remember
the slight bank of the banana clip, the polished
butt of the weapon pressed hard against the clavicle, & the scar
he showed me, pulling the collar off his shoulder, a pink
night crawler stretched across travertine.

That last image points to another of Courtney’s strengths, a lyrical sensory fullness that informs even his accounts of trauma, like the traces of Keats one can hear in Wilfred Owen:

Throw into the ocean everything you wish to forget:
black rifles, your fingers turned to sand
inside another’s body;
the blood knot of your father’s heart,
finally untied.

Finally, there is Courtney’s ability to sustain a longer poem, such as “Improvised Devices” in The Grief Muscles and “The Roman Room” in Rooms for Rent. As good as Courtney can be with a quick, startling image, he is even better with cumulative effects. “The Roman Room” in particular, which uses the “memory palace” as organizing principle, shows what Courtney can do when he lets himself range a bit.

Crucially, Courtney is willing to try new things and not simply rely on his strengths. “Memorandum for the Record: Evidence Property Custody Receipt” (included in Rooms for Rent, it is a very early poem that appeared in the 2009 Best New Poets) borrows the form of a bureaucratic document; “The Physics of War” (not in either volume, it appeared in the November 2015 issue of The Progressive) appropriates the language of textbooks. Neither poem much resembles the general run of his work, but both are unforgettable. He is worth keeping an eye on.