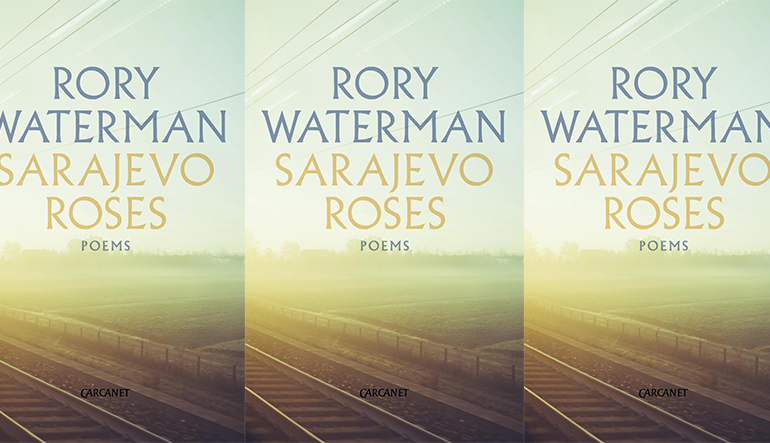 Rory Waterman’s work is wonderfully intelligible; by that I do not mean facile or prosaic, but that his vision is clear, his language scrupulously chosen, his quest for meaning apparent and authentic. Sarajevo Roses is a volume packed with journeys, but this is a poet who attends to the enduring as well as the transient, he constructs  gritty, unsentimental pastorals in the noble peasant tradition of Clare, Hardy, Edward Thomas and Robert Frost. The natural world is experienced as an aspect of the spirit, rather than background scenery or sight and sound effects. Consider “Anderby Creek,” a touching lyric for a poet friend:

…  The stars are sharp.
The place won’t care if you come back. Come back.
Watch patternless algae thrash against that dark,
Creating what a flailing thought makes there
Like your father lowering swiftly through the bedrock.

The tone and tact are perfectly judged, the “flailing thought” a vividly raw moment.

The elegiac features in many poems, sometimes to measure the distances between people, especially loved ones, at others to crystallize pleasure or delight. In “Sots Hole,” Waterman explores a childhood hidey hole, which later became a place for another kind of intimacy:

The latch would open to a world still simplified,
Where willows comb water and unseen Mallards meander.
And she pulls him close—all he once thought he wanted.

There is nothing bathetic or embittered about that last perspective, it simply plays its part in the real sadness of things. However, the poems are not without a balanced acerbity, often at the poet’s expense as he makes an uncertain way through the world. In “St. Peter’s Basilica,” after observing “selfie sticks dance before us at the altar,” a couple fail to connect, both in faith and aesthetics:

We choose to do this together, but you see lustres

I can’t. Which is fine. Till the end. For good or ill,
my offerta slips through the slot then clatters at clutter.
It’s hardly enough yet too much. Like this gold.
Let that be.

Disjointed, all but unfinished, this poem draws on the edginess of Larkin, without ever assuming his bleak, mandarin tone.

The variety of style and subject matter makes this a volume to delve into over time; it tends towards meditation rather than excitement, perhaps, but it is very rarely without substance or craft. A poem or two may depend too strongly on an evocation to speak for itself and I am not hugely amused by the final piece, “Tuesday,” a rather lukewarm satirical gloss on the small miseries of a University Lecturer and an even sketchier snipe at the dubious finances of a not-so-Higher Education scheme:

each represents forty grand
to the bastards who set Pintle’s pay.

It’s vital that artists attend to the world of work, but difficult to care about someone whose biggest problem is too much luck and comfort, as Frost put it. Why doesn’t this Pintle chap get a job less damaging than being a jaded, cynical teacher?

Just to dispel any misgiving that this slight piece is a fair insight into  the whole collection, I’d like to consider closely a two stanza tour de force, “Love in a Life.” This, of course, is the title of a most poignant lyric by Browning and Waterman’s poem deserves every ounce of allusive weight. It is a brief, all but speechless drama in a railway carriage:

The old suit reading the Telegraph at his wife
In the Quiet Coach of our train to Paddington
Uncrosses his legs, cracks me with a toe,
Raises the ‘Sorry’ hand and carries on
Steadily, as before…

It’s so exactly observed: The Telegraph, it had to be; read “at,” not “to” his wife. The harsh cracks of his toe combined with the terse courtesy, such an English non-dialogue about nothing at all and yet so much about common civility and tolerance. It’s as clear as daylight that Waterman will read The Guardian, for example! Then, as we all knew they would, the two part from the one:

She leads him down the aisle and out of my life:

he hulks an alloy trolley-case from the rack
then holds her pallid hand.

“Down the aisle,” recalling that portentous moment so many years ago and with no less significance now. The structure is even tighter than Browning’s and the emotional charge as persuasive, despite being an act of observation rather than a cry for connection. This seems to me a work of  maturity far more fully achieved than is common for a man of 37. The collection shows the scars of a number of relationships, none of them treated with insouciance or lack of empathy.

The world is a slightly better place for the existence of this book. I do not write that lightly.