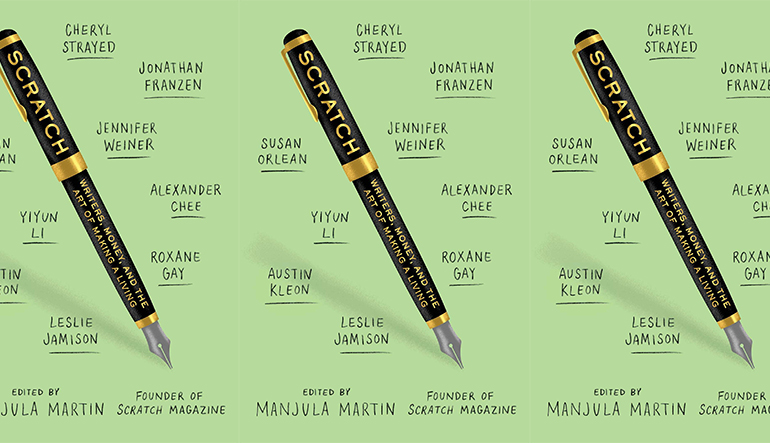 Manjula Martin, founder of Scratch Magazine and editor of the book Scratch: Writers, Money and the Art of Making a Living, believes that literature and commerce have always been and always will be “uneasy bedfellows—an odd couple.” In her introduction to Scratch Martin asserts, “Working writers are in a constant state of negotiation: work and life, art and commerce, writing and publishing.”

Scratch, a collection of interviews and essays from writers spanning the gamut of genre, commercial success, race, gender, and class, boasts pieces from Alexander Chee, Roxane Gay, Yiyun Li, Porochista Khakpour, and Jonathan Franzen. Topics range from the gritty details of checks and debts to a philosophical pondering of money, art, livelihood, and lifestyle.

“True or False,” Martin asks the reader in the introduction, “Writers should be paid for everything they write. Writers should … count themselves lucky to be published. You should never quit your day job. You’ll know you’re successful when you can quit your day job. Writing is an art, not a business. Writers should be entrepreneurs.” All of the writers in this book concede that, for working writers, art and commerce are not separate, but each writer has to sleuth out these answers for herself, and Scratch offers a place to explore these tensions and tease out an understanding of the contradictory, codependent relationship between writing and commerce.

In her essay “Against ‘Vs.’,” Leslie Jamison agrees that, “Whether we like it or not, money’s presence in art doesn’t depend on whether we consider its presence.” She asks, “What if we stopped thinking of money as the dirty secret of creative pursuit and instead recognized money as one of its constituent threads?” Jamison considers it tactless for writers to discuss their financial lives, and she doesn’t dismantle this taboo by sharing the details of her own. Instead she muses, “How does funding affect the work we make?” and “we are not simply producers but produced.”

Scratch includes many reflections from women and writers of color, exploring how marginalized voices write and sell work, often for a straight, white, audience. One of these is Kiese Laymon’s essay, “You are the Second Person,” which details exchanges with his editor who made racist editorial feedback, such as, “black men don’t read,” and advises Laymon to target “bougie black women.” Laymon reports that on the day his novel comes out, he’s wearing an XXL T-shirt that says on the front, “WHAT’S A REAL BLACK WRITER?” and on the back “FUCK YOU. PAY ME.”

Daniel José Older powerfully chronicles the micro- and mega-aggressions of a whitewashing publishing industry in his essay, “Diversity is Not Enough: Race, Power, Publishing.” Older recounts being told by white editors that he’s getting his own culture wrong, that white people don’t give men of color hostile glances anymore, and that the reason people of color are under-represented by white literary agents is because people of color don’t submit their work as often. Older writes, “This is the language of privilege – the audacity of standing at the top of a mountain you made on the backs of others and then yelling at people for being on the bottom.”

It’s hard to read this book and not think of Lewis Hyde’s classic, The Gift, which explores art and commerce on a spiritual level. His writing goes deeper than the essays here—after all his is a book and Scratch is a collection of short pieces—as he envisions a gift economy for artists. “A commodity has value while a gift has worth,” he distinguishes, while acknowledging that the artist must meet the financial demands of her life while simultaneously protecting her art from it.

In his essay, “Write to Suffer, Publish to Starve,” J. Robert Lennon echoes, in new language, many of Hyde’s ideals:

“We create our art without regard for its extrinsic value, deep inside our Batcave of rectitude; and only once the work has met our approval as a fully realized expression of our aesthetic ideas do we issue it into the world in the hope…that someone might be willing to pay us for it.”

It’s important to note that both Hyde and Lennon, who hold such pure notions of art and the gift economy, are white men with institutional backing and financial support.

As a nonfiction writer who primarily writes and sells personal essays, I appreciate Scratch’s aim to untangle the mostly ignored knot of creativity, market, and money. I didn’t start writing for money. I started writing because it was how I talked to myself, understood my life and the world, and later, how I communicated with others. But when I started making money, I had to grapple with what it meant to commodify my thoughts and experiences. A horrible case of poison oak had value if it made a good essay, a devastating breakup could be turned into good exposure and a few hundred dollars if I spun it right. It is sometimes a fine balance between inhabiting my life and making it into a story to be sold. The essays here vary in terms of their helpfulness in thinking and feeling through these quandaries, since they also vary in artfulness and depth, but as a collection, they present a full and textured picture of the hypocrisies, windfalls, and compromises inherent in commodifying creativity.

Good writing holds a mirror to our politics, our untold triumphs and shame, our unexamined beliefs and assumptions. It’s a writer’s responsibility to produce work that challenges society and doesn’t pander to what will make the most money. Editors, agents and publishers will urge us to write towards what will draw the largest check, the most hits on social media, but each writer must determine when she needs to produce work that lives up to her artistic integrity, and when she must write to keep a roof over her head. Scratch offers a plethora of opinions and wrestling with this conundrum. What’s yours?

Gila Lyons’ work has appeared in Salon, Cosmopolitan, Refinery29, Vox, GOOD Magazine, BUST Magazine, The Rumpus, The Millions, The Morning News, Brevity, Tablet, Fusion, and other publications, and shared and reviewed on Reddit, The Huffington Post, Longreads, Vela, New York Magazine, and anthologized in books and collections. She holds an MFA in literary nonfiction from Columbia University, teaches college writing and literature, and is at work on a memoir about seeking a natural cure for anxiety and panic disorder but falling prey to the underbelly of the alternative health movement. Links to published work can be found at www.gilalyons.com. Follow her on Twitter @gilalyons.