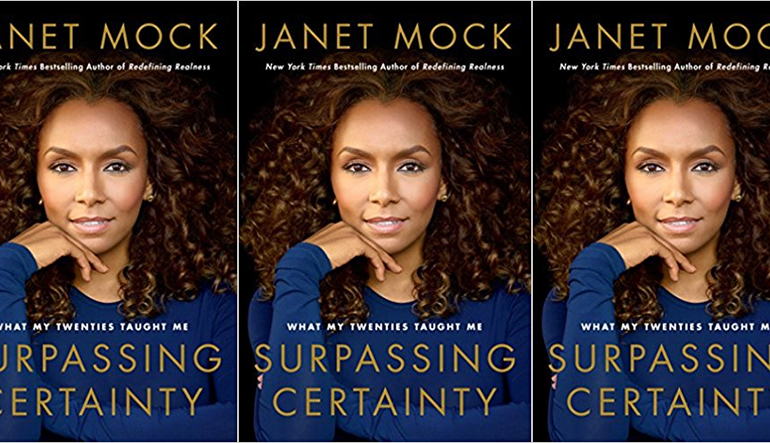 In 2011, Janet Mock came out publicly as transgender. In 2014, Mock published the groundbreaking memoir Redefining Realness: My Path to Womanhood, Identity, Love & So Much More. The NYT bestseller records a childhood of poverty and upheaval, including the hardships she experiences as she comes to think of herself as queer, then transgender. As a teen, she turns to the sex industries for community, survival, and resources to fund her medical transition. The larger arc of the book follows her through different configurations of her black and Native Hawaiian family through Oakland, Oahu, Texas, and into adulthood in New York.

In June, Mock published a second memoir, Surpassing Certainty: What My Twenties Taught Me. As in Redefining Realness, Mock’s style flows effortlessly between well-crafted scenes, transgender 101, and political commentary. Both volumes are deeply honest, revealing stories that are simultaneously never-heard-before and yet solidly rooted in the tradition of contemporary black women memoirists that began with Maya Angelou’s 1969 I Know Why the Caged Bird Sings.

Early in Surpassing Certainty, we find Janet working her way through college as a stripper:

Backstage was where we laughed at the desperation of patrons, swapped shifts when someone’s childcare fell through, or offered to give someone a ride home. My feminism is rooted in the conversations I had backstage, where these working women spoke it plain and persevered.

In the strip club, Mock meets her first husband, a handsome white sailor from the mainland, her first lover to whom she discloses her transgender identity. His additional allowance as a married serviceman assists Mock to continue her education, even as the marriage begins to crumble. She moves to New York, and pursues graduate school at NYU in journalism. In her new field, Mock learns lessons about racism, colorism, and the challenges faced by women of color in magazine publishing, even in her chosen field of entertainment news. Yet she perseveres. In her interview at People magazine, she boasts, “I have an encyclopedic knowledge of pop culture and know the lyrics to every Top 40 song since 1990.” She lands the job, and uses her eventual editorial position to include greater representation of LGBT communities and people of color.

A constant theme of the book, however, is Mock’s profound isolation, reinforced by her “stealth” status, “wearing that cloak of normalcy” where she is seen as a cisgender (non-trans) woman:

These assumptions felt like a belonging and a welcome, but they also felt like an othering. I rarely ever corrected these assumptions because I didn’t want to be pushed out of the sisterhood I…pulled out the tampon I kept in my handbag just in case.

Ultimately, Surpassing Certainty closes similarly to Redefining Realness, where Mock lands with her now husband, photographer Aaron Tredwell, but this time she also has the dream job. It is a fairytale ending, befitting a pop culture lover like Mock. However, given the epidemic rates of real-life violence, suicide, and exclusion facing the transgender community, Mock’s happily-ever-after is a refreshing twist.

Aya de Leon teaches creative writing at UC Berkeley. Kensington Books published her debut feminist heist novel, Uptown Thief in 2016, which won first place in both the Independent Publishers awards and the International Latino Book Awards. The Justice Hustlers series continues with The Boss in 2017 and The Accidental Mistress in 2018. Her work has appeared in Ebony Magazine, Guernica, Writers Digest, The Toast, Bitch Magazine, VICE, Huffington Post and on Def Poetry. She blogs and tweets about culture, gender, and race at @AyadeLeon and ayadeleon.com. She is also at work on a picture book to help talk to kids about racism and just finished a YA black girl spy novel called Going Dark.