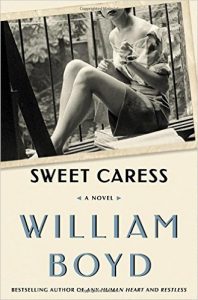 Sweet Caress is the newest novel from the acclaimed William Boyd, author of notable works such as Any Human Heart and A Good Man in Africa.

The novel centers on Amory Clay, one of the first women to be a war photographer in the 1900s. We follow her from childhood to the beginnings of her career as a society photographer, through to her first assignment on the ground in World War II, and finally to her late-in-life journey to Vietnam.

The scope of the book is enormous, spanning nearly the entire twentieth century. Interestingly, it reads in many places like a memoir or an autobiography. The writing is tight, the use of language perfectly suited to the time period, and the structure carries the reader through seamlessly. While the majority takes place in chronological order from the beginning of Amory’s life to the end, there are sections within each chapter titled “The Barrandale Journal 1977,” which are in Amory’s present day.

In the lead-up to writing Sweet Caress, William Boyd apparently amassed a collection of retro images from the early and mid-twentieth century, finding them at junk shops and other random places. He then shaped Amory’s story around them, illustrating the novel with these pictures of strangers from the past—in essence, giving them a story.

The photographs give the novel a sort of eerie, unsettling quality. Because it is a work of fiction, the reader knows that what is being said about these pictures isn’t true. We also know that there is a real story behind the German soldier with his face smashed in, or the line of prisoners of war marching through the mud. However, images of “Amory” exiting a car in her wedding dress, or a group of bright young things in a 1920s club, breathe remarkable life into the pages.

It seems it will always be a topic of conversation when an author chooses to write from a perspective thought to be “opposite” of his own, as Boyd has done here by telling a woman’s story—especially in the first person. Overall, I think he is successful in the telling, capturing a woman’s voice (as if there is such a concrete thing) and reactions to situations quite well.

Amory has thoughts similar to mine, looks at life through a lens that I think many women do—constantly reflecting on the past. What has she done, what might she have done differently? She muses:

“I was thinking about the mistakes we all make – or rather the concept of a ‘mistake’. It’s something that can only be realized in hindsight – big mistake or a small one… We don’t sense mistakes coming, there’s this crucial unforeseen factor to them. So I found myself asking the question: what is the opposite of a mistake? And I realized there wasn’t a word, in fact, precisely because a mistake always arises from best intentions that go awry.”

Anything Amory views as a mistake is only in her Barrandale journal, where she looks back on what she has done and the impact her early experiences had on the trajectory of the rest of her life.

Sweet Caress surprised me. It tackles the World War II era without being political, staying true to the perspective a woman who just wanted to make her name as a photographer, rather than discussing Hitler and Nazi Germany to any extent. The novel also deals with euthanasia and doctor-assisted suicide—currently a hot-button issue, and handled with great respect and care by the author. The only thing that baffled me throughout was the title. It sounds like a classic romance or perhaps a book of poetry—certainly not the work of historical fiction that it is.

Amory Clay is a fierce, capable, independent woman in control of her life and destiny. Anything less than the most competent, stubbornly resilient character may have seen this novel fall flat, but fortunately, Miss Clay and her rich life experiences held it aloft.

Amy Suiter Clarke is an American novelist, freelance writer, and avid reader who currently lives in Melbourne, Australia. She writes fiction for herself and content for others.
Twitter: @asuiterclarke
Website: www.asuiterclarke.com