Home
»
Book Reviews
»
Nonfiction
»
Review: TELL ME HOW IT ENDS: AN ESSAY IN 40 QUESTIONS by Valeria Luiselli 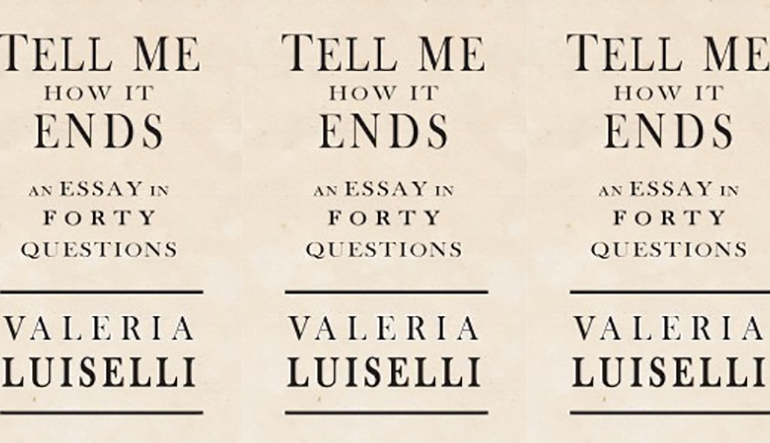 Here’s a challenge: tell me a story, without knowing the beginning, middle, or the end. Now, tell it in your second language, or one where the handful of words you know transforms you back into a child. No, let’s say you are a child. Let’s say this conversation will be recorded, and what you say—and how you say it—will determine where you are allowed to live. Let’s say you came alone.

This situation happens every day at the immigration courts in New York City, where novelist and essayist Valeria Luiselli volunteers as an interpreter. In her expanded essay Tell Me How It Ends: An Essay in Forty Questions, Luiselli outlines the intake form for undocumented minors. The procedure, on paper, is simple: Luiselli presents the questions, the children speak, and Luiselli transcribes their answers in English for the lawyers who will fight to secure their legal status.

“But,” Luiselli writes, “nothing is ever that simple.” Each child must do verbal gymnastics to illustrate the journey that led them to this room. Before the first word is even said, Luiselli knows that “eighty percent of the women and girls who cross Mexico to get to the U.S. border are raped on the way.” According to the National Human Rights Commission in Mexico, over eleven thousand immigrants were abducted between April and September 2010, building on the one hundred twenty thousand immigrants that have gone missing since 2006.

Tell Me How It Ends, though, is not just a recitation of facts meant to overwhelm. It also details Luiselli’s own hardships trying to protect herself and her family. Luiselli describes how “according to the slightly offensive parlance of U.S. immigration law, for the three years we’ve been living in New York, we have been ‘non-resident aliens.’” She explains that ‘aliens’ is the broad legal term for “Anyone outside the United States, whether or not they are residents.” There are three types: illegal aliens, non-resident aliens, and resident aliens. While waiting for their green card applications to be processed, Luiselli jokes that she and her loved ones were “pending aliens.”

On a road trip to the southwest, Luiselli looks at her children sleeping in the backseat and wonders: “Were they to find themselves alone, crossing borders and countries, would my own children survive?” Yes, her personal investment adds further tension to a piece raw with relevance but Luiselli never lingers on herself for too long. It always shifts back to panoramic view—to a call for awareness, action, and accountability.

“Because being aware of what is happening in our era, in our countries, and electing to do nothing about it is unacceptable,” Luiselli writes. “Because we can all be made accountable if something happens under our noses and we don’t even dare to look.” Responsibility, Luiselli reminds, claims, insists is a duty we all share, even if our individual contributions are small.

Luiselli writes about the realization that her role as an interpreter at the courts may well amount to nothing, that “our only role in the court was to serve as a fragile and slippery bridge between the children and the court system.” A bridge that might not even hold a  single swan, much less thousands of children. A bridge that cannot be held by just two, or four, or a hundred hands. Even non-profits “can only provide a kind of patchwork and not even the sum of all of them can ever manage to fill in all the need-gaps.”

It’s hard. And Luiselli herself admits that “telling stories…cannot reassemble broken lives.” What it might do, though, is provide “a way of understanding the unthinkable.”

The postal service lost Luiselli’s green card. When her family returned to Manhattan from their road trip, the other three cards were “waiting for us in a stack of mail piled high by the door.” At the same time, her provisional work visa had expired, forcing her to resign from her teaching job right before her students’ final exams. “I wondered if I was ‘allowed’ to write,” Luiselli writes, as she was told she could not work without pay. Still, she did, “because it was the only thing I could do to avoid going crazy. And I knew that if I did not write this particular story, it would not have made sense to return to writing anything else.”

In the last section of Tell Me How It Ends, in the epilogue, Luiselli returns to the first question on the intake form for undocumented minors: Why did you come to the United States? After hearing so many stories, after examining her own, she ponders whether the two answers are simply “I don’t know” or “Because I wanted to.” And maybe it can be both, at the same time.

Perhaps more insightful, though, is Luiselli’s idea that “the people who come to this country are ready to give it everything, or almost everything, in order to stay.” In her mind, “to stay is the founding myth of this society.” For a chance “to play a part in the greater theater of belonging,” there is most nothing an “alien” might not give up: “No matter the cost. No matter the cost of the rent, and milk, and cigarettes. The humiliations, the daily battles. You will give everything.”

And what will you do?, the essay seems to ask. As a born-American citizen, what would you give up? What would you to do stay, to fight, even if you were guaranteed all rights before you left your mother’s womb? Thorough, vulnerable, and compassionate, Tell Me How It Ends offers deep inspection on what may be perceived as a “long-resolved issue.” Luiselli writes to keep our eyes open.

Annalia Luna is a contributor at HTML Giant. She earned her B.A. in Literature & Music from Butler University. Her work has been published at The Rumpus, Ploughshares, The Literary Hub, & Heavy Feather Review. She lives & writes in Houston, TX.