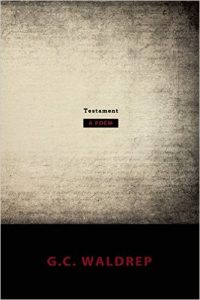 An endnote to G. C. Waldrep’s excellent new book-length poem points out that it “originated as a exploration of and response to three texts,” Lisa Robertson’s Magenta Soul Whip (2009), Carla Harryman’s Adorno’s Noise (2008), and Alice Notley’s Alma, or The Dead Women (2006). It is no new thing for good poetry to inspire more good poetry, but since cross-fertilization is a sign of robustness, such acknowledgements are good to have.

Not that Testament is strikingly similar to the three named texts, at least superficially. The Robertson, Harryman, and Notley books are unclassifiable genre-benders, but the cover and title page of Testament plainly identify it as “a poem,” and it looks, reads, and even sounds like a poem—Waldrep writes for the ear as well as the eye, embracing musicality more freely than many current poets. Harryman’s and Notley’s books have a particularly hard political edge, mounting a resistance to the fear-as-policy bleakness of the Bush-Cheney years. In Waldrep’s poem, although references to gender, capitalism, and race are frequent (likewise for history, faith, and the Trillingesque “moral imagination”), questions outnumber answers (“Ask yourself: is it your country? Do you / belong there? Does gender?”), and even the assertions come wrapped in enigmas:

Capitalism swaggers
Outside language in the chrome shadow of
Something like an enormous, gleaming motorcycle
We aren’t sufficiently afraid of. Not yet.

Another aspect of the Notley, Harryman, and Robertson books (and a remarkable one, since political commitments usually involve an identifiable subject position) was that their speaking subjects were contingent and shape-shifting. The title of Waldrep’s book may evoke the stable identities we presuppose stand behind wills and witnesses, but he too keeps the speaker elusive (his previous book, Your Father on the Train of Ghosts, was an experiment in the collaborative construction of a lyrical subjectivity with poet John Gallaher). The poem was originally drafted at the Hawthornden International Retreat for Writers, and traces of that stay abide in references to an “Egyptian novelist” and “British poets”; there is also a “you” and an “us” and a kitchen that was “a delirious semblance / of all our commensal desires.” Winding among such landmarks, though, is a network of mistakes, a selfhood seemingly composed mainly of words misheard or misread, of memories misremembered, of accidents.

The scope of the book is difficult to convey in a brief review, or I would try to unpack Waldrep’s exploration of sense and memory in the recurring image of the bee, the eye, and the flower; or attempt to summarize his inquiry into language in the third of the book’s five sections; or ask whether the references to ribs and flaming swords are intended to evoke Eden and the Fall, and whether that fall connects to the various references to Icarus. The most concise reference point that occurs to me, though—Notley, Robertson, and Harryman notwithstanding—is that Waldrep is the closest American poetry comes to Geoffrey Hill, in the music of his language, the range of his erudition, the integrity of his intellect, and the honesty of his doubt.