Home
»
Book Reviews
»
Nonfiction
»
Review: THANK YOU FOR BEING LATE: AN OPTIMIST’S GUIDE TO THRIVING IN THE AGE OF ACCELERATIONS by Thomas Friedman 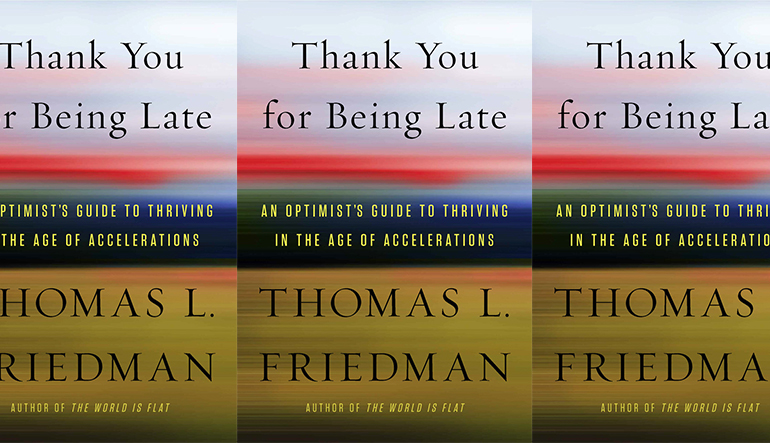 Thank You for Being Late: An Optimist’s Guide to Thriving in the Age of Accelerations
Thomas L. Friedman
Farrar, Straus and Giroux, November 2016
496 pp; $28

In 1965, an electrical engineer named Gordon Moore made a prediction.

Moore—then only years away from co-founding Intel—observed the number of components in a microchip doubled every year. He expected this to continue for the next ten years. In 1975, he revised this forecast to approximately every two years. His observation was later popularized into what’s now known as “Moore’s Law.”

Moore’s Law became a general target for the semiconductor industry, and continues today as a benchmark for tech titans like IBM, Apple, and Oracle. The ethos of the law—exponential growth—has also been applied to network capacity, library expansion and DNA sequencing. The nature of the law discourages it, but if we take a moment to step back and survey the impact of this law on the human condition, things get ugly.

In Thank You for Being Late: An Optimist’s Guide to Thriving in the Age of Accelerations, Thomas L. Friedman’s title hints at a need for what we’re losing in today’s world. Namely, all the imperfections that make us human. After all, being late and being wrong is what being alive is all about.

Computers—steadfast workhorses they are—notify us when we’re late, remind us so we don’t forget, and rest only when we ask them to. They carry out complex demands and create possibilities that save lives in a hospital and enlighten minds in a classroom, but no one’s expecting good bedside manner or a parent/teacher conference from your personal computer. We’ve made these machines the pillars of purposefulness, but, as Friedman laments, by doing so jeopardized our condition and the survival of the planet.

Friedman hails from an idyllic town in Minnesota with a strong sense of community. It sounds friendly, safe, and endangered in 2016 America. After a divisive election season full of populism and rhetoric, he implores us to appreciate what we have instead of what we deserve. It’s a timely message, and he illustrates it remarkably with portraits of a world gone wrong.

Our world is changing at an amphemetic pace. The leaps and bounds of technology often side-step traditions and customs, and Friedman worries kind-heartedness will be marginalized.

One stop on his highway to dystopia is a dairy farm in Upstate New York. Our image of cows milked by a farmer every dawn is both outdated and inefficient. Owing to the myriad of demands on the dairy industry, computers increasingly control and monitor udders, supply chains and milk flow.

In spite of the gloomy forecast, Friedman remains stubbornly optimistic. He bemoans, “in the future a successful cow milker may need to be an astute data reader and analyst”, yet he also acknowledges the enduring influence of kindness, a universal language that’s as powerful as ever.

Tags:FSG, Optimism, Thank You for Being Late, Thomas L Friedman