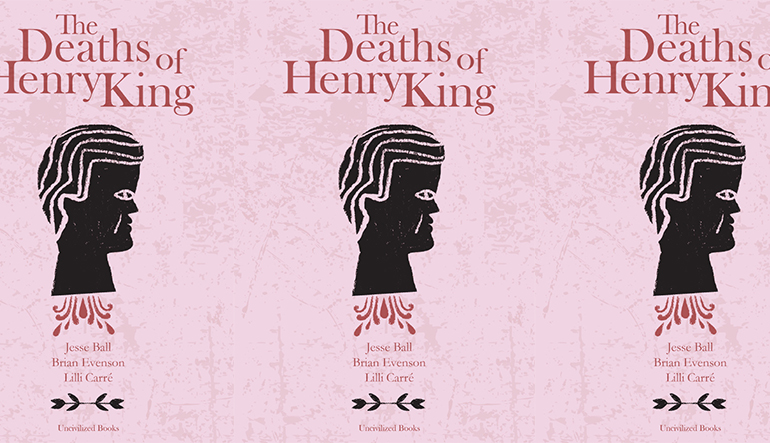 You are walking through a graveyard. It’s probably, for the sake of argument, a chilly November evening; we can safely assume the moon is full and there are russet-colored leaves on the ground. You look at the headstones, checking the dates and names for potential personal coincidences. Maybe you even dream up each person’s death, taking pleasure in picturing them in the throes of whatever grisly scene you imagine. It’s purely playful, until it gets weird. The name on every single headstone is exactly the same.

In The Deaths of Henry King, the titular Henry King dies no less than eighty-nine times. He is the man whose bodies are found in this imagined graveyard; this book contains the epitaphs and gravestone rubbings found there. Acclaimed novelists Jesse Ball and Brian Evenson, true masters of the uncanny, craft bizarre little anecdotes describing all of the various ways in which Henry King meets his maker. Lili Carré’s illustrations accompany their words and bring the deaths to life with her iconic woodcut style. Some of the deaths last only a sentence while others may take up a full page, but each one performs what is advertised: the death of Henry King.

Some endings are truly macabre, while others are absurdly poetic. Some even read like writing prompts: “Henry King would have been fine if…” There are passersby and others who also inhabit the worlds of Henry King’s deaths and offer commentary on him and his demises: “Henry King fell down the stairs in a building nearby. There wasn’t a mark on him. ‘You would think he had survived,’ said a girl.”

Not all deaths described in the book are physical or occur in reality. When Henry King has an orgasm in a “House of Ill Repute,” that is a death (but he definitely does also suffer heart failure from too much Viagra). It is important to remember that change and transformation is a kind of death too, as in “his last memory as Henry King…” Strange omens lead to death, and there are bad signs and weird tendencies, perhaps prompting the question of whether or not Henry King ever invites death upon himself.

Certain demises are particularly gruesome, even if the reader has to fill in the blanks: “Henry King discovered that the inside of Henry King looks like any meat one might buy at a butcher’s shop.” Not every death is actually described; sometimes it is shown in the illustration, and sometimes the aftermath is written and the death itself can be inferred from the text: “Henry King argued fruitlessly with Charon.” The deaths are not always immediate, which prompts questioning into all of the unrecorded deaths of Henry King that may go unwritten and unread: “…the meal that, months later, would end up being the death of him.” Sometimes the stories or snapshots cut out before the whole narrative is given, ending with cliffhangers, reporting the death but withholding the obvious other things going on around it: “He had time to do one last thing.”

Perhaps this book is an investigation into the many different ways in which a person can die. How to describe death? When does death occur (no medical students, please)? What is it to die, actually? One might consider how death figures in literature more broadly—how often it functions as a literary convention or symbolic representation, or is expressed via metaphor. Writers may strive to demonstrate how deaths fit into an overall scheme, or draw extra attention to the manner in which a death is senseless, flexing their contextual chops to inform the death and give it their own meaning. A great deal of the attraction in The Deaths of Henry King is the fact that its barrage of ends is utterly without context or any apparent overall scheme. Anyone could read whatever they want into this book; a particularly interested reader might try to put together patterns, way-throughs, plumblines connecting the deaths: is there a plot to be found? Maybe it’s a jigsaw puzzle of short stories.

There are sculpted deathmasks, gravediggers, warnings, poisonous fungi, dead telephone lines, corpse decoys, space travel, biblical portents, eating contests. This is a world much like our own, where danger lurks on every flight of stairs and piece of glass. Readers may easily be reminded of Edward Gorey’s The Gashlycrumb Tinies (1963), in which alphabetically ordered children each die a simple, mundane yet grisly death. But The Deaths of Henry King comes to us from fresh minds and a wonderfully evocative illustrator. This slim volume is like a comical, absurd meditation on all of these ideas and more, an extended look at how to possibly render the end in narrative form. Most simply, though, this book is a grim pleasure to read, exceptionally well-made and perversely enjoyable. Walking through the graveyard, we notice a particularly poignant memento mori: “You are a certain Henry King.”

Delaney Adams is a reader, writer and bookseller living in New York.