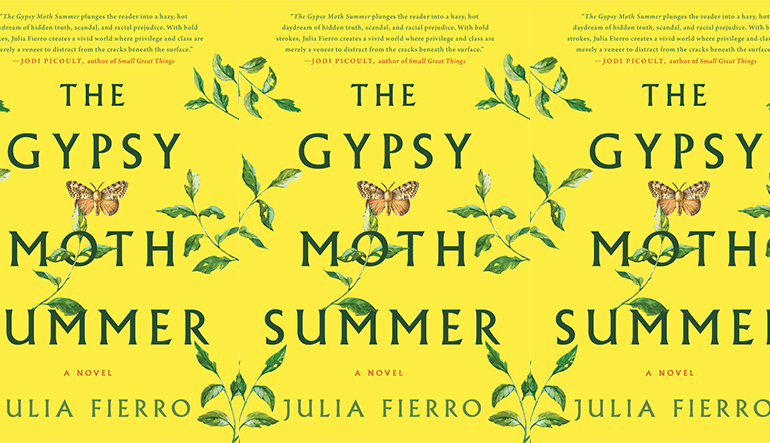 Julia Fierro is a master storyteller. In her new novel, The Gypsy Moth Summer, Fierro orchestrates a huge cast of characters and a vast array of storylines as she tells the story of the inhabitants of a small island in New York during the summer of 1992. Leslie—the daughter of the island’s wealthiest and most prominent family—returns to live with her husband and children in her parents’ palatial home. Her husband Jules is African-American, and both race and class are prominent themes here as this late 20th century Romeo and Juliet unfolds. Maddie, an island teenager whose parents are from different sides of the tracks, is attracted to Leslie and Jules’ son Brooks, and from there, the summer gets increasingly complicated as the characters’ lives become more intertwined.

Readers of Fierro’s first novel, Cutting Teeth, will be familiar with the way in which she expertly juggles multiple points-of-view. But this novel is more successful, I think, because the cast of characters is deeper and wider, ranging from Jules to Dom, Maddie’s younger brother, and to Veronica, Maddie and Dom’s grandmother. As always, multiple points-of-view allow us to see characters through different lenses, and this works particularly well here. The characters become three-dimensional because we learn about them from many varied perspectives, and, in the process, the fictional world becomes real.

The architecture of the book is well-developed and planned, with 51 chapters allowing the story to move forward at a quick pace. Our primary narrators—Maddie and Jules—introduce us to the story, and they each narrate 13 chapters over the course of the book, thereby telling half of the story. The other point-of-view characters—Dom, Veronica, Leslie, and Veronica’s husband “The Colonel”—tell the rest of the story, with the declining and mostly-not-lucid colonel only given one chapter that lands close to the center of the book.

Time and setting drive the plot, and Fierro’s language soars when she describes the island. Through her descriptions, we can see this lush place in full bloom in early summer and be reminded, perhaps, of that open-ended feeling of summer and possibility. Detailed descriptions of this place show us how important the setting is to the story, as we feel as though we, too, are there: “The flowerbeds, lily and iris and overgrown hydrangea in Easter-egg colors, reached into the perimeter of downy fern, and beyond it lay the woods, so it seemed as if there was no beginning or end to the greenery.”

There are many hard edges here—a pervading sense of doom hovers throughout—but my favorite moments are when we get to see the softer, more interior side of these characters. When Veronica—who is a particularly well-drawn and complicated character—allows herself to develop a relationship with her granddaughter Maddie. When Dom—who is troubled and often alone—reveals his longing for the old days with his big sister, when the two of them would re-enact their favorite Greek myths. When Jules—who feels isolated in this lily-white community—takes a moment to appreciate the garden that he has diligently pruned and excavated. It is in these quiet moments that the novel opens up to allow the characters to reveal their true selves.

The downside to a novel that is so fast-paced is that we wish we could stay in each moment for just a bit longer. Here, I wanted more time with each of the characters, to learn more about them, to truly understand what makes each of them tick. I also wanted the pace to slow so that I could consider and reflect upon the references that Fierro is making, including nods to fairy tales, to Greek myth, to Shakespeare. And there’s fascinating scientific information that Fierro provides on the gypsy moth phenomenon that I didn’t read carefully enough because I was more interested in chasing after the characters and the plot. Part of this is intentional, I think, as it underscores the go-go early nineties culture and Fierro’s facile way with plot and pacing.

But a book that one reads too quickly is not necessarily a bad thing. It just means that subsequent readings will continue to surprise and reveal.