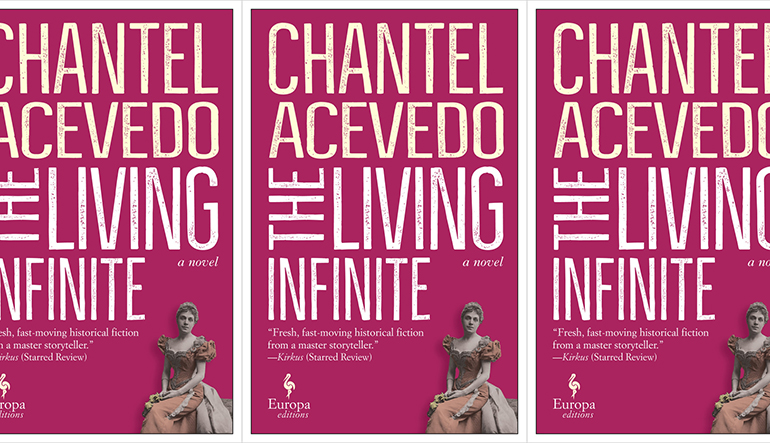 A rejection note from a publisher launches The Living Infinite by Chantel Acevedo on a less than promising note for Eulalia, Infanta of Spain. In that letter, Pedro Medina, the editor-in-chief of Ediciones Medina, laments that he does not “think well” of the project, Eulalia’s provocative memoir that portrays the court of Spain in an unsavory light.

“I say: women cannot demand perforce their share in the freedoms afforded to men. This applies, I daresay, even to an Infanta of Spain,” Pedro Medina writes. “I say: silence, too, is an act of moral courage.”

With such inflammatory words, the reader can imagine Eulalia’s rage on reading the rejection letter. How dare they command silence from an Infanta of Spain? This, in essence, is the novel’s driving question. More specifically: Who has a right to speak and who deserves to be heard?

For centuries in Spain and around the world, the answer to that question has been: Not women. Throughout their saga, the main characters—Eulalia, Tomás, and Tomás’s mother Amalia— struggle with the tension between being able to speak and being silenced.

After the rejection letter, the story commences in Spain at the time of Eulalia’s birth. Here, Acevedo mixes historical facts with her own inventions in such a masterful way that it is impossible to distinguish where history stops and Acevedo’s imagination begins. That, and her keen and sparing use of vivid details—such as the infant Eulalia’s presentation on a silver platter to the royal court—marks The Living Infinite as a masterwork of historical fiction.

But Acevedo’s talent doesn’t stop at her prose or even her research prowess. What illuminates Acevedo’s writing is how she weaves historical fact into a story that feels prescient in the contemporary cultural conversation. Many women are now raising their voices and being heard. Infanta Eulalia, who was born in 1864 and died in 1958, dares to write about her life, and that offends other characters, not least of which is her husband, whose reputation the memoir puts at stake.

Tomás, whose mother Amalia was Eulalia’s wet nurse, does not understand Eulalia’s compulsion to share the events of her life. Having been nursed from the same breast as Eulalia pairs them from infancy in a most intimate way; because of this, Tomás is referred to as Eulalia’s milk brother. “The Milk Brother” was even the working title for the novel. So their relationship, especially what Tomás thinks of Eulalia—and by extension, all women—becomes the novel’s driving force.

In an attempt to find a publisher for her novel, Eulalia enlists Tomás to accompany her across the Atlantic, first to a Cuba bristling with revolution, and on to Chicago for the World’s Columbian Exposition of 1893. By the end of this journey, her story will nearly be destroyed, but before they set off, Tomás’s solitary wondering presents the crux of the novel:

Later that night, back at his apartment, his mind returned to his mother’s assertion that women talk to one another in a way that men did not understand. He considered Eulalia, baring her soul, page by page. Who was her story for exactly? Perhaps there was something in the book that had spoken to Eliza Jane in a way that was not possible for Pedro or for Tomás. Perhaps Eulalia’s book was, after all, a conversation of the heart.

In that same vein, the entirety of The Living Infinite is a conversation from the heart. It humanizes men through Tomás as he realizes the world is hostile to the voices of women. Meanwhile, Eulalia chooses her own destiny and asserts her right to speak her mind, to literally do what she wants with her manuscript. Through the foil of their relationship, The Living Infinite asserts the right of all women to be heard.

Rebecca Renner is a writer and editor living in Boynton Beach, FL. Her work has appeared recently in New York Magazine, the Washington Post, and Electric Literature. She is working on a novel.