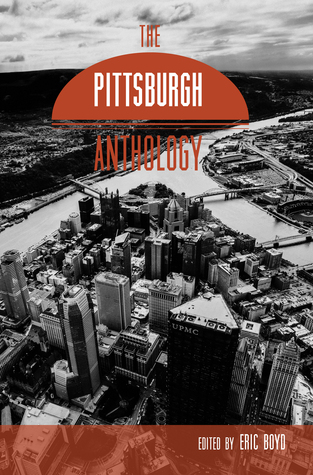 “Pittsburgh has always been a scrappy city, characterized by unflapping tenacity, even as outsourcing and the ills of globalization threatened its survival,” writes Kevin Tasker in “Rebirth of the Hollywood Lanes,” one of the final essays in The Pittsburgh Anthology.

Edited by Eric Boyd, the collection seeks to portray the many faces of Pittsburgh through literary journalism, memoir, graphic essays, poetry, photographs, paintings, and drawings. Its array of voices and images range from the iconic—the place where the Allegheny and Monongahla Rivers converge to form the Ohio, the gothic skyscraper known as The Cathedral of Learning at the University of Pittsburgh, the Steelers, Mr. Rogers, and Andy Warhol—to the less visible—who knew there was a banjo club?

Through portraits of a bowling alley, a real estate agent’s property listing, and an indie band, among others, the anthology offers glimpses into multiple facets of a vibrant city with a rich past, memorable characters, and distinctive places. Characters include a neighbor who welcomes the author to a new apartment building through a foot massage and unexpected wisdom (“Won’t You Be My Neighbor? “ by Rachel Mabe); a civil rights photographer who brings to light seemingly invisible parts of history (Yona Harvey’s “The Missing Made Visible: In the Footsteps of Teenie Harris“); an alcoholic uncle who introduces the young narrator to a new, frightening world (“The Bottoms” by Matthew Newton); and a hipster/hunter and a steeler’s fan, among others (Rebecca Morgan’s full-color paintings.)

The variety of places represented include the Allegheny County Jail, which is the subject of both Jess Craig’s lovely essay “Hour of Love” and Robert Qualter’s vivid oil on canvas. National Book Award Winner and McArthur recipient Terrance Hayes’ poem “At Pegasus” seeks to understand desire as it juxtaposes childhood memories with a visit to an alternative dance club.

Some of the most affecting pieces deal with the attempt to patch together a living while seeking meaningful work, invoking a universal struggle filtered through the particulars of a traditionally working class city that is also a hub of education, medicine, and technology. In “Rust Belt Heroin Chic,” Ben Gwin writes a spare account of the anguish of a single father with an addicted ex-wife. Anthology editor Eric Boyd recalls giving plasma and participating as a subject in healthcare studies in “Look, Decrease,” while Dave Newman poignantly recounts a field placement assignment at a social services agency in “A Middle Aged Student’s Guide to Social Work.” In “I’m into Leather,” Lori Jakiela recalls, with characteristic humor and lyricism, youthful ambition and uncertainty as a graduate student who “liked to drink when I had poet-emergencies over heartbreaks and line-breaks and bitchy form-poets who counted syllables by whacking pencils against their teeth.”

Characterizing a place can be an elusive project, but The Pittsburgh Anthology is a diverse, surprising, eloquent, playful, scrappy, and tenacious effort to capture one city’s “proud contradictions.”