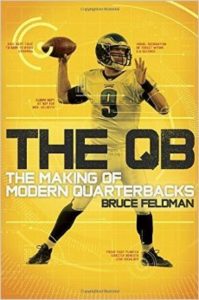 Like the casting of James Bond or the election of presidents, the styles, moods, and values of the NFL’s starting quarterbacks in any given generation provide a meaningful reflection of where American masculinity is oriented. So no big surprise, then, that the manicured post-adolescent quarterbacks profiled in Bruce Feldman’s The QB—and, but of course, their omnipresent and phenomenally expensive private tutors—resort to the airy jargon and buzzwords of modern business whenever they get excited.

One of the main characters in The QB is Trent Dilfer, who was an average quarterback—as far as NFL-caliber quarterbacks are concerned—from 1994 to 2007. Dilfer’s verve for life, though, seems to have been only awakened in retirement by running Elite 11, a workout-camp-slash-TV-show focused on grooming the nation’s most promising high school quarterbacks. Excuse me: Elite 11 is a “forward-facing platform” focused on establishing a “holistic coaching ecosystem.”

Running the camp—never mind participating in it—is a demanding and time-consuming process. On the summer day in 2013 when Dilfer must winnow eighteen remaining prospects down to that year’s Elite 11, he elects to be present at the camp instead of being with his wife on their twentieth anniversary. Apparently it was no biggie. Quoth Dilfer: “‘As painful as it was, it was so defining for me that I knew I was exactly where I was supposed to be. That I was doing what I was supposed to be doing. I think they know I’m better as a husband and father, and as a man, when I’m whole.’” Who “they” is remains perilously ambiguous, even in the full context of the scene. One’s mind can only sadly wander to poor Mrs. Dilfer, alone under the sheets that night, widowed by a pack of teenage jocks.

In the same way the domineering stage mothers of Toddlers in Tiaras can hold a viewer (or, at least, this viewer) in rapt, couch-bound attention, the private tutors in The QB enthrall with their catty rivalries. The “Dreammaker” will scuffle on Twitter RE: proper coaching methods with the “QB Whisperer from Dime City,” which is of course followed up with some passive-aggressive bickering when the pair show up, coincidentally, at the same lush Southern California sports complex, their respective prize pupils in tow. Since the quarterback prospect himself tends to have a father who is preoccupied with being the seven-figure CEO of such-and-such company (how else to afford lessons that go for $700 an hour?), does one’s heart warm at the familial bonds cemented when these new surrogate fathers vicariously measure their self-worth through the performance of their new surrogate sons? Heh.

Not that Feldman, a journalist swooping in from the outside, is at all responsible for establishing this culture of the thoroughly synergized Alpha Male. Well, maybe he does sip deeply from a given guru’s Kool-Aid from time to time. But still, just like documentaries Somm and Jiro Dreams of Sushi leave their audiences appreciative of the lengths that their subjects will go to perfect their chosen craft, The QB is a portrait of craftsmen who are admirably attempting to scale the impossible peaks of perfection. The QB will look even more interesting five, ten years in the future, as certain of its adolescent subjects go on to succeed (or not) in the NFL.

No matter how polished the pitches from the likes of Dilfer or the “Dreammaker” become, though, none of their services are useful unless their students approach the lessons with a phenomenal work ethic—a truism that somehow appears to be lost on all of Feldman’s subjects. The most-discussed quarterback in The QB—and also in the rest of America—is Johnny Manziel, whose phenomenal in-game improvisation skills flummoxed college opponents but were easy to diffuse for his more-skilled NFL opponents in the winter of 2014, Manziel’s disastrous rookie season as a pro. Feldman follows Manziel in 2013, when the quarterback has carte blanche access to the most sought-after tutors, but it seems that in every other chapter Manziel is showing up to a lesson, camp, or practice hung over from the previous night.

The most enlightening anecdote in The QB involves Peyton Manning, who has continuously been one of the NFL’s premier quarterbacks since his debut in 1998, although he is only a background character in this book. The story goes: during Manning’s time at the University of Tennessee, he used an off day to unload a trunk full of VHS tapes—game footage that Manning used for scouting—at the team facility, presumably to make room for more tape in his voluntarily maintained home library. At this point in the nineties, the private quarterback tutor had not yet been invented.

The two quarterbacks that you will see in this Sunday’s Super Bowl—Russell Wilson of the Seattle Seahawks and Tom Brady of the New England Patriots—unquestionably resemble Manning in this way, and Manziel might as well be an alien. Their success is hard to fathom, and of course impossible to replicate, but at least it’s not a secret how they arrived there. They put in the work.