Home
»
Book Reviews
»
Nonfiction
»
Review: THE RULES DO NOT APPLY by Ariel Levy 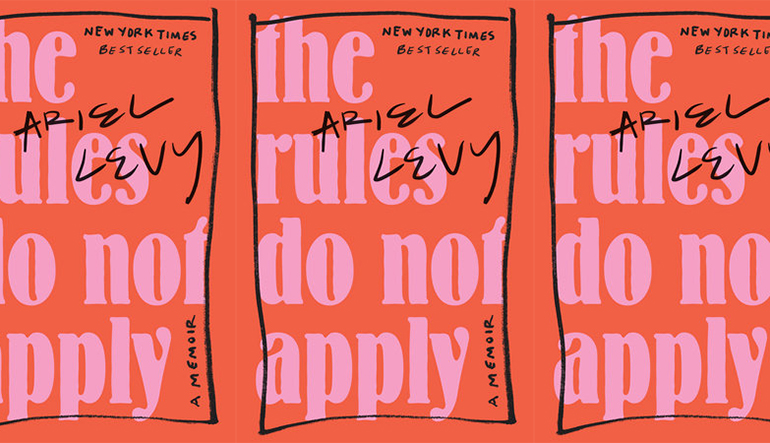 A staff writer for The New Yorker, Ariel Levy describes her beat as “women who are too much.” She has profiled Edith Windsor, the plaintiff who took on the Supreme Court to dismantle Defense of Marriage Act; Caster Semenya, the Olympic runner whose gender legitimacy was routinely questioned when it was found that she was born intersex; and Lamar Van Dyke, the last member from the Van Dyke lesbian separatist movement; among other women whom society has deemed extra. In The Rules Do Not Apply, Levy takes on another woman who is too much: herself.

“People have been telling me since I was a little girl that I was too fervent, too forceful, too much,” she says. “I thought I had harnessed the power of my own strength and greed and love in a life that could contain it. But it has exploded.”

The memoir is a comprehensive look into Levy’s life, where she was raised to believe that if she worked hard enough she could, in fact, have it all. She acknowledges her privilege, and shares that her parents were open minded people. “Are you impressed with how cool I am being about all this?” asked her father when she brought home her first girlfriend in college, and her mother’s greatest concern when she announced that she was marrying a woman was that she was adhering to a societal construction, nevermind worries of gender or sexuality. Her mother simply wanted to raise a daughter “who wasn’t dependent on a man,” or anyone for that matter.

This self-sustaining ideal ties into her writing career, her writing life, which she believed, even back when she was just an assistant at New York magazine, “was the solution to every problem—financial, emotional, intellectual.”

Her writing has been a constant throughout her adult life, and served as a confidant while growing up as an only child in Larchmont, New York. It has even been there for her when, at almost five months pregnant, she gave birth on a bathroom floor while on assignment in Mongolia.

Despite Levy’s realization that we can’t have it all, she offers up a silver lining, perhaps without even realizing it. There’s no reprimanding people—women, in particular—for having the audacity to believe that they can achieve anything. Levy has instead emerged as a woman who isn’t trying to be likable or in any way apologize for her actions: being the other woman, cheating on her spouse, falling in love with the South African doctor who first treated her after her miscarriage.

She’s unapologetic in a way that is often only seen in fictional women, whose worst fallout is a cancelled TV series or poor sales at the box office. In an age where female ambition is still deemed taboo, where driven women are often criticized for being overzealous while their male counterparts are lauded for their commitment, voices and stories like Levy’s are necessary.

Lillian Brown is the travel essays editor of Cleaver Magazine. Her work appears in publications including The Huffington Post, xoJane, and Cliffhanger, a TV blog on Medium that she runs.