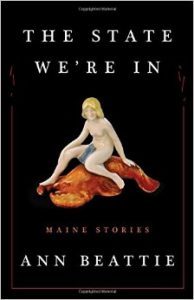 Maine, for Ann Beattie in her new collection, is a state of life, and that is the beautiful trick of the title, The State We’re In: Maine Stories. It is both the state, as in the location, and a state as in the way of being. Maine has two monikers, the first being the state’s nickname, “Vacationland,” and the second being the state’s motto, “Welcome to Maine, The Way Life Should Be.” Beattie’s new collection takes the spirit of both throughout the series of “linked” stories.

The heart of the stories is centered on the small, beautiful details of life in the day-to-day of Maine, such as when Jocelyn meets up with her friends late at night on the beach in “What Magical Realism Would Be”:

Jocelyn laughed and toed a little wet sand toward them. It was their ritual: they’d send some wet sand in the other’s direction, sand like instantly appearing wrinkles, or like a pug dog’s scruff. Angie’s mother had two pugs. They snorted all night and kept everyone awake. Angie could do a very funny imitation of everyone: her distraught mother, talking to the dogs; her father, throwing them out in the middle of the night; the pugs, snorting.

In one small paragraph, Beattie has moved from an endearing yet trivial motion of sand-flicking into a seamless memory and strong characterization of Jocelyn, her thought process, and her concerns. It’s damn funny, too. There’s a certain rhythm in this process, of meeting the character and then using an inconsequential action to dive into his or her heart and mind.

Beattie constantly thrusts Jocelyn into situations where she might be able to achieve some minor enlightenment or broad-scale empathy, but Jocelyn continually comes up short. In the final story, in the final pages, she finally loosens the shackles:

Jocelyn had to go forward, she couldn’t look back. Not even at the indentation in the sand where they’d had sex. The sand wouldn’t look different, and if you bothered to turn around and look, who wouldn’t want what met their eye to be worthy of their hesitation, their double take, special? Sand was ordinary.

As Jocelyn remembers this moment she fights against it by making it mundane. It is this moment, this night, instead of all the hope and effort of her aunt, uncle, and teacher have used to push her towards adulthood, that is the accidental catalyst for Jocelyn to plunge into the deep end of maturity: “She went to an auction with her aunt and uncle when she was seven weeks pregnant.” The transformation is so stark, so sudden, that it feels like a sublimation. Jocelyn’s state, her state of life, her state in Maine, her state of mind, have suddenly rocketed forward, and as the story and collection come to a close Beattie shows the reality of what it means to spend time in a place called, “Vacationland.” The sun eventually sets. The snowbirds soon fly away.

Mike Broida’s work has appeared in The New York Times Book Review, The Washington Post, The Millions, The Kenyon Review Online, and other publications. He currently lives and works in Boston.