Home
»
Book Reviews
»
Nonfiction
»
Review: THE STRANGER IN THE WOODS: THE EXTRAORDINARY STORY OF THE LAST TRUE HERMIT by Michael Finkel 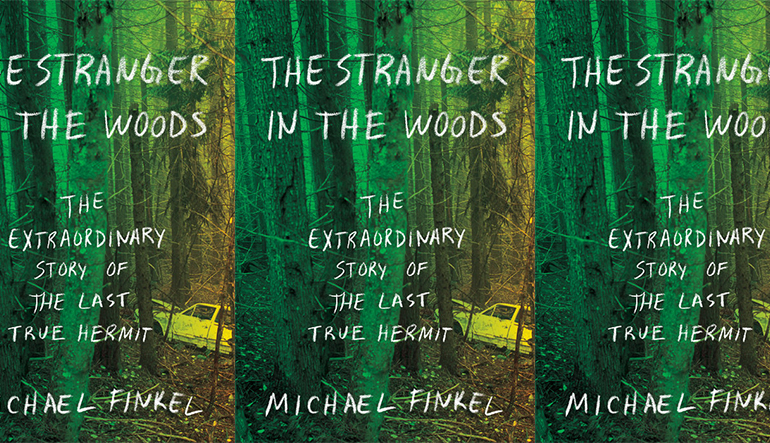 The Stranger in the Woods: The extraordinary story of the last true hermit
Michael Finkel
Knopf; March 2017
224 pp; $25.95

The Tao Te Ching is a Chinese classic text comprised of eighty-one short poems. They’re deliberately ambiguous, leaving plenty of room for interpretation and making an eminently quotable book. One line in particular, “Good walking leaves no tracks,” makes its way into Michael Finkel’s, The Stranger in the Woods: The Extraordinary Story of the Last True Hermit. Finkel chronicles the unusual, unsocial life of Christopher Knight, a man bestowed with the not-so-fantastic moniker of “The Last True Hermit,” and someone determined to leave nothing in his wake.

In 1986, at the age of twenty, without saying goodbye to anybody (and ignoring the Tao’s declaration that, “the truly kind leave no one”), Knight entered the woods of central Maine and never looked back. If this strikes you as particularly distant behavior, consider the fact his parents never reported him missing. Throughout The Stranger in the Woods, Finkel relies on excerpts from letters he exchanged with his subject, information he’s gleaned from research into hermits, as well as input from psychologists. That’s interesting stuff, but the book is most enthralling when we learn how Knight survives the brutal, unforgiving weather of the Northeast armed with a quixotic goal of purification and little else.

The book is strewn with quotes from Knight as Finkel constructs a fascinating character sketch of a man full of contradictions. At the end of the day, the reclusive Knight harbors as much resentment toward his fellow man as  your average commuter on the L train. The only difference is that Knight appears to cling to some kind of salvation in nature, a notion alien to most urban dwellers.

But any semblance of sanctitude fades when we learn Knight is indeed a rugged individualist, yet also lacks the basics. He doesn’t cook, has no access to medical care and even less knowledge of human relationships. Many times in The Stranger in the Woods, Knight comes across callous; more than once he’s just plain mean. For all his posturing, Knight’s survival hinges on the goods he pilfers from others. He might be twenty-seven years in the woods on his own, but he couldn’t have done it without burglarizing houses in the area.

Despite the incongruities of his subject, Finkel remains relatively neutral through the book, and it only enhances his narrative. The book closes without a clear explanation of why he did it, but Finkel never promised that anyway.

Aaron Sommers is a writer living in New Hampshire. His fiction has appeared in The Berkeley Fiction Review and The Olive Tree Review, among others. There’s more about him atwww.aaronsommers.com. He can be followed @aaronsommers.

Tags:biography, Knopf, Michael Finkel, nonfiction, The Stranger in the Woods