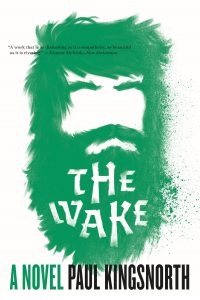 Much has been made of Paul Kingsnorth’s The Wake, crowdfunded to publication in England last spring and longlisted for the Man Booker Award. Set during and after the Norman Conquest of England in 1066, The Wake follows a free farmer from the Lancashire fens who sees dark omens in the sky—a haeric star (hairy star, e.g. comet) and a blaec fugol (raven)—and experiences the apocalypse they bring.

Part of the success of The Wake, as other reviewers have noted, is Kingsnorth’s evocative deployment of a “shadow tongue,” a unique blend of Old and contemporary English which infuses the medieval tale with unique verisimilitude. Kingsnorth uses only Anglo-Saxon words that were part of the English language before its Latinization, a result of the Norman invasion itself. Combined with old English syntax—little punctuation, no capitalization—the book reads ancient, Beowulfian, though its themes—lament for the good old days, helplessness in the face of change, the ending world—are familiar.

The Wake’s protagonist, Buccmaster of Holland, is similarly medieval; he’s gruff, violent, vain; when he refuses to serve in the anglisc King’s army, he winds up fighting the enemy anyway when he refuses to pay the frenc King’s tax levy. Consequently he loses everything—family, homestead, ancestral lands—and though he becomes a resistance fighter, his short temper and jealously of other grene men prevents him from trusting his fellows and accomplishing anything. Buccmaster seems a very unsympathetic character, but the monumental promise of his visions and the mesmerizing recollections of his childhood draw the reader in.

The real and addictive magic of The Wake comes from the synergy between its literary devices—the “shadow tongue,” the syntax, the close POV—and its subject matter. In the opening pages, foreboding historical epigraphs give way to the instructive voice of Weyland, the mythological blacksmith who goads Buccmaster on, convincing him he is indeed the ceosan one.

In fact, the first half of The Wake promises so much I could not see how Kingsnorth would tie things up in just 365 pages. In fact, he doesn’t.

Throughout The Wake, Buccmaster has more intense visions—first Weyland the Smith, then Iggdrasil, the Norse Tree of Life, and finally, Odin the One-Eyed himself—and yet, it feels as though nothing much comes of such buildup. Buccmaster and his small werod are betrayed, fractured; they struggle to regroup, waffle about what to do, suffer setbacks and ambush.

This disappointment, however, is not the end of the world. The Wake’s spell is palpable. Its style is audacious and original; Kingsnorth’s medieval angland is mesmerizing. This book will be read and remembered for those qualities, not for an ending which disappoints mostly because the beginning promises so very much.

Caleb True edits Barely South Review, the literary journal of Old Dominion University. His fiction can be found in Faultline, The Sonora Review, Ninth Letter and elsewhere. He holds an MA is history and runs the indie press Dynamo Verlag.