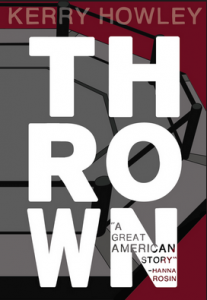 Being intimate with some sports is far from a guarantee that one is even acquainted with all of them. Personally I’ve never wanted to watch a single mixed-martial arts fight until reading Kerry Howley’s Thrown, a page-turner that has a lot to teach students of journalism, of creative nonfiction, and of fighting itself.

Criss-crossing the Midwest for one steamy gym after another, from Davenport to Milwaukee to Cedar Rapids, Howley spends the better part of two years tracking two fighters until she is nestled comfortably in their innermost circle: that is, invited over for the ritual living room screening of Pumping Iron at the end of another week in the gym. Having discovered both the fighters and fighting serendipitously, the chance inciting incident of her journey, Howley brings the reader along with her on the learning curve until we, too, are aghast at the screaming lack of understanding on display from the casual fans who surround her at cageside.

One of the fighters Howley follows is Erik “New Breed” Koch, whose next fight, in July, will be nationally televised. She meets Koch at the beginning of his painful metamorphosis from fighting boy to fighting man: having suitably dominated local opponents while training underneath his brother, Koch must move away from home for the first time to work with the big-time trainer, to fight the fights that could actually deliver financial stability. Even though Koch’s bouts gain bigger audiences in bigger venues—Las Vegas, New Orleans, Newark—he is not, somehow, the true protagonist of Thrown.

It’s hard to argue that the hero isn’t Sean Huffman, even though/because he still fights in small promotions around Davenport, with the incredible career record of 19 wins, 31 losses. Huffman quietly drifts through life, happily so but with little chance to establish the necessary victory-birthing routines, meaning there is a lot more weed and a lot less working out than one would expect from a professional athlete.

The ultimate difference between Huffman and Koch—who do not ever meet, and fight in separate weight classes—is that Huffman is, somewhere down at the genetic level, a fighter. That is not to say that Huffman has been predestined to win the fights he enters, but instead that he is totally at home while fighting. It seems, really, that Huffman’s foremost strength as a fighter is his ability to continue coming forward even while sustaining significant abuse—whether that be within a single fight or over his whole career, which is currently on a 13-fight losing streak that began at the conclusion of Howley’s reportage.

This March, before the 13th of those 13 losses, the promoters of Caged Aggression 15 filmed a trailer featuring Huffman and his opponent, trash-talking, theoretically. The promotion’s attempt to stir up bad blood falls hilariously flat thanks to Huffman’s sleepy tone, his appreciation for fighting itself winning out over disrespect for any individual opponent. As a result, the video looks perilously close to a parody produced by a sketch comedy show:

Huffman lost the fight on a split judges’ decision—it was, indeed, fifteen minutes of just bangin’—and if Thrown weren’t written that wouldn’t feel like such a tragedy. The saving grace is that Thrown is so much more cinematic than some grainy YouTube videos, the best possible way to distill Huffman’s unlikely, beautiful career.