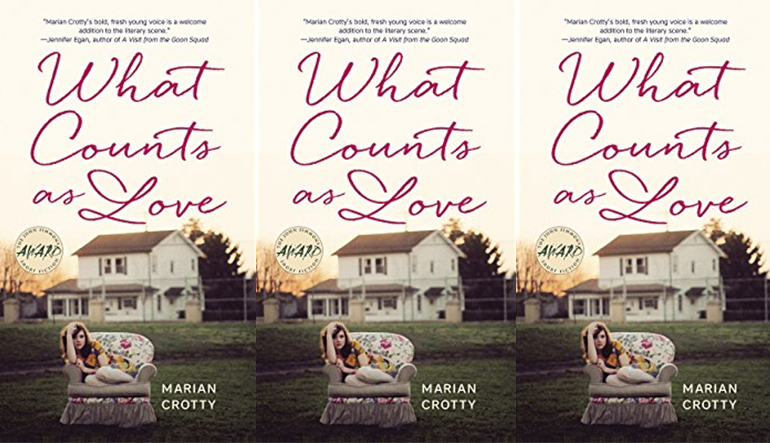 Marian Crotty’s superb short story collection, What Counts as Love, won the 2017 John Simmons Short Fiction Award, judged by Andre Dubus III. Crotty’s voice is quiet and yet insistent; the contemporary stories explore gender, sexuality, class, self-identity, and addiction. Each of these nine stories draws the reader in close, allowing us to get to know the main character, to become fully immersed in the character’s world. These characters—mostly young women— are striving to figure out a world that often seems incomprehensible and mean.

There are times when that meanness feels overwhelming. In “Common Application with Supplement,” a clever piece that uses the form of the college application, the narrator’s life is heavy with worry about her mother: “the way I had lived my whole life toggling between the fear that she would abandon me and the fear of being crushed by how much she needed me.” In the title story, Karleen has been abused by JT, her ex-husband, but blames herself, in part, for what happened: “The fact that her eyesight was probably damaged forever or that she had a jagged half-moon scar on her ribs was not just proof of JT’s cruelty, but also a testament to Karleen’s guilt—a memory of what the two of them had counted as love.” These characters are watchful and insightful, and Crotty allows us to access to their thoughts, one heartbreak at a time.

But each story, and each character, manages to fight through and come out the other side, a bit of hope surfacing both for the character and for the reader. Part of the way that Crotty manages to do this is to rely on her wicked sense of humor to provide moments of light. In “A Real Marriage,” Abigail, a college student, marries Amir, a man who has lost his travel visa and the INS is threatening to send him back to Morocco. Abigail is the one who proposes to Amir, and Crotty describes the rituals of their first Ramadan together, concluding: “Abigail liked the drama of living this secret life in the dark, but she could also see how being hungry for thirty days a year could get old.” Crotty manages, in one fell swoop, to both empathize and critique her characters. One senses that she doesn’t suffer fools gladly.

Almost every story in this collection considers the roles that men and women play in public and in private. In “The House Always Wins,” the lone story here narrated by a man, Crotty unpacks his insecurities as he reveals who he suspects he truly is:

His last girlfriend Lindsay, a woman he’d dated for five years and assumed he would marry, had often told him what a nice guy he was, and because she had rarely meant this as a compliment, he’d assumed it was true. Lately, though, he wondered if he was really just an asshole in waiting, a guy who wanted to disrespect women but hadn’t yet found the courage.

Here, too, Crotty’s humor is immediately followed by a deep and crushing insight into the nature of this character. With each story, we share Crotty’s interest in getting to know these characters, in trying to understand what makes each of them tick and, in turn, considering what this means about the role that gender plays in our own lives.

Addiction is also something that comes up again and again, as the characters struggle to find connection and happiness, often turning to drugs or food or sex to find solace. Almost every story could be called a coming-of-age tale, no matter the age of the protagonist. In “Kindness,” a mother pays her annual visit to her heroin-addicted daughter, and the story is told through the lenses of the daughter, the mother, and the estranged father. Each character’s emotional arc is revealing, and much of that is due to Crotty’s decision to tell this story through the different points-of-view. The form underscores the message that the trauma of addiction is far-reaching.

The stories take place in different locales, ranging from Arizona to North Carolina to Abu Dhabi. Details are well-chosen, to firmly lock us into a specific place. In “Crazy For You,” the story that starts the collection, Dina, the teenage first-person narrator, is spending time over the summer with Emily, the daughter of her mother’s employer: “In my neighborhood, the apartment buildings were all surrounded by pink gravel and sand lots where people threw beer bottles and cigarette butts, but her neighborhood was all green—even in July.” Dina’s world is expanding, and she sees how even the landscape reflects the differences in class.

And in “A New Life,” a particularly moving story in a collection full of them, Rebecca and Nathan move to Abu Dhabi after the death of their infant daughter, Hannah. Here, as in many of the stories, the natural world provides a reflection of the character’s interiority.  On the day that Hannah died, “It was November but warm out that weekend, and the breeze from the open windows filled the house with the smell of wet soil and dead leaves.” Later in the story, when Rebecca begins to see her husband in a more complicated light, the world reflects that back to her: “Beyond the latticed stone walls, stars scattered across the black sky, and the ocean crashed against the shore.”