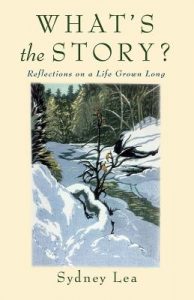 Now in his 70s, Vermont Poet Laureate and founder of New England Review Sydney Lea presents in this collection nearly seventy lyrical meditations in prose on what he calls the biggest surprise of his life, “turning into an elderly man.” As one might expect, loss is a central concern: loss of friends (mostly male), of old teachers and heroes (many from the world of Jazz), of favorite dogs, of his fully functioning youthful body. And yet this is a bracing book by an essentially lucky man, grateful—even amazed—to have survived intact so long, at ease in the natural world, surrounded by people he loves and is loved by, grieving without melancholy, facing death with as much curiosity as dread, glad to have outlived “the power released by strong, young, reckless men,” like his younger self and his friend Don when they “wrestled up great rocks” in the woods and sent them careening and crashing down hillsides: “All this was something you’d do if like those young men you knew you could live this way forever.”

Lea is certainly capable of moments—periods—of despondency, as when he feels both his own life and nature itself mired in ruts of self-repetition: “The predictability of the natural world seems dismally akin to my own rehashed responses.” But these bad patches are sporadic, over-ridden by the presence of his splendid wife (remembering an early girlfriend he writes, “my life could scarcely be better than it is with the woman of my later, better dreams”), his children and grandchildren, his place as an honored citizen of the state he loves. Above all what cheers him are moments of unforeseeable intensity that he was half-convinced were no longer possible for him. In one of my favorite sections, called “Recompense,” a bald eagle sails over Molly’s Falls Pond, and while he registers its obvious grace, his mind feels “crossed by intellectual letdown: there, I thought, goes one more wonder that in older age is a good deal less wondrous than once.” But this “inexcusable mopery” does not deserve what he sees next: “that other bird, up higher, which suddenly dwarfed the bald one.” It’s a golden eagle, extremely rare in Vermont. He’s stunned by this visitation: “Did some mysterious higher power feel I’d done some good?” He reviews his dutiful mourning for those he has loved, keeping his heart alive for them in “this late welter of crushing disappearances.” The privileged moment passes, “And yet to watch the golden eagle’s lordly drifting out of sight was unaccountably to hope that in my own small life I’d shown a kindness or two to people. How else, again, to explain this odd compensation.”

I close with a structural observation: the “chapters” of this strong and elegant book are actually never longer than two or three pages: big-poem length. Which makes reading it rhythmically satisfying, with its jazz-like riffs, in a rich, far from prosaic prose by man at the top of his game.

David Gullette was one of the first editors of Ploughshares, which was founded when both he and DeWitt Henry were teaching at Simmons College/Boston. He has published poetry, fiction, reviews, memoir, and translations from Italian and Spanish, plus three books about Nicaragua, where he spends part of every year as VP of Newton’s Sister City Project with San Juan del Sur, working on Appropriate Technology for Public Health. He is also an actor and playwright, and is currently Literary Director of the Poets’ Theatre. His adaptation for the stage of Seamus Heaney’s translation of Beowulf will be performed in December 2015 at the Cambridge Multicultural Arts Center, and his translation of Dario Fo’s play about Columbus and Isabella, The Queen and the Con Man,  will be staged on Columbus Day 2016.