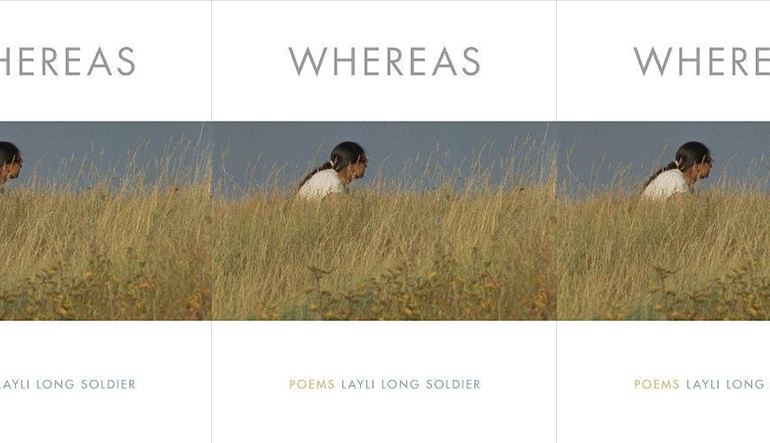 Few Americans seem to know much about the Indian Occupation of Alcatraz, and fewer still are acquainted with the Occupation’s “Proclamation,” a masterful document that deploys the language, diction, and vocabulary of unfair treaties and paternalism against the government that initiated those treaties. It stands as one of the great examples of rhetorical resistance in American writing. Layli Long Soldier’s Whereas reminds me of the Proclamation and other proclamatory documents authored by Indigenous writers on Alcatraz and since. But, even better, Whereas also happens to be one of the most innovative collections of poetry I’ve come across in a long time.

In 2009, the United States congress officially “apologized” to Native Americans, by way of a congressional joint resolution, acknowledging “a long history of official depredations and ill-conceived policies by the Federal Government regarding Indian tribes.” The resolution employs the term whereas almost poetically, as both anaphora and volta, to enumerate a litany of statements, claims, and promises. Each whereas pushes the text along, giving it an incantatory quality. Long Soldier has issues, though, with whereas, and one of the aims of her work is to deconstruct that word. In fact, whereas functions as a kind of millstone for the book. Long Soldier grinds away at the term’s legal/contrary/proclamatory elements, stripping away both its denotative and connotative sense of authority, as in this powerful poem:

The elisions do a lot of work here. On one hand, they force the reader to participate in the authorship of federal documents about Native peoples while also implicating us in the colonial project. On the other hand, the blanks reinforce the emptiness of apologies, treaty speak, and so-called “official” documents. Perhaps most importantly, removing a concept from the apology allows the poet to protect it, to “cordon it / to safety away / from national re- / solution the threat / of re-/ ductive [thinking].”

Then, a few pages later, Long Soldier reassembles the missing words into a new “poem” in which the previously redacted concepts are free of legal jargon and at home with each other:

As floating signifiers, these ideas carry different semiotic weight. Buried within legalese they are coopted into the discourse of colonialism. But here, as stand-alone words in a poem, they fly like flags.

Long Soldier’s concern with whereas is akin to Solmaz Sharif’s in her powerful poem, “Look.” Both poets interrogate beau acratic terminology, ultimately performing a poetic intervention on the vague, subject-free obfuscations that have come to characterize official governmental language.

What is especially compelling about Long Soldier is that she not only undermines language, she undermines form as well. Elsewhere, I have written about the importance of “compositional resistance” for Native poets. By this, I refer to how a poet composes her poem, the form it takes, how it looks on the page, how its typography expresses itself. Whereas is a masterful example of compositional resistance. Poems appear in squares, in columns, with blank spaces, in prose, in fragments, lineated, stripped down, oddly spaced, left justified, with shrinking fonts, huge spacings, both thick and dotted lines, and poems that read both vertically and horizontally. Almost no poem looks like another. Also like Sharif, Long Soldier sutures found language with her own lyrically stark diction, making poems that are amalgams of poetry and proclamation. Sometimes it is impossible to tell where the treaty ends and the poem begins.

Some readers may find elements of these poems too experimental or too difficult or perhaps even too political. And, to be sure, some pieces are more fully realized than others, but I’m okay with that, and I’m betting Long Soldier is as well. Whereas is an ambitious, ground breaking book. The world needs more of those.