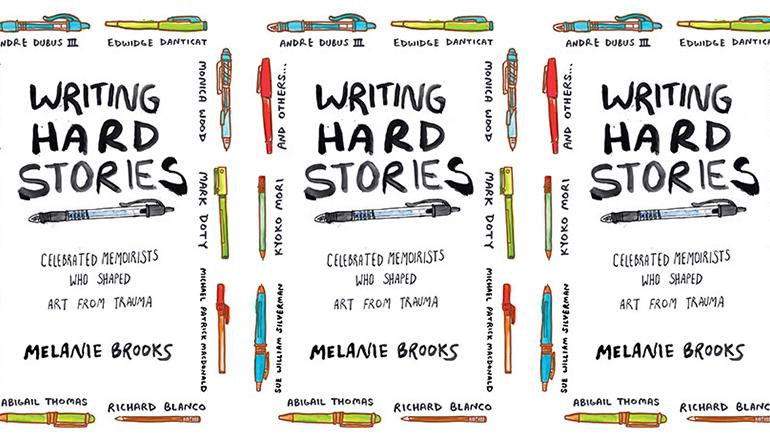 Designed to assist writers of all levels and abilities on their own difficult journeys to shape “hard life into beautiful art,” Brooks’ endeavor, which she began while completing her MFA at Stonecoast, is a gift. A gift of connection through conversation—eighteen of them to be exact—which proves that as solitary the endeavor of capturing our memories and surviving our stories, we are actually in very good company.

And that esteemed company isn’t restricted to the eighteen authors Brooks traveled to meet with and interview. Her research lead her to conferences like the Miami Book Fair, populated by well-known and respected writers like Sven Birkerts, Sandra Cisneros, Nick Flynn, Amy Hempel, and Joyce Carol Oates, as well as the annual Association of Writers and Writing Programs (AWP), where she captured insight from master memoir writers, like Mary Karr.

Throughout her book, Brooks, both writer and professor, considers her observations and questions in the warm light shone by other artists, citing lines of poetry by Adrienne Rich and quotes from C.S. Lewis. She fully immerses herself in physical journeys to uncover the struggle of the emotional and psychological miles we must log in order to come to terms with the narrative weight of our memories so that we might uncover, rediscover, and reclaim whatever or whomever we’ve lost.

Sharply written, these intimate and insightful exchanges dispel the myth that perhaps we all, writers or not, have come to believe about our own narratives, our own lives: “The worst story that we can tell ourselves is that we are alone.”

Consider Richard Blanco’s candid admission, captured by Brooks in a conversation about why, or better, how we manage to write our stories when we feel isolated, or silenced by our inner and unforgiving critic: “The greatest compliment anybody can tell me is ‘Your book made me think of a time when I . . . fill in the blank.’” Encouraging words as we all approach the New Year and resolve to return to our desks, no matter how overwhelming such resolutions feel. Though we surely sit in solitude, we are far from alone.

Brooks lingers on this idea of connection, which too often feels heartbreakingly elusive; particularly when we set out to mine our emotional landscape, hoping to strike gold, find what we’re looking for:

My mind travels back to Blanco’s inaugural poem and its final words, uniting all of us “under one sky.” How he speaks of hope as “a new constellation waiting for us to map it, waiting for us to name it—together.” I hear echoes of those themes now in his last words to me. “At the end of all this, why we endeavor collectively to write a book or paint a canvas or write a symphony or what not, is to understand who we are as human beings, and it’s that shared knowledge that somehow helps us to survive.”

For writers struggling with the next step of their journeys, Brooks’ work is a signpost showing them the way, urging them onward, offering companionship, and ultimately proving that the destination is already well within sight, even if they can’t yet see it. Share your stories, she says, help each other survive.

Amanda Forbes Silva received her MFA from Vermont College of Fine Arts in 2012. Since then, her work has been published in bioStories (later anthologized in bioStories’ Mothers and Other Creatures), Empty Sink, Emrys Journal, The Riding Light Review, Silver Birch Press, and Vine Leaves Literary Journal (later anthologized in The Best of Vine Leaves Literary Journal 2012). Interested readers are invited to check out her website and portfolio at www.amandafsilva.com