Home
»
Book Reviews
»
Fiction
»
Review: YOU TOO CAN HAVE A BODY LIKE MINE by Alexandra Kleeman 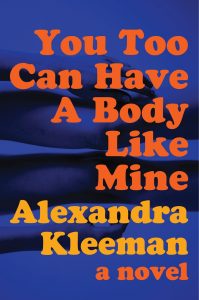 Seeming unmoored from both tangible responsibility and abstract constructs, like Mersualt in Camus’ The Stranger, “A”—the narrator of Alexandra Kleeman’s debut novel You Too Can Have a Body Like Mine—drifts purposelessly through her days. The house she lives in could be anywhere. All of her shopping is done at a single chain of stores, Wally Supermarkets—the sole differentiator between locations being the placement and inclusion of the garden centers. She describes her proofreading job where she explicitly is instructed to avoid any inclination to derive meaning from the texts, saying:

Although proofreader implies reading, what was expected of me was somewhat less: see that everything was punctuated, see that words were in a sensical place, but avoid trying to make sense of them—meaning was an obstacle to efficient proofing that my supervisors hoped I would avoid.

You Too Can Have a Body Like Mine sits within the tradition of mid-century existentialist literature, with an emphasis on the banal and the absurd which is rendered through Kleeman’s vivid, phenomenological descriptions of her own embodiedness. Eating an orange, having sex, and applying make-up are all drawn in exceptional detail—not as mere acts, underwritten by a grounded and definitive subject, but with a sense of overwhelming physicality that make the everyday profoundly foreign and risk subsuming the narrator herself.

The ooze of the peel burned at the edges of my lips as I bit in. A bitter, oily orange film slicked my lips and teeth. There were little grains of something sliding in the oil and I bit harder. I tongued the flaps of rind, dry as felt, and tore them from the flesh with my teeth. I bit into the sweet wedges, and the wound filled with juice around my lips. As I worked my tongue farther in, I felt the tips of seeds near the center.

However, before hastily labeling You Too Can Have a Body Like Mine as “existentialist,” it is necessary to clarify a term that has been both abused and derided. For Kleeman, as for the mid-century French existentialists who worked in fiction, existentialism isn’t merely anxious or contemplative. Nor is “existentialist” merely a narrative that deals with “ultimate issues.” Existentialism is a symptom of modernity itself. Free from the constructs of religion, and unmoored from the Enlightenment’s belief in progress, subjectivity itself is brought into question. The bare facts of existing overwhelm and subsume the thinking subject who provides order and unity to the world. In Sartre’s famous formulation, “existence precedes essence.” Throughout the narrative, A’s sense of self is threatened at every juncture. In describing her roommate (who is simply called B) she says:

“B and I were both petite, pale, and prone to sunburn. We had dark hair, pointy chins, and skinny wrists; we wore size six shoes. If you reduced each of us to a list of adjectives, we’d come out nearly equivalent.”

Similar to Camus’ Meursault in The Stranger, or Sartre’s Antoine Roquentin in Nausea, the sheer experience of existence threatens A. The tension in the narrative is thus not external, but rather the fight for her subjectivity—her power to exert meaning against a seemingly endless cascade of meaninglessness.

Where You Too Can Have a Body Like Mine breaks new ground is when it ventures into more fragmented, post-modern tropes, in the vein of Chuck Palahniuk or David Foster Wallace. For Kleeman’s narrator, the threat to selfhood is not simply from her ever-present, but always remote body, but also from the television screen. Television commercials for food and make-up all seek to sell products that will interact with her skin, her vital organs, her teeth and viscera. Thoughts are interrupted and fragmented from the barrage of advertisements designed to intervene, to alter or edit her physicality. Face masks peel off to reveal not just a younger version of oneself, but an entirely new one that displaces her already tenuous concept of a unified, cohesive self at every turn.

Some of this might sound excessively gendered—obvious in it’s statement about the relationship that people, in particular women, have to their bodies, to beauty products and the male gaze, but Kleeman’s prose is at every turn careful to avoid limiting itself to anything less than the human experience. Her cutting prose places You Too Can Have a Body Like Mine inside of a larger tradition that supersedes gender, and ensures that the novel takes aim at the universal alienation that characterizes what it is to be alive in the 21st century.

James H. Hibbard is a graduate of the University of California, Santa Cruz and did Ph.D work in 20th Century philosophy at DePaul University—where he published on German Phenomenology. He is a former professional cyclist and recently completed the manuscript of his first novel. He currently teaches English at San Jose State University.

Tags:Alexandra Kleeman, Antoine Roquentin, Camus, debut novel, female protagonist, Meursault, Nausea, Sartre, The Stranger, You Too Can Have a Body Like Mine