Home
»
Reading
»
Revolutionary Road and Doing What You Love 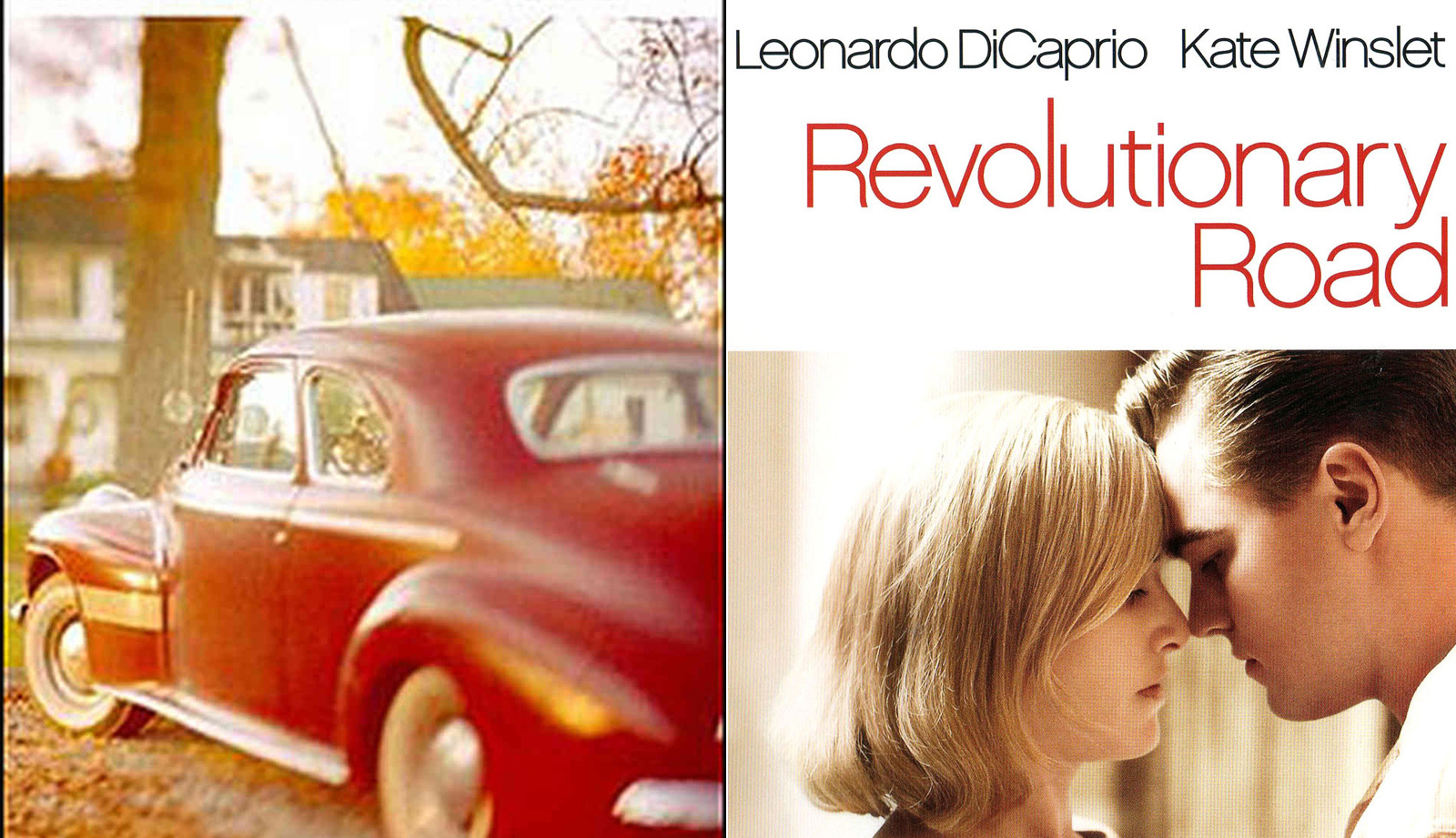 One recent Saturday, my wife drove with my daughter fifty miles west of our house, into the Hill Country around Austin, to take measurements for a porch that her grandmother is planning to add to her house. They had burgers, and then my wife pulled out her tape measure while my daughter played with her grandmother’s dog. When they came home, my wife went straight to her computer to start working on the AutoCAD drawings of the porch. That didn’t take long, so after about an hour she went back to a tricky design problem that had been nagging her in a different house, one she was designing for a couple of old friends in Georgetown, Texas. That problem was harder to resolve; it was still bothering her on Sunday morning, when she moved from bed to the kitchen for coffee and then, immediately, back to her computer, where she stayed all day. At 6:30 or so, I realized that only supper would pull her away from her work, so I fixed some cauliflower pasta and brought her a glass of wine, and I was able to coax her to the couch for a couple of hours of TV before bed.

This was side work; she does a lot of that for friends and family, some of which she gets paid for and some of which she doesn’t. During the week (and some weekends, too), she does the same thing—for pay, obviously—for a company in San Antonio. She works remotely, from the sunroom of our house, a bright space with a tile floor where she’s set up an office with a funky couch. Her work desk, with two computer screens, sits next to a big window that looks onto the stone patio of our backyard, overlooking a fountain and a flowering oleander.

Sometimes I’m jealous that my wife gets to work from home, like when she posts photos in the middle of the day of a squirrel playing on the oak tree behind the house, for example, or when she texts me about foxes running across our lawn. Who wouldn’t be jealous of that? But I’m more jealous of the distracted look she had on her face while working at her computer that weekend. I remember feeling like that when I was writing my dissertation: some bit of reasoning would be just out of my reach and I knew I could just sit at my computer and work until my idea would become clear and orderly. I remember how that process could eat whole afternoons, evenings, and nights, how one problem could define a week or even two or three.

In these moments, my wife is in the thrall of what 1843 and Economist writer Ryan Avent recently called flow, “the process of losing oneself in a puzzle with a solution on which other people depend.” The subject of Avent’s essay is the tendency of modern work to fill so much of our lives, to make “permanent use of valuable cognitive space,” to “choose odd hours to pace through our thoughts,” and to “colonize our personal relationships.” With smartphones, email notifications, and constant internet access, he says that work “becomes our lives if we are not careful.”

But this isn’t necessarily a problem, Avent suggests, because work also provides the possibility of flow. Our work colonizes our lives because we let it, and we let it because we like it. “Top professionals,” he writes, “are the master craftsmen of the age, shaping high quality, bespoke products from beginning to end. We design, fashion, smooth and improve, filing rough edges and polishing the words, the numbers, the code or whatever is our chosen material.” Avent says his work—as a writer and editor—is fun, and there are definitely times my wife would agree.

Last month in New Republic, Miya Tokumitsu and Joeri Mol tackled the same phenomenon and came to a different conclusion. For them, work’s expansion through our phones and into every part of our lives is a sort of sunny nightmare. In fact, the collapse of the personal into the professional is a two-fold trap: we have to clean up our personal lives, eliminating from our social media feeds anything that makes us seem unproductive; at the same time, we forfeit our claims to the benefits of professional life. If our time is so cheap that we’ll work at all hours, after all, then what leverage do we have to ask for higher wages or greater job security?

Reading both essays, I thought of Richard Yates’ 1961 novel Revolutionary Road. That book is “about” a lot: marriage, gendered expectations, parenthood. But it’s also about the nature of work and, as such, it anticipates the counterpoint Avent, Tokumitsu, and Mol trace. As the novel opens, its protagonist, Frank Wheeler, is in his seventh year in the Sales Promotion department at Knox Business Machines, an early computer company. He says he hates the job. We learn that he took it after college, when his wife, April, got pregnant. Two arty-literary types, Frank and April had vague plans about going to Paris after graduation, where Frank could find his true calling and April could act (or do something else arty or literary). With the news of April’s pregnancy, Frank changed course, seeking the dullest job possible. “I want something that can’t possibly touch me,” he tells a representative from his college’s career office. “I want to go into that kind of place and say, Look. You can have my body and my nice college-boy smile for so many hours a day, in exchange for so many dollars, and beyond that we’ll leave each other strictly alone. Get the picture?” Predictably, as the novel opens, neither he nor April have done any great creative work in the intervening years—while pretending to be above their suburban neighbors, they live lives that are identical to them.

The conflict starts when Frank is offered a promotion around the same time April resurrects their Paris plan. Enmeshed now in the world of business lunches and dinner parties, Frank wages a devastating and self-destroying campaign to change her mind.

Reading Revolutionary Road for the first time, I took away from it what I think are two standard readings: first, that Frank’s shying away from the Paris dream is a betrayal of his wife, who tells him over and over that she needs to escape from their suburban life; and, second, that it’s also a form of personal cowardice, a betrayal of himself. Reading it again, the first lesson holds up—Frank’s mistreatment and manipulation of his wife is still jarring. In particular, a scene in which Frank convinces April that her desire to flee for Paris stems from unresolved issues from her childhood, and that she should see a psychiatrist to clear those up, is a textbook case of what we now call gaslighting.

But in light of Avent’s and Tokumitsu’s essays, I’m more sympathetic to the pull Frank feels from his routine. The problem isn’t Frank’s job—the problem is that Frank buys into what Tokumitsu calls elsewhere the “do what you love” delusion. Frank believes, as Steve Jobs put it in 2005, that “the only way to be satisfied is to do what you believe is great work.” This is the modern American mantra, Tokumitsu says, and it divides work into “two opposing classes: that which is lovable (creative, intellectual, socially prestigious) and that which is not (repetitive, unintellectual, undistinguished).” Frank’s job fits in the second category, and through the novel we watch that distinction eat away at him.

But Yates lets us know early on that while Frank might not love what he does, he’s good at it, and some part of him likes it. Frank moves expertly through his office, jokes with his coworkers, and puts together sales brochures that catch his superiors’ attention. And Yates’ descriptions of Frank’s work are clear and detailed, reflecting Wheeler’s competence. But Frank is sure he deserves more. And though he’s not sure what that more looks like, he is sure that it can be found by living a life like Ernest Hemingway’s—or at least one more interesting than the life he’s settled into.

Tokumitsu argues that one danger of the “do what you love” worldview is that it dehumanizes those who don’t have interesting or inspiring careers. She writes:

If we believe that working as a Silicon Valley entrepreneur or a museum publicist or think-tank acolyte is essential to being true to ourselves—in fact, to loving ourselves—what do we believe about the inner lives and hopes of those who clean hotel rooms and stock shelves at big-box stores? The answer is: nothing.

That’s precisely Frank’s problem. The root of his tragedy isn’t his choice of suburbia over bohemian Paris; it’s his inability to find meaning in the life that his work affords him. We can’t all have jobs like my wife’s or Ryan Avent’s, jobs that fulfill us so completely we’re willing to do them all weekend, sometimes for free. But Tokumitsu reminds us that isn’t necessarily a tragedy. On the other hand, Frank Wheeler’s example in Revolutionary Road shows that defining ourselves too fully by our work can be.