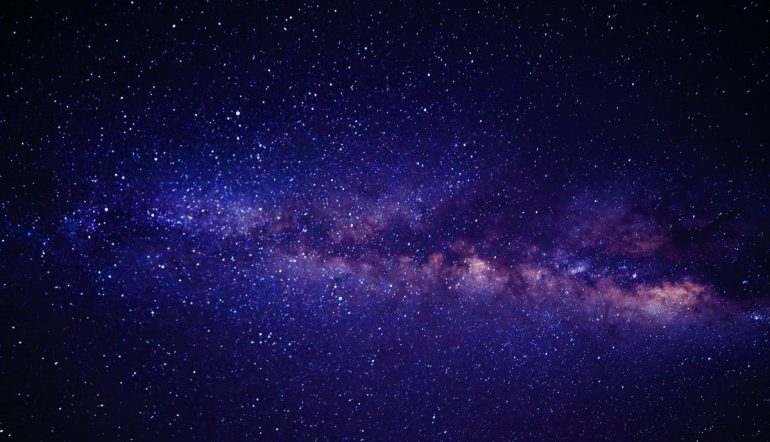 As a child of the ’80s, I was keenly aware of that vast region of “somewhere else” called space, and the astronauts who donned special outfits to venture into it. This hyper-awareness was in part due to the famed Sally Ride, the youngest and first female astronaut to journey into space in 1983. In my memory I seemed to be getting the message from all sides that I could now, as a girl, be anything I wanted–as long as I wanted to fly into space. But all I knew about space was that it was off to the left or right of earth and that it was vast. And that it terrified me.

When I was younger I would often lie in my twin bed, my sister asleep in her bed across our small room, and imagine “the universe.” It is a practice others have told me they also engaged in, so I am certain the impulse to test the world’s boundaries in this imaginative way serves a particular need in young people. My test usually began as a black sky peppered with stars and milky swirls, and I would eventually push past that layer of stars into someplace behind the blackness, and then behind that blackness, until it was too much and I couldn’t conceive of it anymore.

Poems seemed then, and still do seem, a perfect solution to the terror of nothingness. They took the raw, floating material in my small head and ordered it a bit. Besides, I was in love with terms like “the Milky Way,” and even felt a certain bodily satisfaction at the name “Sally Ride,” which conjured a 1950s girl-gang leader mixed with the bonny lasses of yesteryear. The simple “Sally” paired with the command to “ride” suggested to me she was riding off into space on a horse.

I even remember all the renderings of her, drawings in books and on worksheets I completed in grade school, a great posed photo in her NASA jumpsuit with a model rocket beside her. But in my favorite image she looks totally unposed, her jumpsuit just a little unzipped, her hair wild and her nose crinkled. I could imagine this woman riding her horse into space for sure.

During this same period of Sally-mania, I was compulsively viewing the now cult classic movie The NeverEnding Story with my siblings, a film which featured a new and truly terrifying take on what already scared me to death–The Nothing. The Nothing, as darkness and void, employed a messenger in the form of a snarling wolf whose warnings of impending nothingness were mocking and vicious.

Do you remember how they floated off into space when The Nothing finally got them, clinging to chunks of cold rock, orbiting each other, reaching out their hands in futility, confused, scared–it was Laika for the ’80s child, only The NeverEnding Story wasn’t real, and tragically, Laika was.

The story of Laika, the first dog sent into space by the former Soviet Union in 1957 at the beginning of the Space Race, captured an earlier group of children’s imaginations regarding space, although in a much different way. A stray chosen for the task, Laika was used to test the limits of space travel and was never meant to survive the ordeal. I have trouble even writing about her, and know from my father some children had trouble even thinking about her as it was happening.

In Alan Shapiro’s beautiful poem “Space Dog,” first published in The Threepenny Review in 2004, he asks what every child, staring at their ceiling late into the night, afraid of space and nothingness, is trying to reassure themselves of, in one way or another:

Surely they’ll come to get me.

Surely they didn’t love me

all that time for this.

This is Bridget’s second post for Get Behind the Plough.