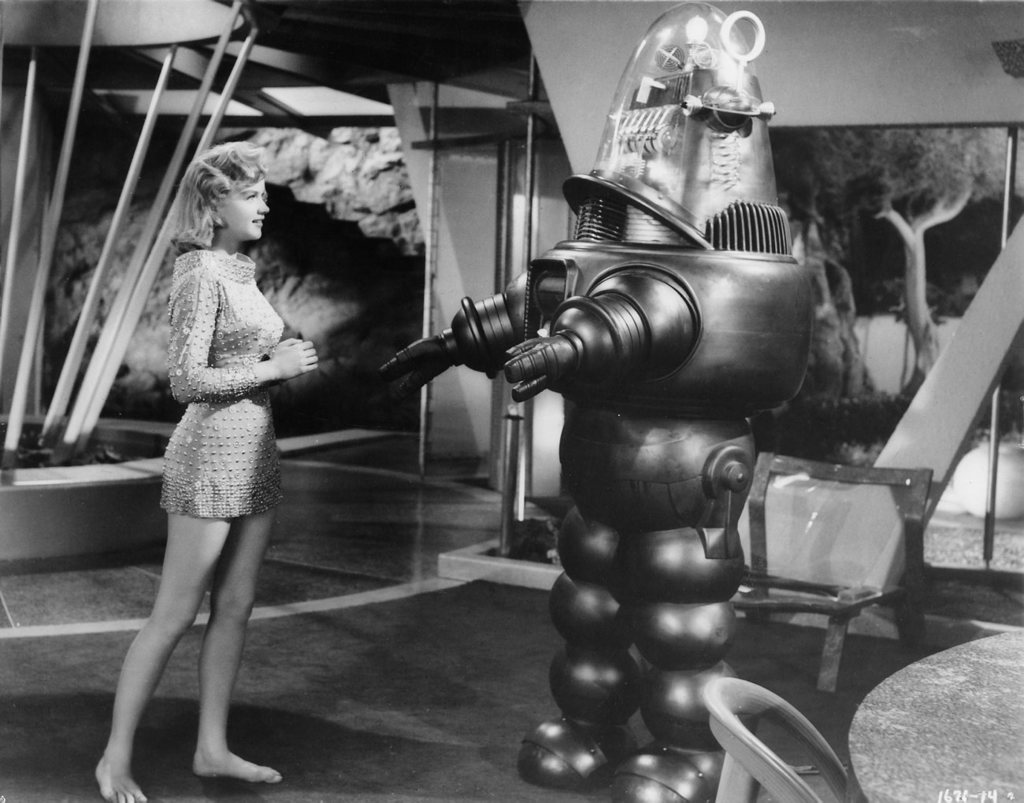 The machinations made publicly available in our Age of Information might, in the most general sense, reify one’s value of a poem’s figurative thinking, the language that seems so particular to a human mind. For this reason, poets are grappling with their anxieties over the future of artificial intelligence; with their awe at technological innovation; with their fumbling through the knowledge that, in pockets and backpacks, one carries with them a computer’s long-term memory—infallible and encyclopedic, unlike ours. We often submit to this external memory, and we comparatively acknowledge what information we carry in our bodies. Robert Pinsky’s “The Robots,” from his latest collection At the Foundling Hospital (2016), defers to the object-making superiority of the robots in its fifth and final stanza: “Their exquisite sensors will comprehend our very dust, / And re-create the best and the worst of us, as though in art.” Reversed, we are the objects to be made. Yet leading to this final prediction are several attempts to describe those machines as animalistic, biological—“When they choose to take material form they will resemble / Dragonflies, not machines”—and the ultimate failure of this “resembling” startles the poem into deference, into acceptance.

Lauded as the great rationalist-poet of the late twentieth century, Pinsky’s career has been shaped by his attentive meditation on technological instruments and the human body. He wrote the videogame Mindwheel, released in 1984; he founded the Favorite Poem Project, a digital archive of Americans reading their favorite poems; he’s recorded albums of his poems read aloud and accompanied by Laurence Hobgood, a contemporary jazz pianist. The medium of poetry, to briefly paraphrase the example of his 1998 handbook The Sounds of Poetry, is a column of breath in the body made into words and then, finally, made into meaning. Poems, then, operate like little machines; a system or arrangement of words that communicate both bodily and semantic knowledge. “The Robots,” and much of Pinsky’s work as a poet, is intermediary, a transference between artifice and experience: “Like the chorus of Greek drama they will speak / As many, but in the first person singular.” Pinsky’s robots, like the masked chorus of Greek drama, can only resemble humans; in their resembling, when they “dance the forgotten,” these robots represent a human consciousness at work, making sense of experience, always trying and always failing to systematize memory.

If Pinsky’s poem predicts the robots’ masterful artistry through his own well-wrought belief in human reason, his contemporary Jorie Graham’s Fast (2017) formally enacts an artificial mind at work, like a human, cultivated by and conjoined with the metaphors of the poet, like a technology. The tense overlap of machine and human in part accounts for Graham’s particular syntax, syncopated and often phrase-driven. The collection’s title poem begins with a mandate, an irresolvable either/or. “Fast,” the title of the poem, then the first stanza: “or starve. Too much. Or not enough. Or. Nothing else?” This poem, immediately groping to arrive at an answer to this either/or, soon turns to Graham’s bot for guidance:

Will we survive I ask the bot. No. To download bot be
swift—you are too backward, too despotic—to load greatly enlarge
the cycle of labor—to load abhor labor—move to the
periphery, of your body, your city, your planet—to load, degrade, immiserate,
be your own deep sleep

Neither the vatic bot nor the poet clarifies which “we” won’t survive—that is, if “we” excludes the bot—and the following list of “disclaimers” warns against the bot’s growing emulation of human qualities: “Disclaimer: bot uses a growing database of all your conversations / to learn how to talk with you.” Unlike Pinsky’s robots, rhetorically staid in his future tense, Graham’s bot is almost-living, here in front of you as you experience reading the poem—the dangers of this technology all the more figuratively consequential.

The bot of “Fast” poses a threat to privacy and to privations, to our inner-lives and thus our figurative thinking, an extension of the robot-induced anxiety of being overpowered, of physical danger. A “Disclaimer” continues: “If some of you / are also bots, bot can’t tell. Disclaimer: / you have no secret memories.” What happens when we are classified in the encyclopedia of artificial memory—which parts of ourselves still remain intact, our own? If the robots learn by resembling humans, Graham’s bot also learns these cruel invasions from humans. Whether or not one learns to trust automated minds, whether or not one believes their private bot-companion “knows the secrets of the Universe,” human life is impelled forward. “Fast” wonders if this forward movement drives us to destruction or, through reason and progress, to newer and more advanced conceptions of consciousness.

Asking a different version of this question, Franny Choi’s Soft Science (2019) is shaped by a sequence of poems that structurally enact the assembling of a cyborg’s mind and body. Readers first encounter Choi’s second collection—widely-praised for its examination of race, gender, and sexuality as shaping that process of assemblage—through a “Glossary of Terms,” which includes the meanings, antonyms, and origins of “Star,” “Ghost,” “Mouth,” and “Sea.” Before one enters the rest of the book, readers must first recognize and redefine their own denotative impulses, must learn that here a star is a “bright, ancient wound I follow home.” This glossary asks us to remember that assembling meaning throughout this book will be a process that is deliberate and contextualized in the poem’s own specific process of making. Our “Glossary of Terms” is followed by a figurative “Turing Test,” an evaluation of a machine’s ability to imitate human behavior, and subsequent iterations of the Turing Test begin each section of Soft Science—the perpetual requisite for Choi’s cyborg to reassert human qualities to an indeterminate cyborg-authority.

Unlike Pinsky, who imagines his flock of robots in the hyperbolic future, and unlike Graham, whose bot is not only distinct from the human but also an intelligence with whom the poet can interact, Choi’s cyborg is the voice communicating many of these poems. The first “Turing Test” introduces itself, “// this is a test to determine if you have consciousness,” a determining authority imposed onto the poem; the cyborg answers, “/ i learned to speak / from puppets & smoke.” How can one prove their own humanity, for what possible reason should one need to affirm their humanity, and who feels holy enough to ask for that affirmation? The cyborg, like the poem itself, is always in-process: through the paragraphs of prose poetry, with forward slashes to mark where a line may otherwise end, the cyborg maneuvers interrogations like “// do you believe you have consciousness” with a metaphorical tenderness, a vivifying of its manufactured but long-inhabited body. The cyborg responds to that final question, “sometimes / when the sidewalk / opens my knee / i think / please / please let me / remember this,” a sort of sideways answer. This perpetual desire and ultimate failure of memory is particularly human; for the cyborg, to have a human body is to experience a human body—just as a poem is experienced as a process—and one pays attention to what artifacts, customs, and ideologies are entrenched in that process.

Each of these poets deals, in some way, with the very real extremes of futurity, with tensile metaphors to project oneself into that futurity. Noah Warren’s “Automatic Pool Cleaner,” from his 2015 collection The Destroyer in the Glass, is not a poem that panics about robots and does not unyoke the pattern of his lineated sentences to approximate an artificial mind. Instead it lazily, with an almost impartial fatalism, watches a machine work the job it was designed to work: “Like the stubborn rover Spirit, it’s / insistent in collecting its units / of grime, if less scientific. Like a white ray / it cruises slowly through teal.” Only in that first, short phrase does Warren see the similarities of this machine to another machine, the Mars rover; over the next four stanzas, the pool cleaner is a “white ray,” a “flounder,” a “Labrador,” and, perhaps most importantly, it has rendered useless “the pool boy, whose dim ghost / imbues him with a comic eros / and just a nibble of pathos.” With the absence of another human, Warren’s poem observes automation as something idiosyncratic in each tiny robot; it notices that the machines, through the way they’ve been designed, are far from inhuman and appear to have personalities, which the poet admires.

Rather than anticipating the uprising of automatic pool cleaners, as Pinsky watches robots over his head like dragonflies, the temperament of Warren’s machine suggests to us that, in some cases, constraint leads to a degree of progress: “I too have been known / to ceaselessly pace a little cell.” Like the automatic pool cleaner, the poem asks, how can one manage or categorize everything that makes us animal all at once—is that even possible? The answer, for this poem, is to lay around in sandals, drink a summer beverage, and observe:

But their acquaintance sips icy coffee
in his latest attempt to fire
his forebrain to a lyre: some thing
he can hold and have, that returns
more life than it burns, a thing
gorgeous, worthless, and self-betraying.

We read the poem on the page and immediately recognize the forebrain has been lit to a lyre. Warren notes for us here that this poem is in-process, an experience of its own being made each time one reads these lines, organized in this particular way; like the pool cleaner, its automated movement doesn’t preclude the very patterns that make it human.

In 1944, in his introduction to The Wedge, William Carlos Williams famously compared poetry to a “machine made out of words” then continued, “Prose may carry a load of ill-defined matter like a ship. But poetry is the machine which drives it, pruned to a perfect economy. As in all machines, its movement is intrinsic, undulant, a physical more than a literary character.” The “pruning” mentioned here is one of linguistic scarcity, such a degree of precision in language that every word on the page is charged far beyond its denotative meaning. If artificial intelligence represents a sort of automated and critical mind, the formal gears of a poem operate to interrupt our anxiety of automation. Form itself is a way of thinking, of feeling, of embedding memory deep into the words on the page. Every time one hears a poem, experiences how a poem is made, we begin to understand how that tiny machine operates.