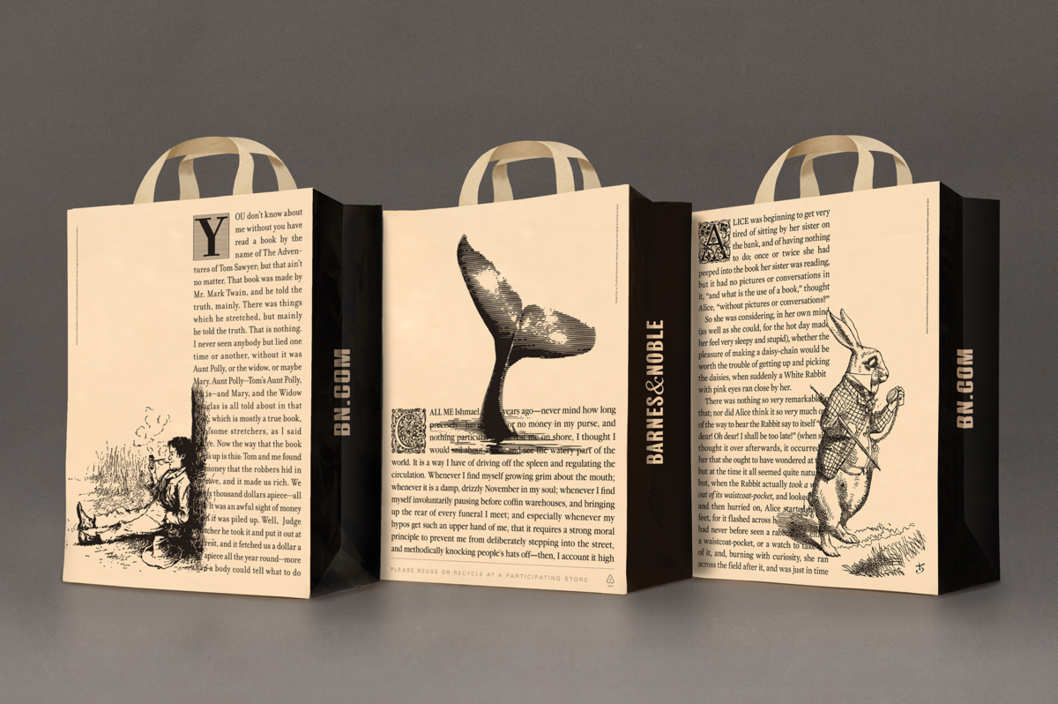 Book retailer Barnes & Noble recently released a new line of shopping bags in the hope of incentivizing in-store purchases. In an article at Bloomberg Business, Belinda Banks writes that the new bags “evoke an old-fashioned etching, with the words set in a serif font and forming an image evocative of the story. For The Wizard of Oz, for instance, the feet of the Wicked Witch of the East poke out from a house composed of text; for Moby Dick, a whale’s tail plunges into an ocean of letters.” The bags have already been publicly launched in New York and will soon appear in stores nationwide. The retailer reports that they distribute “more than ninety million bags per year,” making this no small effort.

The idea that we will buy based on who offers better packaging frankly strikes me as silly. The question of convenience seems far more responsible for growth in sales. These items no doubt contribute to a larger sense of brand, and a consumer’s ability and desire to identify with that brand is certainly crucial, but it seems unlikely to me the bags alone will mark any significant change for the bookseller.

Additionally, when a bookseller such as Barnes & Noble introduces more and more products that are not texts at all–Banks cites in her article the additions of craft beer kits and portable turntables–the question is very clearly raised for me: how transparent is the motivation behind this move to shopping bags that highlight books, things that at least appear to be an increasingly peripheral concern for the retailer? Just a few months ago I went looking for literary magazines in my nearby Barnes & Noble. Not only did I not find them, but I found additional displays of board games and coffee mugs.

Alex Shepard sums it all up quite nicely over at Melville House, writing that “Barnes & Noble hasn’t been particularly good at selling books for quite a while and they haven’t seemed particularly interested in it lately, either—to enter the floor space of a Barnes & Noble today is to be awash in books, yes, but also records, chocolates, CDs, cards, board games. These are high-margin items, but they emerged at a time when Barnes & Noble needed to get better at selling books; instead, they turned their back on them.”

Though it is true that the bags are visually quite appealing, it’s very hard to fathom them seriously helping, especially due to the fact that you only receive the bag after you’ve made your purchase–what is considered at best a fringe perk, a thoughtful afterthought. Shephard’s words about the bookseller are ringing true: “Barnes & Noble needed to get better at selling books; instead, they turned their back on them.”