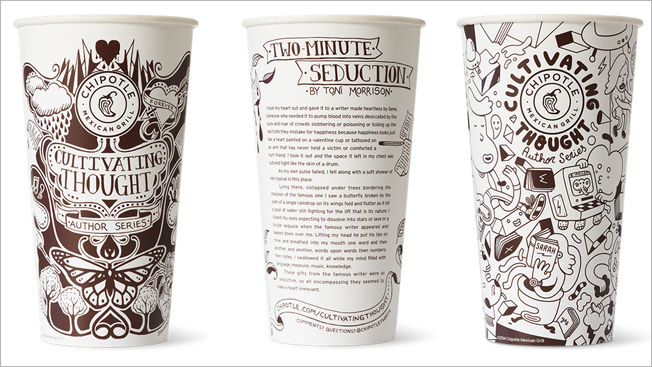 Restaurant chain Chipotle just announced plans to add to their recent “Cultivating Thought” series, including such writers as Jeffrey Eugenides, Amy Tan, and Neil Gaiman. The project’s promise is simple: great, short writing by these and other talented names–offered on burrito bags and soda cups. The prodigiously talented Jonathan Safran Foer came up with the idea for the series and partnered with the chain to set his vision to action.

The “Cultivating Thought” site is clean and features just one question at its center, which reads “Must a cup, or bag, suffer an existence that is limited to just one humble purpose, defined merely by its simple function?” The answer now seems to be “No,” as Chipotle is the first to offer such an inventive solution.

At Vanity Fair, Kia Makarechi gets word from new “Cultivating Thought” series contributor Julia Alvarez: “’I thought it was important as a Latina to add my voice to this series,’ [Alvarez] said. ‘So it’s not just our food being served at Chipotle, but also our arts which we all vitally need to nourish the spirit and open wide the heart.’ Alvarez’s story, ‘Two-Minute Spanglish con Mami,’ focuses on the immigrant experience, especially as it pertains to what Alvarez described as ‘the biggest, hugest challenge I faced when I came to this country: learning English.’” Makarechi notes “Alvarez also said she’s pleased to add a Latina voice to the series, an omission that attracted some criticism when Chipotle announced its first batch of authors in May of last year.”

I would be lying if I were to write that I feel nothing is risked in printing these pieces on soda cups and burrito bags. I wonder, even worry, about the obvious nature of these things as disposable. We are going to throw the bag away. When we do, are we making some statement about the writing, too? Perhaps not. But I begin to wonder why these pieces can’t appear as more permanent functions within the store, why their presence in the dining experience has to be ephemeral in this trash-fated way.

But there is another side to this, too: the literature is to-go. It is free to find its way back to the house, to the car, to be read and enjoyed outside the time spent eating that burrito.

So I think this is actually great work being done, and regardless of any possible reservations, the quality of the writing included in the series is uniformly—almost objectively, and of course unsurprisingly—excellent. If you’re not near a Chipotle location, you can head over here to read accompanying interviews about why these writers chose to partake in the “Cultivating Thought” series, as well as the short work included on the bags and cups.