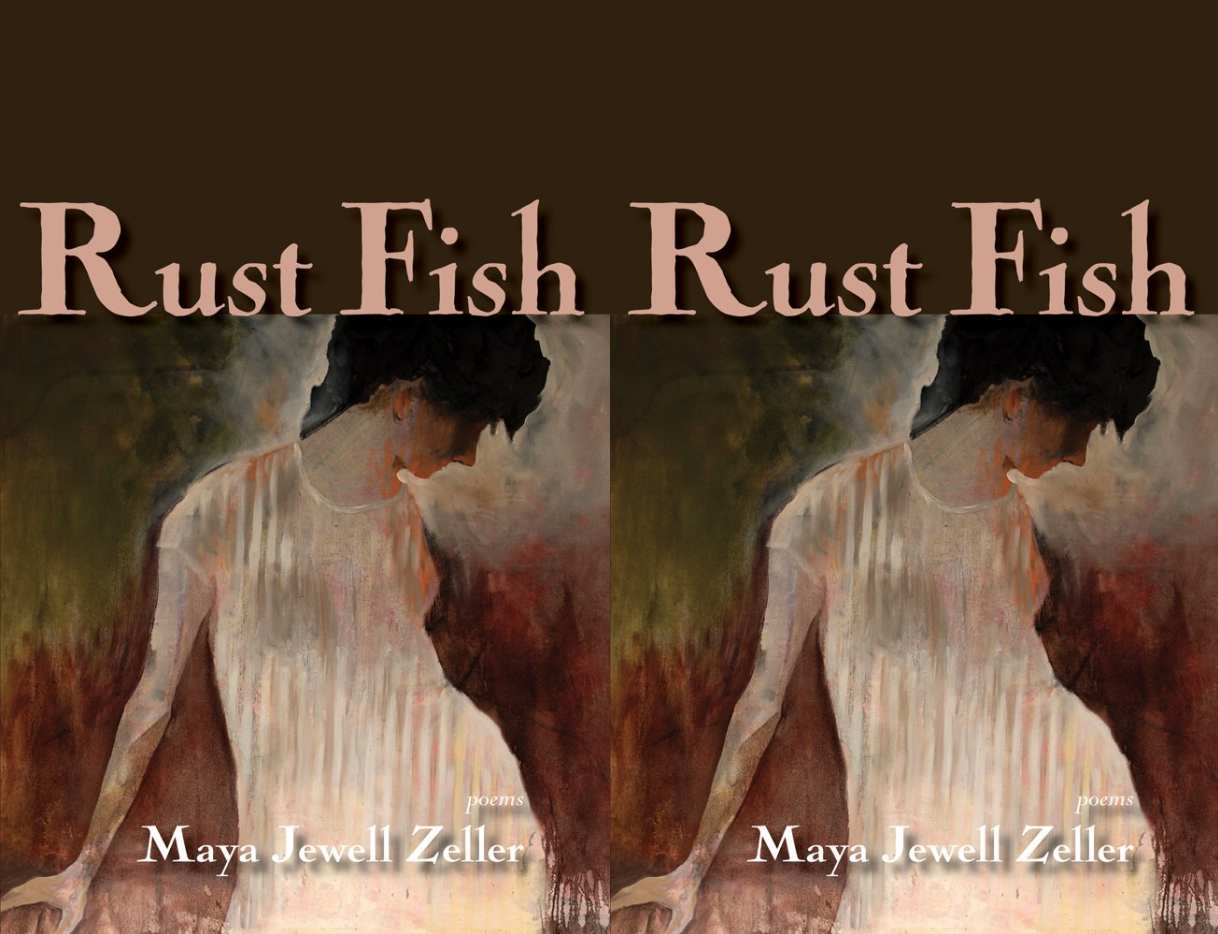 Maya Jewell Zeller’s bio tells us that she was “Born at home in the upstairs apartment of her parents’ gas station on the Oregon coast,” and this half-sentence provides exactly enough information to authenticate the stories at the core of Rust Fish, her first collection of poetry.Zeller finds a beautiful balance between the natural world of small town Oregon and the human world. As the collection progresses from the playful wonders—and impulsive violence—of childhood to the stability of adulthood, the speaker comes to understand herself through the organic realm with which she forms a close bond.

Through the first half of the book, Zeller recalls whole days spent hanging out with the sky, the way a normal girl might with her best friend, and ruminates on the secrets of a river.  In “Skunk Cabbage,” we meet her on the brink of womanhood, “staring at skunk / cabbage, rubbing / the stamen / glow / between fingers, / learning / its curve, / and ah!—the pulpy berries / fleshing / its core.”

She speaks to the plant, “Your spiked / flower / hardly knows // it’s own allure. Like / lemon cookie, like / hooded // clitoris.”  She too seems to hardly know her own allure as she explores her sexuality via amateur botany.

Zeller infuses her tales with minute and sometimes heartbreaking details, and she recalls her long-ago memories with definitive clarity.  In “Sibling Rivalry,” she tells of her brother drilling a hole through her Skipper doll’s chest and hanging it from her bedroom ceiling. She shares the details of her revenge like an old war flashback:

I mutilated Joe
the way a boy tortures beetles
or dismantles toy girls.
I can still remember
each tug against the thin, taut
elastic strings, his body making pings
and cracks, black plastic falling
from the shoulders, springs popping
where an arm had been, socket
gaping like a shocked jaw.

Rust Fish is divided into four sections, each anchored by poems of the same name that mature as the speaker matures, with a final Rust Fish poem rounding out the book.  In “The Rust Fish” (1), the rust fish “leap on their poles” and “rise / in long jelly arcs as if no metal / contains them, as if / they might spawn stars.”  By “The Rust Fish” (5), the rust fish “has had enough now. It’s time / you all go home; he’s tired / and needs some water.”

These later poems are more retrospective and mature, not necessarily in tone but in the speaker’s recognition of the impact she can have on the people and the world around her.  In “That Purple Were the Color of Our Skins,” she weighs the implications of bullying: “How tender our names are. / Children bruise them / all our young lives, / until they grow thick / with the ache.”

Zeller’s poems are sly, brutal, resilient, and wise.  I hung on every word and closed the book feeling like I’d lived a whole other life.