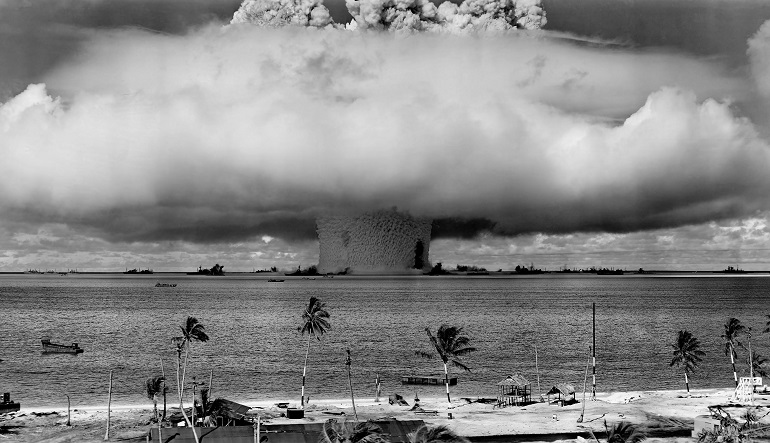 Open social media on any given morning, and the avalanche of news regarding climate change, neoliberal politics, the surveillance state, white supremacy in full swing, the patriarchy still well and alive, and the president’s latest tweet, is enough to convince anyone of an impending apocalypse. But here’s the thing: contemporary literature has me thinking that the apocalypse isn’t about to happen to us. Instead, it’s been happening for a very, very long time.

At least, this is what I read in Ruth Ozeki’s fiction. Her three novels, My Year of Meats (1998), All Over Creation (2003), and A Tale For the Time Being (2013) all revolve around the complex relationship between humans and their environment, through a transnational lens. Notably, Ozeki crystallizes the interpersonal conflicts, identity issues, and psychological developments of her characters around such themes as the use of GMOs and hormones in the agricultural and meat industries, and the shadow of the nuclear age we still live in.These narratives flip the conventional apocalyptic story on its head: the apocalypse happens on an almost-molecular level.

If “GMO” means “genetically modified organism,” it suggests we reconsider designating things “organisms” on the basis of genetics. What we’ve been told was the essential code of our very being, DNA, becomes something malleable, meaning, something terrifying. If something can be changed, then the immediate questions that emerge are ones about power: who can make the change? And why? What’s the purpose of making changes so fundamental to something that is not you? What are the unforeseen ramifications? All Over Creation has us confronting the responsibility of interfering with others, and this points to the tenuous boundaries between self and not-self. The main character comes back to Idaho to care for her aging parents, who are former potato farmers, and finds herself embroiled in the growing local controversy around GMOs and the ownership of seeds. The neoliberal state and the ensuing deregulation are part and parcel of the apocalyptic arc in this novel: if means of sustenance can be privatized in order to be altered and resold for a profit, where does it end? How may our own bodies be treated like GMOs by the powers that be?

The representation of the consequences of using hormones in food plays along similar lines. In My Year of Meats, the protagonist goes on an road trip across America to document the various ways meat is prepared for a Japanese TV show. On the way, the main character unearths evidence of illegal hormone use and repulsive treatments of animals. Hormones are indeed a “natural” thing, but their forcible injection into other living organisms raises, once again, questions of power and who wields it, as well as questions of transmission and contamination. What affects one organism can, in our interconnected world, affect thousands more. Who takes responsibility for the transmission?

Accountability and responsibility are at the heart of nuclear anxieties, too. In A Tale for the Time Being, a woman, Ruth, finds a journal, belonging to Nao, that has washed up on a beach. The journal is most likely part of the first wave of debris from the tsunami that struck Japan in 2011, causing nuclear accidents that turned the area around Fukushima into a post-apocalyptic wasteland. Nuclear fission and its aftermath spur the convergence of Ruth’s and Nao’s storylines, which, in turn, explore aspects of historical memory and social modes of belonging that are linked to the dread of the nuclear age—the kind of dread derived from an omnipresent albeit invisible threat that endangers both the self and the nation.

The etymological root of “apocalypse” points to the unveiling of some kind of truth, whose finality is such that it renders humanity and history obsolete. The apocalypse is the work of forces that transcend us. It puts us back into context. The word’s evolved to nowadays only take on deeply negative meanings: catastrophe, cataclysm. The end of all that was. Ozeki’s use of apocalyptic themes reaches back to that earlier definition in the sense that main characters are always concerned with finding out truth and grappling with it. And yet, the apocalypse in Ozeki’s novels has been cut down to size: it is no longer the final hand in a celestial game of poker, but something that happens on micro and macro levels, all around us, and, most importantly, within us.

Ozeki’s characters are very often outcasts. They’re biracial, transplants. They buck against norms. They’re marked by difference, suffer from it, learn from it, and never let it go once they’ve embraced it. This allows them to identify the ongoing apocalypse: they are the first ones hit. They don’t have the privilege of not seeing what’s truly happening. Instead, they’re the ones who must reckon with the aftermath of catastrophes and revelations.

A review of All Over Creation described Ozeki’s brand of apocalypse as “cheerful,” and it’s true: it’s not about the catastrophic, blockbuster-type brand of apocalypse, but rather about the ones that affect us in real time. It’s about not despairing when faced with the sheer magnitude of the structures that serve to maintain the apocalyptic state.

Tags:A Tale For the Time Being, All Over Creation, apocalypse, My Year of Meats, Ruth Ozeki