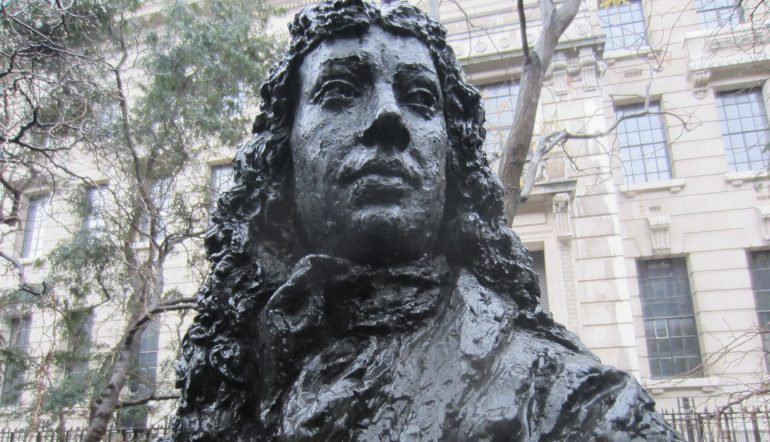 Meet our second new blogger from the Spring 2010 issue: Bridget Lowe. She recently became a “Discovery”/Boston Review winner, and has poetry you can read online in Boston Review and Nth Position.

I recently stumbled upon a used copy of Samuel Pepys’ Penny Merriments, Being a Collection of Chapbooks, full of Histories, Jests, Magic, Amorous Tales of Courtship, Marriage and Infidelity, Accounts of Rogues and Fools, together with Comments on the Times. This collection of seventeenth-century goodies, mostly broadside ballads, was selected from 115 tiny chapbooks the famous diarist and collector had labeled Penny merriments (referring to the cost of such fare) at the time of his death in 1703. The collection, selected and edited by Roger Thompson and published in 1977 by Columbia University Press, includes 30 of the original woodcut illustrations as well, these woodcuts being one of my favorite things about the book and the period that produced them.

Thompson’s full title is truly reflective of the range of topics these slim publications addressed, serving as sources of politics, history, news, music and humor for the “ordinary person” of the period. Thompson’s full title also mimics the verbose titles typical of the genre, such as this, one of my favorites from the book:

In addition to the astrological insights of Mr. Lilly (William Lilly, a superstar in his day), subject matter of these broadsides included everything from cuckoldry, divination, travel tales, and lost virginity (usually lamentable), to doctors of physick, the mad-men of Gotham, and Dr. Faustus–ultimately, the broadside ballad had something for everyone.

At times it seems that the broadside ballad was the animal left off the ark of the Renaissance, content to dawdle among the bushes, lazy and easily entertained. The verse is light and the woodcuts were crude.

But for me, the typical broadside is evocative in the way its literary superiors are evocative–and the woodcuts, in addition to being crude, are also delightful, hilarious, and touching–yes, the people are often rendered so poorly as to be comical or just appear grievously malformed, foreground and background are nonexistent, nothing is technically right–
and yet the woodcut of Tom Thumb riding on his horse, his face just a little round circle with three inkblots (two for eyes, one for nose or mouth, your choice),
a huge feathered plume on the top of his helmet as he looks proudly at his reader from the page, never fails to incite reverence and joy in me. As most writers know, sometimes technical skill just isn’t enough.

If you’re interested but can’t find a copy of Penny Merriments, or simply want a more expansive look at the abundant material, the University of California Santa Barbara has the free and amazing English Broadside Ballad Archive online at http://ebba.english.ucsb.edu. EBBA, in fact, began as an effort to archive the single largest grouping of 17th century broadside ballads–the Pepys Collection housed at Magdalene College, Cambridge.