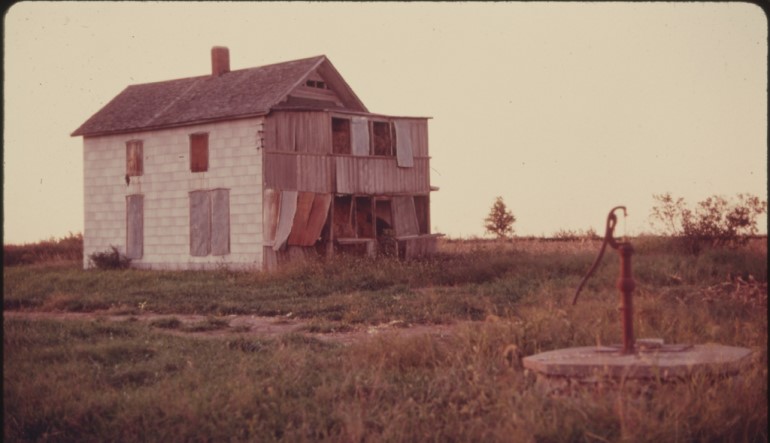 In The Poetics of Space, Gaston Bachelard wrote that “the house protects the dreamer, the house allows one to dream in peace.” The house is often used as a symbol of security in literature, and a ruined home can speak to what a given writer thinks we need protection from. Both the threats to security, and the emotional impact of a literary ruin shift with the writer and their cultural moment. Marilynne Robinson’s Housekeeping, for instance, depicts freedom and an embracing of the natural world in the breakdown of an ancestral home; the 2016 novel The Grip of It, by Jac Jemc, on the other hand, sees only terror in the destruction of a family’s sanctuary.

Housekeeping is surely one of the most exquisite ruined house novels in American literature. Ruthie and Lucille, two sisters who lose their mother to suicide as young children, grow up in their grandfather’s house in the fictional town of Fingerbone, Idaho. As they come of age under the nominal guardianship of their drifter aunt, Sylvie, the two sisters are torn apart by their growing needs for different kinds of security. While Ruthie needs protection from the social world and retreats into nature, her sister needs protection from social judgement and from a life of mere survival. Lucille tries to keep the physical house intact, but Ruthie watches the collapse of their home with ambivalence.

Transience is the central meditation of Housekeeping—its omnipresence, pain, and beauty—and sublime imagery is the bell that Robinson rings to call her readers to prayer. Robinson begins outdoors, drawing our attention to the mountains and lakes around Fingerbone. But rather than having us focus on the permanence of these things, she chooses to uproot the notion of landmarks, speaking instead of their changeability, of the “mountains as they must have been and the mountains as they are now.” Robinson makes the enormous lake of Fingerbone disappear and reappear in defiance of our understanding of the natural behaviors of large bodies of water:

Sometimes in the spring the old lake will return…A narrow pond would form in the orchard, water clear as air covering grass and black leaves and fallen branches, and on it, slight as an image in an eye, sky, clouds, trees, our hovering faces and our cold hands.

In the beginning, there is separation between the transience of these sublime natural spaces and the house.

As the book goes on, however, Robinson brings her visions of nature indoors. When a particularly wet winter floods Fingerbone, the lake comes into the home that Ruth and Lucille and Sylvie share. This is at once a rude reminder of the decay that will come to each human life, as well as a rare and beautiful sight: while the waters ruin floors and furniture, the girls’ every movement creates “an intricate system of small currents which rolled across the floorboards. Glyphs of crimped and plaited light swung across the walls and the ceiling.” Later, when Sylvie’s housekeeping habits cause dead leaves and bits of paper to collect in the corners of the house we find more of this beautiful sensory portraiture: “every time a door was opened anywhere in the house there was a sound from all corners of lifting and alighting.” These images of transience become the main aesthetic of the home.

Sylvie rejoices in these scenes of natural decay, in their invasion of a home built specifically to keep them out. Ruthie describes Sylvie’s preference for sitting in a darkened house in the evenings, rather than turning on the lights by saying: “She preferred it sunk in the very element it was mean to exclude.” In the end, it is the love of this subversion which finally pushes Ruthie into drifting and the fear of it which leads Lucille towards a settled life.

The Grip of It has a very different take on domestic instability, in that it elicits nothing but panic for everyone. Married narrators, Julie and James, buy a new house in the suburbs to escape the emotional scars of their financial and marital issues. To them—to Julie, mostly—a house is a symbol of ultimate stability, a fortification against the assorted unsustainable aspects of modern urban life. But the house turns out not to be the protective force that they had imagined, and the couple is tortured physically and emotionally by unexplained disturbances: a constant and maddening sound, sourceless bruises, a growing stain on the wall, and other, more terrifying events. As the house falls into chaos, Julie and James’ sanity and marriage follows.

One could argue that the difference in tone between Housekeeping and The Grip of It (awe versus panic in response to the breakdown of home) is due mainly to genre. It’s true that The Grip of It, while considered a “literary” novel, exists firmly within the haunted house tradition of horror. But the haunted house has been looming into cultural consciousness for some time now. In a recent Jacobin article, film critic Eileen Jones discussed the trend as a symptom of post-2008 economic anxiety. Having described the spate of recent haunting-themed reality television shows, Jones posits that the people suffering from hauntings

With more people coming into adulthood already in debt, with less trust in banks and less money, the automatic conceptual conflation of house and security might be waning.

As in Housekeeping, the narrators of The Grip of It make their fateful move at the very beginning of the book, and with a suspicious ease. The couple finds a real estate listing quickly—they make an offer and close within the first few pages. But as charmed as their purchase may have been, Jemc immediately establishes the financial burden and uncertainty of homeownership when James says, “We drain the joint account on the down payment. I’ll need to pay my half on everything else to be sure we stay above water. In a town like this, only a couple of jobs match my skill set.” Unlike narratives in which the inheritance of one’s family home is assumed and invisible, Jemc acknowledges the difficulty of obtaining one now. Even more pointedly, we are told that the house was cheap because it was a foreclosure.

That the house is said to be a foreclosure (i.e. a manifestation of someone else’s misfortune at the hands of criminally irresponsible banks) foreshadows the curse that will befall Julie and James. The couple has their own history of debt, as well. It’s why they wanted to escape the city in the first place—to remove James from the temptation of gambling and them both from the pain of their past. The plot takes several terrifying plunges, and the house succumbs to a possibly supernatural decay until “The air of the house spoils even crisp paper.” The atmosphere of spoil surrounds the marriage, too, as well as the trust that they had sought to mend hastily, with the purchase of their home. Even when it becomes obvious that another move is necessary, it’s clear that, having bought the current place, Julie and James can’t easily afford to leave. This inescapability of the ruination of their home and partnership, the panic and hopelessness of that insecurity, is a far cry from the beautiful wreckage of Robinson’s house in Fingerbone.

Housekeeping is transcendent in its destruction of a home, whereas The Grip of It is terrifying in the same act. It is one of the great joys of reading fiction to see writers of different persuasions and moments wield the same motifs to drastically different effects. Whatever could be said about Robinson’s or Jemc’s style and skills, or about their readers’ tastes, both writers use ruined houses to lay bare their characters’ dreams and vulnerabilities. Still, decades do matter. Jemc’s dreams may be closer to the dreams of our time; her assault on their fortifications may hit closer to our homes.

Tags:Housekeeping, Jac Jemc, Marilynne Robinson, The Grip of It