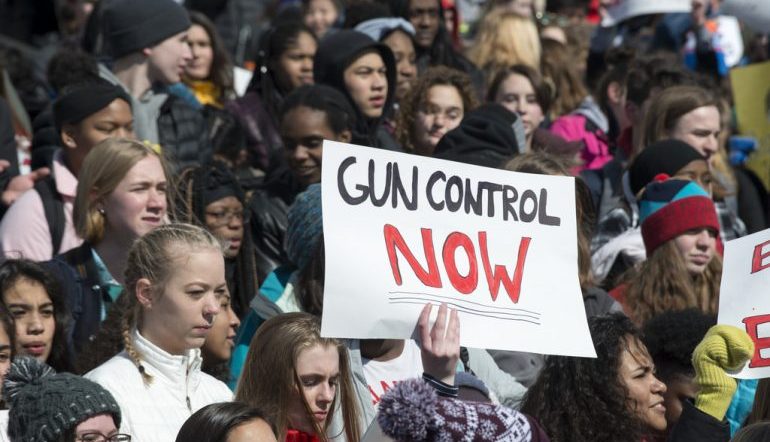 On August 1, I attended a March for Our Lives rally in Greensboro, North Carolina, one of the many stops on the organization’s Road to Change tour, a voter-mobilizing campaign for gun control reform led by several of the Parkland shooting survivors, including Emma Gonzalez and David Hogg. The rally featured a number of high school–age speakers from Parkland’s Stoneman Douglas High School and the Greensboro community. The eloquence and bravery of the speakers, all too young to vote, reaffirmed what I’ve long believed: young people are among our most passionate communicators, capable of incredible insight into the social systems in which they are not fully allowed to participate, as well as attuned to the nuances of the language they use when telling their own stories or demanding mass political action from adults. The rally’s rhetoric centered on access to firearms and the dangers it poses to other young people (the campaign’s slogan: Not. One. More.). A fifteen-year-old local speaker shared a story from when, during his fifth grade year, an active shooter came onto his elementary school’s grounds. Teachers evacuated the younger children, who were on recess, from the playground, ushering them into the music room where this young man was. “There’s a man with a gun and he’s going to kill us all,” a first-grader announced when the door was locked.

When I heard this story, I couldn’t stop thinking about Matthew Olzmann’s poem “Letter Beginning with Two Lines by Czesław Miłosz,” a long poem lamenting the overwhelmingly frequent occurrence of school shootings the gun violence children might encounter outside of school. According to the Washington Post, at the time of this writing there have been 221 school—secondary, not university or college—shootings since Columbine on April 20, 1999. “Can we agree Kevlar / backpacks shouldn’t be needed // for children walking to school?” writes Olzmann. It’s a rhetorical question whose power comes from the fact that it even needs to be asked. Olzmann continues, revealing that he once had a student “who opened a door and died.” The poem reveals that a thirteen-year-old was the shooter. As the speaker moves beyond this one incident in order to account for the incidence, the poem’s emotional resonance expands exponentially:

Did I say
I had “one” student who

There were many.
The classroom of grief

had far more seats
than the classroom for math

though every student
in the classroom for math

could count the names
of the dead.

I (and my own poetry) have become preoccupied with the threat of campus gun violence, not just because I teach at a university. (That said, the proximity of active shooter drills, the invitation by campus police to experience a demonstration featuring live gunshots inside a building so we will “know what they sound like,” and the receipt of a lockdown script all have a way of reiterating the threat in my daily life.) Erika Meitner’s “Threat Assessment,” a long poem toward the end of her new book, Holy Moly Carry Me, reiterates this concern, how it spans from a workplace to her son’s school. The speaker describes the five-hundred-seat auditorium in which her husband, an economics professor, lectures. She’s unable then to stop thinking about what could happen:

How easy
it would be, how efficient,
for a lone gunman to
target that one room.

Immediately after this thought, she receives an automated call from her son’s school notifying her that they are running a test lockdown:

I
think of my son huddled
with the rest of his class
in a supply closet trying
to be quiet in the dark.
I have two sons, and
I can’t protect either
of them from anything
at all.

The poem is an expression of hopelessness in the face of this violence. Our culture so often demands that we come up with answers, but this poem in particular reminds us that it’s also necessary work to recognize what one person can’t do, how one person feels in the face of so much violence. In Danez Smith’s “summer, somewhere,” a long poem from Don’t Call Us Dead that imagines (hopes for?) a kind of afterlife for the young black men who were the victims of police brutality, they write, “paradise is a world where everything / is a sanctuary & nothing is a gun.” As poets and readers of poetry, we might ask ourselves how our poetry provides a kind of sanctuary from violence or else offers us a place to work through our fraught reactions to a world in which something like the Parkland shooting can happen.